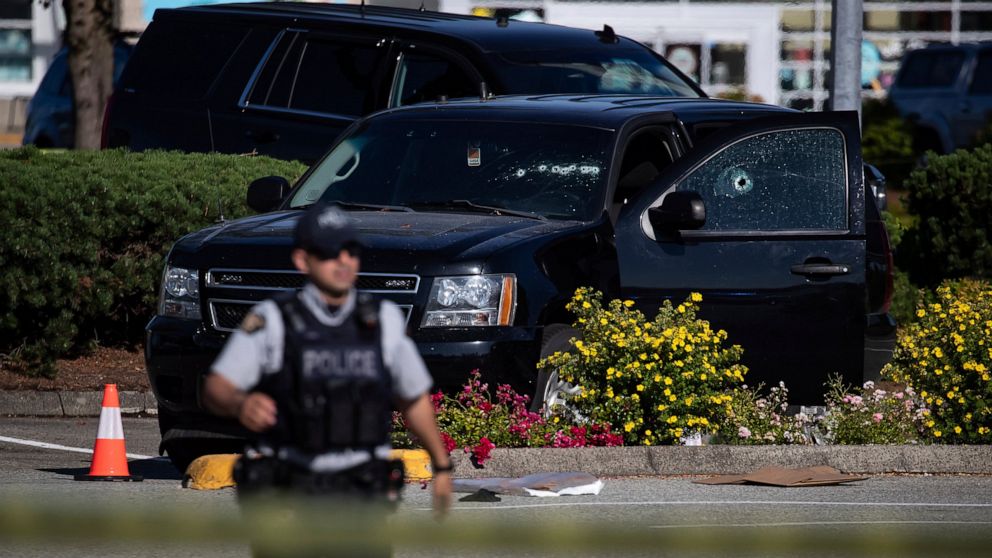 Canadian authorities say a gunman who roamed for hours through a sleeping Vancouver suburb shot four people, two of them fatally, as he opened fire at a casino, a center for the homeless and other locations before being killed by police

VANCOUVER, British Columbia — A gunman who roamed for hours through a sleeping Vancouver suburb shot four people early Monday, two of them fatally, as he opened fire at a casino, a center for the homeless and other locations before being killed by police, authorities said.

The attacks began in the wee hours in the bedroom community of Langley and continued until dawn, according to authorities, who initially suggested the shootings had targeted homeless people.

The first shooting occurred at midnight at the casino, with more shootings at 3 a.m., 5 a.m. and 5:45 a.m. — including at a residential complex that provides support for people who are transitioning out of homelessness. The other shooting scenes were a bus stop and a highway, police said.

Evidence of the all-night rampage was scattered around Langley, including an overturned bicycle spilling personal possessions onto a street and a shopping cart with someone’s belongings.

Police sent a cellphone alert to residents at 6:20 a.m., saying they were at the scene of several shootings “involving transient victims,” describing the gunman and asking people to “please remain alert and out of the area.”

But by then, the gunman was already dead. Sgt. David Lee, a spokesman for homicide investigators, later told reporters that it was not yet clear if the victims were homeless.

The Royal Canadian Mounted Police said an emergency response team confronted the suspect not far from a highway bypass where a man was found with a gunshot to his leg.

Police later identified the shooter as Jordan Daniel Goggin, 28, of Surrey, British Columbia. They are investigating the motive.

Authorities did not know if the shooter and his victims were acquainted, Bhayani said.

He told reporters that the suspect's death is subject to an investigation by the Independent Investigations Office of British Columbia, a civilian-led police oversight agency.

Besides the man with the leg wound, a woman was also wounded and was hospitalized in critical condition, police said.

The shootings roiled Langley, a town of 29,000 about 30 miles (48 kilometers) southeast of Vancouver. The town features a variety of shops and restaurants and boasts almost 350 acres (142 hectares) of parks. Many residents moved to Langley for its less expensive housing and commute to Vancouver, the largest city in the province of British Columbia.

Most of the shootings were in downtown Langley. One reported shooting was in neighboring Langley Township.

After the shooting began, ambulances and police vehicles converged at a mall. The area was cordoned off with yellow police tape and a major intersection was closed. A black tent was set up over one of the crime scenes. A homicide team confirmed on social media that its investigators deployed to Langley to help.

An unmarked police SUV at one of the shooting scenes, near a bus depot, had at least seven bullet holes in the windshield and one through the driver’s window.

Mass shootings are less common in Canada than in the United States. The deadliest gun rampage in Canadian history happened in 2020 when a man disguised as a police officer shot people in their homes and set fires across the province of Nova Scotia, killing 22 people.

The country overhauled its gun-control laws after an attacker killed 14 women and himself in 1989 at Montreal’s Ecole Polytechnique college.

It is now illegal to possess an unregistered handgun or any kind of rapid-fire weapon in Canada. To purchase a weapon, the country also requires training, a personal risk assessment, two references, spousal notification and criminal record checks.