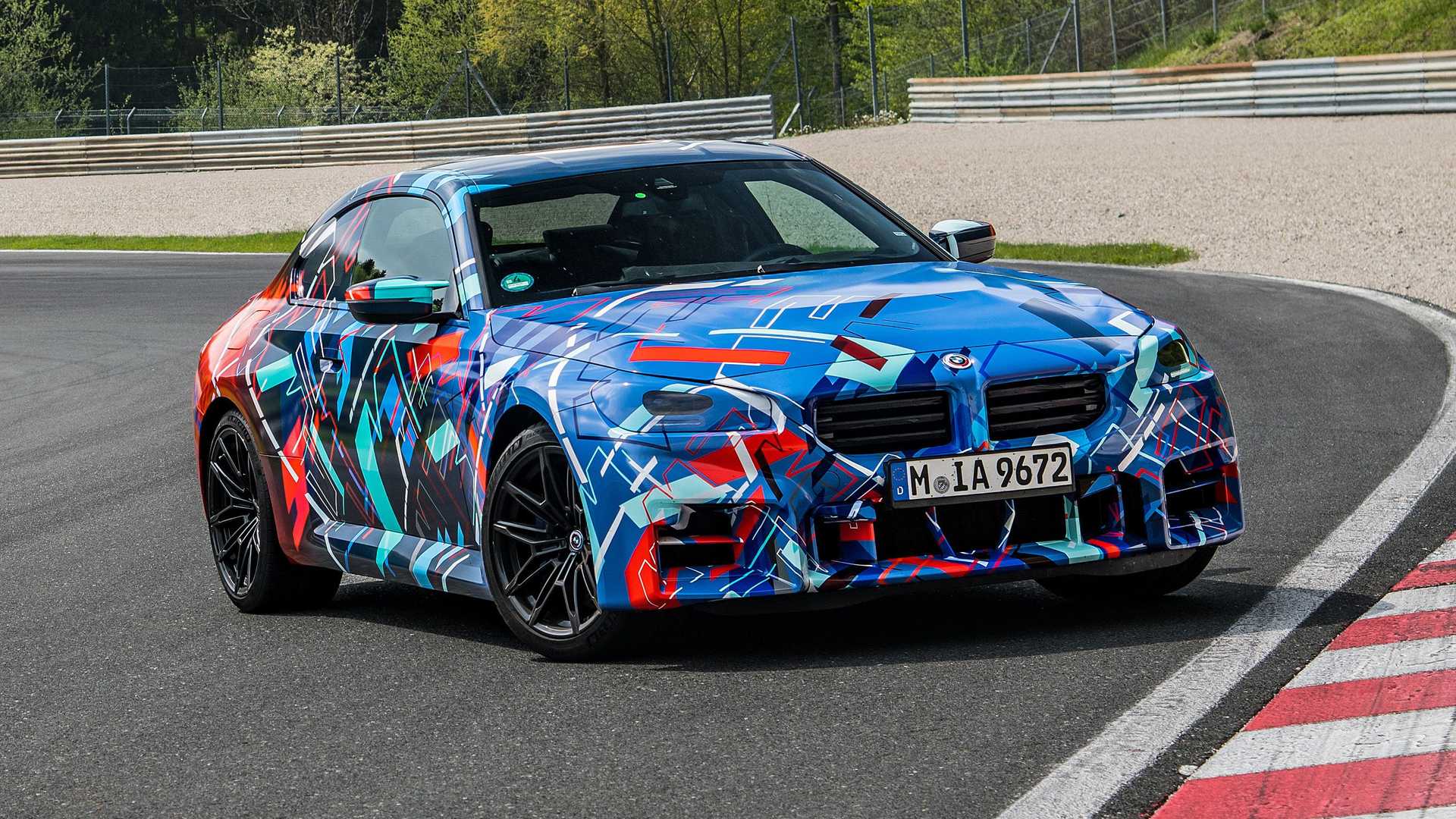 At least at launch, the M2 seems to be coming with rear-wheel drive.

The new BMW M2 debuts in October, reportedly on the 11th. A member of the Bimmer Post forum did some digging and found an internal document showing the S58 twin-turbo 3.0-liter inline six makes 453 horsepower (338 kilowatts) in this application.

If this document is accurate, then it would mean the version of the S58 in the M2 is a bit less powerful than the application in the X3 M and X4 M. That variant of the mill has 473 hp (353 kW). While the listing doesn’t show the torque figure for the M2, the powerplant in the performance crossovers has 457 pound-feet (620 Newton-meters).

The internal listing doesn’t list the M2’s gearbox, but it says the drive as “Heck,” which is the German word for rear or tail. This would mean the model is rear-wheel drive.

A previously leaked technical document showed that an all-wheel-drive M2 was also happening eventually. The system allegedly has five driving modes. The torque distribution prioritizes sending the output to the rear wheels until additional traction is necessary.

Judging from the camouflaged prototype (above), the M2 has more inlets in the lower fascia and horizontal slats in the upper grille. The ride height is lower than a regular 2 Series, and the fender flares are more pronounced. Quad exhaust outlets are below the rear bumper.

More To Know About The M2:

If the regular M2 isn’t exciting enough for you, there’s a rumor about BMW developing a hotter version that might wear the CS or CSL moniker. It would reportedly push the engine’s output to 473 hp (353 kW). Only an eight-speed automatic gearbox turning the rear wheels would be available. In addition to the extra power, there would be tweaks to the suspension and brakes. We have no details yet about when this model might debut.

BMW M division boss Frank van Meel confirms that the new M2 is nearly the end of the line for purely combustion-powered offerings from the team. Although, the upcoming, limited-run 3.0 CSL seems to be the actual finale. We already know that the next-gen M5 adopts a plug-in hybrid powertrain.

BMW Revived the 3.0 CSL With a Stick Shift and Crazy Power

AA DRIVEN COTY 2022: BMW iX is the best Luxury car of the year

Luxury cars should be state-of-the-art, lavishly equipped, spacious and comfortable. The BMW iX, the first of a new generation of battery electric vehicles (BEVs) from the German maker, is all of that. But it’s also our top Luxury car because it does something else top-level models should do: break new ...

A 16-year-old driver with a learner’s permit he had for about two weeks was speeding in a BMW sports car when he lost control and crashed into a Yonkers police sergeant’s vehicle, killing the officer, cops said Friday. The victim of Thursday’s deadly multi-vehicle collision also was identified Friday as ...

BMW has announced the indicative South African pricing for its upcoming XM super SUV, which made its debut at the BMW M Fest at Kyalami Raceway earlier this year. In South Africa, the high-performance luxury vehicle will have a starting price of R3,400,000 and is scheduled to go on ...


View more: What you can expect to pay for the BMW XM super SUV in South Africa

The preliminary South African pricing for the new BMW M2 has been revealed, showing that the sporty coupe will start at approximately R1,503,975 when it goes on sale next year. The second-generation M2 was revealed in October at the 2022 BMW M Fest which took place at Kyalami, and the ...

You’ve probably noticed this: small coupes are a hard sell these days. That’s why hardly anyone makes one these days. But the reputation that BMW enjoys today was built mostly on this type of car. Small and fast coupes like the legendary E46 and the earlier E36 M3s. So ...

Category A COE friendly all-new BMW X1 arrives in Singapore Singapore – It is an SAV, it qualifies for a Category A COE, and it has a badge. All the qualities which will make BMW’s new X1 sDrive16i an attractive buy for badge-conscious Singaporeans. But it still has a ...

Older BMWs are way cooler anyways, so perhaps we should take BMW's advice of “not to buy new vehicles”. Here's a funny one, one of BMW's leading officers has advised vehicle owners to continue using their existing cars and not to buy new vehicles for the sake of environmental preservation. ...

An armed crew robbed a man of his BMW at gunpoint in Midtown took it on a joyride before cops nabbed them early Thursday, police said. The man was standing next to his late-model car at 45th Street and Lexington Avenue – steps from Grand Central Terminal – when two ...

Why I decided to buy a used BMW 520i Touring: Ownership review

BMW X1 sDrive 18i review: the mini-SUV with maximum tech

Buying & living with my preowned BMW 318i (G20) in the Netherlands

All the special-edition BMWs revealed in 2022

BMW rounds off 50th anniversary year for M with sensational reboot of 3.0 CSL

The UK's most and least reliable cars for MOT tests including Vauxhall, BMW, Tesla & more

BMW M5 CS Gets Even More Power From Manhart, Tuned To Nearly 800 HP

BMW doubles down on EV and battery production investment

Iconic collector cars on auction in Joburg next week – Photos