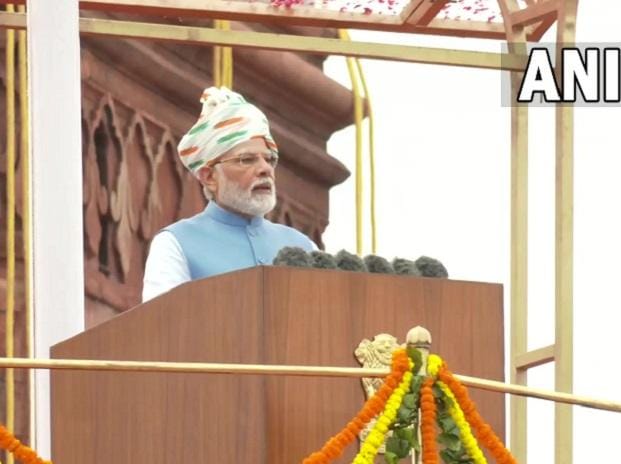 Prime Minister Narendra Modi unfurled the national flag on the 76th Independence Day from the ramparts of Red Fort in New Delhi. PM Modi greeted the nation and Indians living outside India on the 75th anniversary of independence.

“The people of our country made many efforts, did not give up and did not let their resolves fade away.” PM Modi said from the Red Fort.

He said that this is an auspicious milestone for all Indians to look back and get inspired to take the country ahead in the future. He paid his tributes to the freedom fighters who laid down their lives to gain independence from British rule.

He remembered heroes of our independence like Rani Lakshmi Bai, Tatya Tope, Mangal Pandey, Bhagat Singh, Chandrasekhar Azad, Ashfaaqullah Khan, Mahatama Gandhi, and Lal Bahadur Shastri, among others. He said that the nation will never forget their sacrifice and will try to feel inspired by their lives.

“Every India is filled with pride when they remember the strength of the women of India, be it Rani Laxmibai, Jhalkari Bai, Chennamma, Begum Hazrat Mahal,” PM Modi at Red Fort.

PM Modi said that the nation is forever indebted to the leaders and visionaries who showed the path to the nation after the independence.

He said that while there are so many names that the nation remembers on every Independence Day, many of them do get overlooked. However, this time, due to the Azadi ka Amrit Mahotsav campaign that started last year with Dandi March, the nation has been able to recognise and acknowledge the sacrifice of the lesser-known freedom fighters from obscure parts of the country.

“India is the mother of democracy. India has proved that it has a precious ability, and faced many challenges during its journey of 75 years,” said PM Modi.

Ed Sheeran vs Marvin Gaye: Thinking Out Loud copyright case explained - did star ‘steal’ Let’s Get It On ideas

I’m cycling from England to Iceland. Next up: the Faroe Islands

More than 40,000 rail workers are staging a fresh round of strike action this month after Mick Lynch’s RMT union confirmed plans for more walkouts. People travelling to events, including the , the Great Scottish Run in Glasgow and the , are likely to face major disruption. The RMT, which ...


View more: Train strike dates October 2022: when are the next RMT and Aslef rail strikes - which operators are affected?

KUALA LUMPUR – The move by Umno to push for snap polls in the last few months of this year has drawn flak from Malaysia’s opposition and a section of the public, with heavy rains and floods associated with the annual monsoon season just around the corner. A senior ...

Timothy Hiatt/Getty Images When he hits the mean streets of Chi-town on “Chicago P.D.,” Patrick Flueger’s Officer Adam Ruzek is often depicted carrying out a variety of action-packed stunts in the series. His character is the alpha cop who is first through the door when the squad busts their ...

The former Marine applied to Harvard just before the deadline


View more: From CIA to beer: Brendan Whitworth's path to CEO of Anheuser-Busch

Andy Dawson is unsure how long he will remain as Hull interim head coach following a dramatic day that began with the dismissal of Shota Arveladze and ended in a 2-0 defeat at home to Luton Town.


View more: Andy Dawson unsure over Hull City future after Luton loss - but will 'work hard for the badge'

Date of next general election REVEALED

'It's been painful for both of them': Hollyoaks' Callum Kerr 'SPLITS from fiancée Olivia Anderson'... just a year after they got engaged

Daniel Ricciardo: will outgoing McLaren driver be in F1 next season - where is he likely to find a 2023 seat?

The English - What We Know So Far

Auto companies are racing to meet an electric future, and transforming the workforce

In the wake of Hurricane Ian's destruction, Floridians are picking up the pieces

A bad year for Wall Street gets even worse, as stock markets finish September down

How local and national leaders are tested by major natural disasters

How D.J. LeMahieu fared in his return to Yankees lineup

Enough is Enough: where are protests planned in UK today - and what are they calling for?

Peep Show's Paterson Joseph: ‘Yes, David Starkey, we are rewriting history – because you wrote it badly’

A death in the family: Alison Russo lived a life of service