For the fourth time this season, Aaron Hicks was out of the Yankees lineup for a third straight game on Thursday night.

The first time, he was on paternity leave. The second time, he had a tight hamstring. The third time, he needed a few days off after fouling a ball off his shin.

This time, Hicks may have lost his grip on consistent playing time in the outfield. 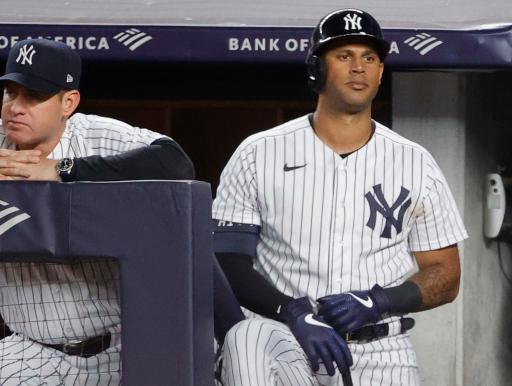 After a brutal game on Monday night, both offensively and defensively, Hicks has yet to make another start. And with Wednesday’s call-up of center fielder Estevan Florial, who is expected to get at least semi-regular playing time, Hicks’ role has seemingly changed in the process as the latest turn in his disappointing season.

“Yeah, there’s gonna be some opportunities for other guys,” manager Aaron Boone, who spoke with Hicks about his role after Florial’s promotion, said Thursday before the Yankees lost the series opener to the Blue Jays, 9-2, in The Bronx. Florial was 0-for-3 and was hit by a pitch with a run scored. “So he understands that. It’s also important to understand it can change on a dime. That’s one of the messages, too. Not playing today, that could change in 24 hours just from circumstances, taking advantage of opportunities, competition.

“All of a sudden — you think you’re at a low point right now, you could find yourself as a central figure in the most important game of the year moving forward. So baseball has a way of changing on a dime. His job right now is to prepare, be ready and try to take advantage of opportunities when they present themselves.”

Hicks had one of those opportunities to change his fortune on Wednesday night, when he pinch hit for Isiah Kiner-Falefa to lead off the ninth inning of a 4-4 game against the Rays (the Yankees won, 8-7, in 10 innings). The patient switch hitter worked an eight-pitch at-bat against reliever Ryan Thompson, but ultimately struck out and heard another steady dose of boos on his walk back to the dugout. 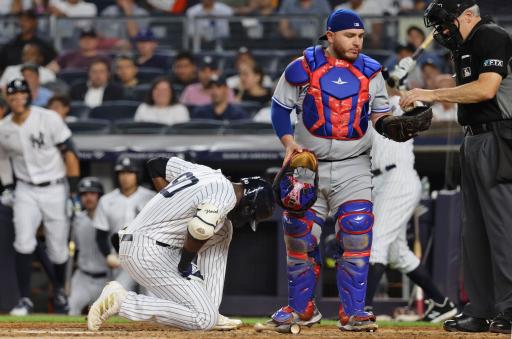 Estevan Florial, who is now playing in the place of struggling Aaron Hicks, gets hit by a pitch during the third inning of the Yankees’ loss.

Boone explained his decision to pinch hit Hicks as Thompson being a righty killer and needing a base runner, not necessarily a hit. Despite his season-long hitting woes, Hicks still has the third-best on-base percentage (.338) on the team.

Late Wednesday night, Boone tabbed it an “easy call,” but said Thursday that may have been a quick response, noting that he did take the human factor into the equation. Hicks’ confidence appeared to have taken a hit Monday when he came up empty in key situations at the plate and also made a defensive blunder in center field.

“I am factoring that in,” Boone said. “There’s also a level of, now where maybe some roles are changing, we gotta run to that a little bit and not shy away.”

Even before Florial was called up from Triple-A on Wednesday, the writing appeared to be on the wall for Hicks — who still has three years and $30.5 million left on his contract after this season — when the Yankees traded for center fielder Harrison Bader at the trade deadline. The difference was that Bader is currently injured and won’t be available until at least September.

In addition to a tough offensive year, after missing most of last season due to wrist surgery, Hicks has registered minus-five Defensive Runs Saved (per FanGraphs) in center field this season. He has three DRS in left field, but the Yankees traded for Andrew Benintendi to play there on a near-everyday basis.

Now, with Florial up for his latest Yankees stint and possibly getting his best chance for regular playing time after a strong campaign at Triple-A, Hicks’ opportunities for playing time could be tough to come by moving forward.

“I’m putting the work in, trying to do my best to compete every single day, especially for this team,” Hicks said Monday night. “Everything I’m doing is just not showing up result-wise.”