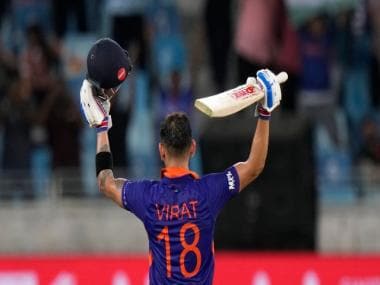 Virat Kohli was ecstatic after he brought up his 71st international century and said that he has a lot of cricket left in him after the completion of India’s innings against Afghanistan at the Dubai International Stadium on Thursday.

Kohli scored a massive 122 off 61 deliveries, scoring at a strike rate of 200 and surpassing Rohit Sharma’s 117 to become the highest scorer for India in a T20I innings.

After the Indian innings, team members including Batting Coach Vikram Rathore, Head Coach Rahul Dravid, Bhuvneshwar Kumar, Hardik Pandya, Yuzvendra Chahal, and others came out to the field to greet Kohli for his achievement.

The players congratulated him and hugged him as the master was back to his best, hitting a century after more than 1000 days.

While Bhuvi greeted him, he said “abhi hai cricket baaki.”

Kohli dedicated his century to his family – wife Anushka Sharma and daughter Vamika and also kissed his ring while celebrating the century.

India beat Afghanistan by 101 runs as they were restricted to 111/8 while chasing after India put up a mammoth 212 on the scoreboard.

Florida beach chucks up a weird 80 feet object, what it is remains 'a mystery' Florida is notorious for strange happenings, from fearless residents battling gators to wacky plans of “shooting down” hurricanes, the internet is full of at times unbelievable stories from the US state. Now, a mysterious ...


View more: Florida beach chucks up a weird 80 feet object, what it is remains 'a mystery'


View more: Student gets stuck between train and platform in Visakhapatnam, rescued | Watch

Male Infertility: What Men Can Do To Improve Sperm Quality And Natural Conception Chances Having children is a joyous and challenging experience in equal measure. Infertility is one of the biggest challenges that modern couples face today. Some people don’t realize they desire to start a family until later ...


View more: Male Infertility: What Men Can Do To Improve Sperm Quality And Natural Conception Chances

Mumbai: King and queen from Gujarat make SGNP their home The Sanjay Gandhi National Park (SGNP) on Tuesday welcomed a lion and a lioness, who were brought from the Sakkarbaug Zoological Park in Gujarat. The Maharashtra Forest Department said they will soon write to their Gujarat counterpart for another ...

watch: out of starting xi, ronaldo walks off the pitch while his teammates celebrate portugal’s win with fans In their Round of 16 match of the ongoing FIFA World Cup in Qatar, Portugal was up against Switzerland on Tuesday night (Wednesday IST). The final Round of 16 match was ...


View more: WATCH: Out of starting XI, Ronaldo walks off the pitch while his teammates celebrate Portugal's win with fans

NIIF to invest in 3 GMR airports; Mopa to get Rs 631 crore NEW DELHI: The National Investment and Infrastructure Fund will invest in three of GMR airports, including the Greenfield ones at Mopa, Goa, and Bhogapuram, Andhra Pradesh. GMR Airports Limited (GAL), the airport business holding entity and ...


View more: NIIF to invest in 3 GMR airports; Mopa to get Rs 631 crore

‘What a shame’: Cristiano Ronaldo’s girlfriend lashes out on Portugal’s manager for benching him against Switzerland

Vishal Jethwa on a long gap after debut film: ‘I received the best debutant award for Mardaani 2, spent pandemic looking at it’

Breaking the stereotypes: Bride dressed as groom, father carries out her 'baraat'; know what happened

Signs you are exercising too much; can cause heart attacks, cardio-issues