After 3rd major storm in 5 years, Magdalen Islanders say they're on 'front line' of climate change

Isabelle Cormier spent the days after post-tropical storm Fiona picking through what could be salvaged of her family’s 40-year-old cottage.

Among the soggy treasures strewn on the ground: a troll doll, so old its hair was gone, a large cooking pot, and a single oar — a fitting souvenir for a family that loves boating.

The cottage, hand-built by the family using driftwood, collapsed like a house of cards during the storm.

All that remains is the roof, a window covered in children’s stickers and a limp electric wire, waving in the wind.

“A good friend of mine called me early in the morning, Saturday morning, and said ‘I’m so sorry,'” said Cormier.

But she had known the day was coming when the building would collapse. It was long protected by a sand dune so high that people inside the could only see the water from the top floor.

Over the last three years, storms — including 2019’s Dorian — winnowed that sand dune down to nothing. By the time Fiona hit, the cottage was fully exposed to the elements.

“My grieving, I did it when Dorian hit. I knew that was going to be it,” she said. “It’s emotional now … because it’s a place for us, for our family, and it’s got a great deal of soul.” 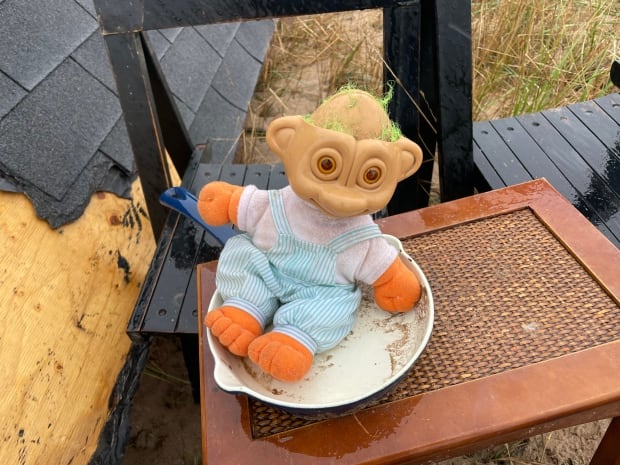 On Sunday, members of Isabelle Cormier’s family cleaned up the wreckage of her cottage, including picking up personal items (such as this troll doll) from the ground.

Fiona is the third major storm to hit the Magdalen Islands in five years, according to Serge Bourgeois, the director of urban planning for the municipality, which has a population of about 12,000. (Another 465 people live in Grosse Îsle, a mostly English-speaking island which is a separate municipality.)

Storms are speeding up erosion but even without major weather events, research from the Université du Québec à Rimouski (UQAR) shows that the Magdalen Islands are losing land mass faster than they did before.

One study shows that between 1963 and 2008, the islands’ shorelines eroded an average of 24 centimetres per year. More recent UQAR studies have found that loss has nearly doubled since 2005, to 46 centimetres — or nearly half a metre — per year.

The sand and dunes, described by Cormier as the islands’ “flesh and blood,” are vanishing at an alarming rate, she said.

“Us islanders are on the front line of the climate change,” said Cormier. “The real impact, the real grieving, it’s the erosion.”

Fight to save the Maggies

Since 2018, the three levels of government have spent more than $50 million to fight shoreline erosion on the Magdalen Islands.

Visiting the islands in the storm’s aftermath on Monday, Coalition Avenir Québec Leader François Legault promised an additional $100 million and the creation of an office to co-ordinate efforts to stall erosion on all affected shorelines, including on the Gaspé Peninsula and along the Lower North Shore.

“It’s a step in the right direction,” said Bourgeois. “The 100 million dollars is one thing, but the office is an excellent idea.” 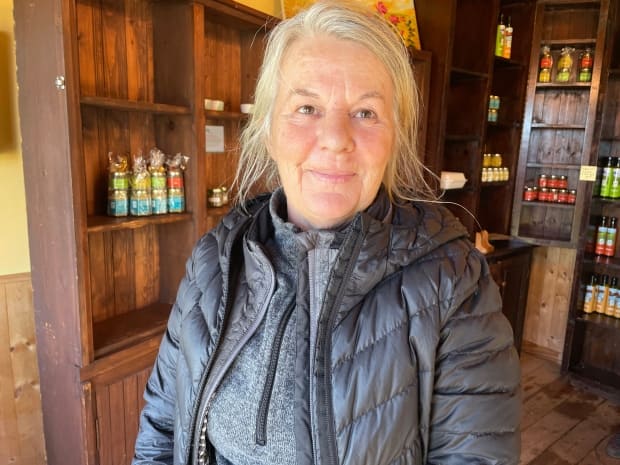 Nouane Giguère, owner of L’Anse aux Herbes in La Grave, said her store experienced about a foot of flooding during post-tropical storm Fiona.

Recent efforts to prevent erosion have already made some difference, locals say.

In La Grave, on the southern side of the archipelago, the province and the municipality shared the $7.4 million cost of fortifying the pebble beach ahead of more storms.

Small seaside stores flooded. However, the owner of one of them, called Anse aux Herbes, said things could have been much worse.

“What we are really happy about is they put down the rocks to break the waves, and that was helpful,” said Nouane Giguère, who spent Sunday cleaning and assessing damage after her store took on about a foot of water.

“Without it, it would be really, really more dramatic.”

But with the latest evidence of just how much damage one ferocious storm can wreak, many islanders hope political leaders can now see the urgency of the situation and just what it will take to save their foothold in the Gulf of Saint Lawrence. 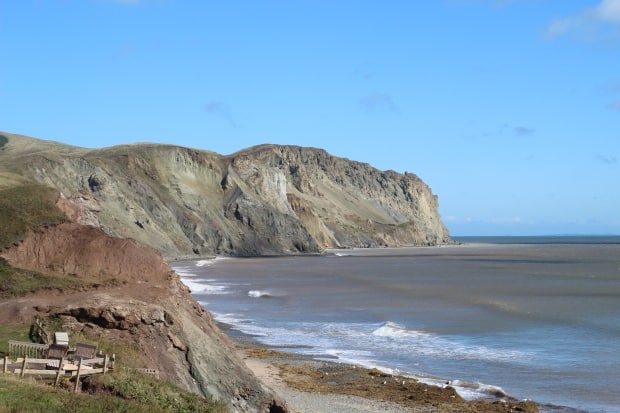 Post-tropical storm Fiona ended around 10 p.m. Saturday on the Magdalen Islands in the Gulf of St. Lawrence, with winds surpassing 150 km/h times.

A Senate breakthrough on immigration might still be a long shot

Queen Camilla Is the Cover Star of 'Good Housekeeping' — and Kate Middleton Is Also Featured in the Issue!

Graphic: Thompson gets stitched up, has broken hand

Porsche up on DAX promotion; Puma shrugs off exclusion

After hit-and-run, B.C. woman in wheelchair claims ICBC is granting her the ‘bare minimum’

Alleged serial killer’s estranged wife says she is overwhelmed by survivor’s guilt: ‘Why did I get to survive’

Erin Leszkovics couldn’t hold back tears while reliving some of the pain and abuse she says she’s endured over the years. The estranged wife of an alleged serial killer is grappling with her emotions and says she is overcome with extreme guilt after hearing her ex is now charged ...


View more: Alleged serial killer’s estranged wife says she is overwhelmed by survivor’s guilt: ‘Why did I get to survive’

A black bear goes through garbage in this photo taken during by a B.C. Conservation Service officer responding to a call in Whistler in 2014. A Supreme Court of B.C. judge has ruled a $60,000 penalty levied against a Whistler woman for feeding bears was excessive. According to a ...

Jude Law, Cameron Diaz in “The Holiday”. Director Nancy Meyers has responded to rumours that a sequel to “The Holiday” is on its way. The beloved 2006 flick saw Kate Winslet’s Iris and Cameron Diaz’s Amanda swap houses. Winslet’s character ended up dating Jack Black’s Miles after they met ...

By Rod Nickel WINNIPEG, Manitoba (Reuters) – Fertilizer producer Mosaic Co said on Tuesday that it has temporarily curtailed potash production at its Colonsay, Saskatchewan, mine in Canada, citing slower-than-expected demand. Mosaic said in a statement that its inventories are adequate to meet demand in the short term. The company ...

Vancouver Aquatic Centre in Vancouver, B.C., June 27, 2022. Vancouver council approved a $730 million capital budget Tuesday for 2023, but put off a decision about the operating budget — which includes major items such as policing — until next year. The 2023 capital budget is the first step ...

After years of being in survival mode, a local bakery owner is closing up shop and calling for more to be done to support small businesses in Windsor. Gabby Jedlinski, the owner-operator and head baker of Bad Witch Bakery, said it was a painful decision to shut her doors, but between the pandemic, ...

2 Dividend Stocks That Could Lead a 2023 Rally

Extreme cold warnings issued for all of southern, central Manitoba

A bat infestation at a Nevada fire station is so bad, the department is abandoning the building

‘I don’t know how to stop Messi!’ - De Jong has no secret World Cup plan to help the Netherlands

Paralyzed Dog Rescued After Being Found on Train Tracks in Philadelphia: 'This Is Pure Evil'

Will Ferrell Joins His Son Onstage To Play His Iconic Cowbell

Opinion: Why Justice Alito's 'jokes' are so stunning

The Most Popular Shows On Netflix Right Now Besides 'Firefly Lane'

Veteran Iowa Player Announces He Will Be Transferring

Even with NFL's best record, Eagles fans have reason to dream over mock drafts

Langley, the township, is interested in breaking up with Langley, the city, on RCMP costs

Three-time champion Rachel Homan off to winning start at Masters

America can no longer remain silent about its antisemitism problem

On The Money — Will Biden’s rail deal backfire?