“We’re playing right now, I think the way that we were expecting ourselves to play early in the year,” Pujols said. “We didn’t, but we had some glimpses here and there. Now we’re playing the best baseball we have played all year long.”

“He looks the same as when he left to me,” Wainwright said. “This is what he’s supposed to look like, here this stadium, doing these things.” 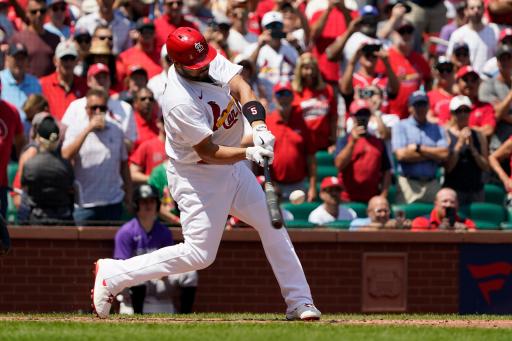 Albert Pujols crushed a grand slam in the third inning. 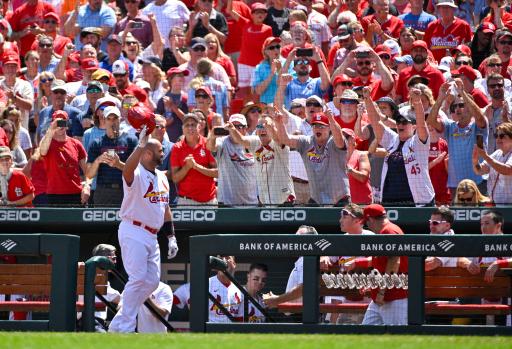 Albert Pujols takes a curtain call after his grand slam.

The Elias Sports Bureau said the Cardinals were the first team in big league history to have a player at least 40 years old hit a grand slam and another at least 40 to pitch seven shutout innings in the same game. Pujols is 42, two years older than Wainwright.

The Rockies lost starting pitcher Antonio Senzatela and right fielder Charlie Blackmon in the second inning to leg injuries. Senzatela crumpled to the ground after attempting to cover first base and Blackmon was removed an inning after beating out an infield single.

Rockies manager Bud Black said Blackmon is not expected to go on the injured list, but will probably not start in the next game. He wasn’t as confident on Senzatela’s outlook. Both players will be re-evaluated tomorrow.

“Antonio is going to get a MRI in the morning,” Black said. “He definitely has a (left) knee sprain to a certain extent. How significant? We won’t know until tomorrow. Devastating, right?”

The NL Central-leading Cardinals won their fourth in a row and sent Colorado to its fifth straight loss. St. Louis has won 12 of its last 13 home games and has taken 12 straight from the Rockies at Busch Stadium.

Pujols hit his 690th career home run, connecting off Austin Gomber and capping a five-run third that made it 10-0. It was Pujols’ 16th career grand slam — his first as a pinch hitter — and it moved him into a tie with Hank Aaron, Babe Ruth and Dave Kingman for 10th-most slams of all-time. 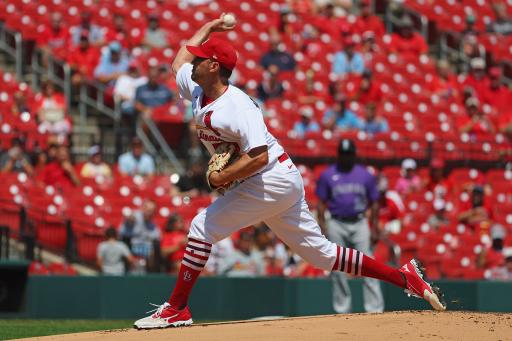 Adam Wainwright pitches on Thursday during the Cardinals’ win over the Rockies.

Cardinals manager Oliver Marmol said went with the unconventional decision to pinch-hit Pujols in the third inning for designated hitter Brendan Donovan because he liked the matchup against Gomber.

“He’s been killing lefties,” Marmol said. “The game’s never over, but you can put the game away there with a good swing and it’s always good to get the crowd engaged. We felt good about it and he did his job.”

“I think at the end of the day, just being part of a great organization, a great group of guys that want to win, young players they’re watching, I’m blessed to be here, and just help those guys out,” Pujols said. “It’s fun, trust me.”

Wainwright (10-9) gave up three hits, two of them infield singles. He struck out seven, walked none and retired his final 13 batters. 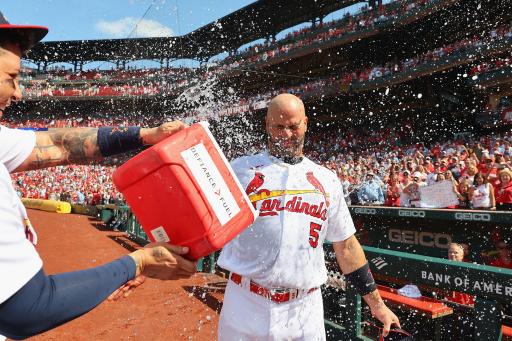 “My job today it was just to not mess it up,” he said. “The offense was the story. They were incredible you know and Albert hitting the grand slam, I mean we’re just kind of like living in his shadow right, which is where we should be.”

Génesis Cabrera and Chris Stratton each pitched a scoreless inning of relief to complete the four-hitter.

Netflix The drama series “Sweet Magnolias,” based on the novels by Sherryl Woods, came to life in 2018 when Netflix ordered 10 episodes of the series for production (via Variety). It released its first season in May 2020 and quickly became a hit. The show dominated the Netflix Top 10 globally ...


View more: Sweet Magnolias Season 3 - What We Know So Far

Good morning, and welcome to L.A. on the Record — our local elections newsletter. It’s Julia Wick, with help from David Zahniser, Jeong Park and Ben Oreskes. Newsletter Get the lowdown on L.A. politics In this pivotal election year, we'll break down the ballot and tell you why it ...


View more: L.A. on the Record: Best frenemies skirmish in the Sepulveda Pass

'He threw me under the bus': Married At First Sight UK's Lara slams husband Richie as 'fake' and 'dishonest' as she claims he played up to the cameras on the show

Tennessee WR Cedric Tillman out against Florida due to ankle injury, sources say

In Lebanon, boat tragedy kills 89 but others plan to migrate