A day after concluding that Infowars founder Alex Jones must pay the parents of a 6-year-old boy killed in the 2012 mass shooting at Sandy Hook Elementary School $4.1 million in compensatory damages for falsely claiming that the massacre was a hoax, a jury in Austin, Texas, on Friday ordered Jones to pay an additional $45.2 million in punitive damages.

In all, the jury ordered Jones to pay $49.3 million in damages — less than the $150 million sought by Neil Heslin and Scarlett Lewis, whose son Jesse was killed in the Dec. 14, 2012, attack in Newtown, Conn.

The punitive phase of the trial featured one witness — forensic economist Bernard Pettingill — who estimated the combined net worth of Jones and his media company Free Speech Systems to be between $135 million and $160 million. Jones claimed in court that he has a negative net worth of $20 million.

Pettingill said he based part of his valuation on Jones’s “rabid” fanbase. 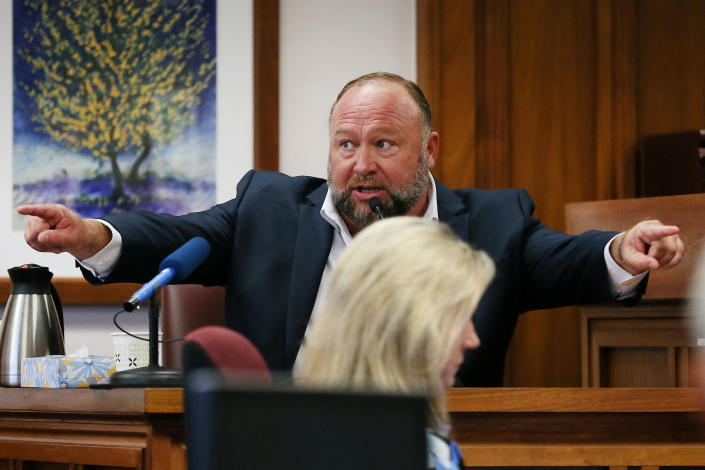 Alex Jones testifies at the Travis County Courthouse during his defamation trial in Austin, Texas, on Tuesday. (Briana Sanchez/Reuters)

“He is a very, very successful man,” Pettingill said in his testimony. “He didn’t ride a wave. He created it.”

On Thursday, the same jury awarded Heslin and Lewis $4.1 million for defamation as a result of Jones and Infowars spreading the conspiracy theory that the attack that killed their son and 19 other children and six educators nearly a decade ago was staged.

Heslin and Lewis sought $150 million. Lawyers for Jones argued that he should pay $8 — one dollar for each of the compensation charges the jury was considering.

Ten of the 12 jurors agreed on the verdict — the minimum number required for a decision in the compensatory phase. In awarding punitive damages, the verdict must be unanimous.

Wesley Todd Ball, a lawyer for the parents, thanked the jury for helping to restore Jesse’s “honor” and implored the panel to punish Jones for his defamatory claims.

“We ask that you send a very simple message,” Ball said Friday. “And that is, stop Alex Jones. Stop the monetization of misinformation and lies. Please.

“That man will sit here and spew his lies and misinformation as long as he keeps getting a check,” he added. “He’s not going to stop. They won’t stop unless you stop them.”

Ball asked that the jury award $145.9 million in punitive damages — which would bring the combined total to the $150 million figure that the parents were seeking. 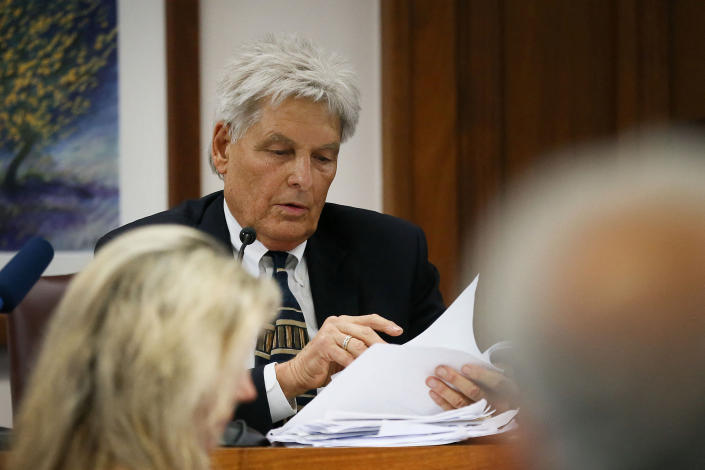 Jones — who has continued to host his daily Infowars show throughout the trial — was not in court on Thursday or Friday.

Taking the witness stand in his own defense earlier this week, Jones sought to portray himself as a victim who had been “typecast” for claiming the shooting was staged — and said that he now believes the massacre actually happened.

Later in his testimony, however, Jones added a baseless caveat to his concession.

Heslin and Lewis told the jury that such false claims made by Jones and his Infowars guests have made their lives a “living hell.”

“Alex lit the flame that started the fire,” Heslin said during his testimony Tuesday. “Other people brought some wood to add to it.”

Judge Maya Guerra Gamble admonished Jones several times during the trial for speaking out of turn and going off on tangents during his testimony.

“This is not your show,” Gamble said.

Jones walks into the courtroom on July 28. (Briana Sanchez/Reuters)

The trial was the first of three separate defamation cases against Jones stemming from his portrayal of the Sandy Hook massacre as a hoax.

Jury selection began earlier this week in Connecticut in a separate trial to determine how much Jones must pay the families of eight of the victims and an FBI agent for his false claims. (The selection process was temporarily halted as Jones’s attorneys asked that the trial be delayed after Free Speech Systems filed for bankruptcy protection.)

Jones is also facing a potential new legal fight with the House select committee investigating the Jan. 6, 2021, attack on the U.S. Capitol.

While he was on the witness stand Wednesday, Jones learned that his lawyers accidentally sent two years of text messages from his cellphone to Mark Bankston, an attorney for the plaintiffs — and then failed to note that the messages were protected under attorney-client privilege.

Bankston said Thursday that the committee has requested the text messages and related documents, and that he intends to turn them over unless he’s instructed not to do so.

On Friday, Gamble said she would not prevent Bankston from giving Jones’s text messages to the committee. “I’m not standing between you and Congress. That is not my job. I’m not going to do that,” she said.

From Kareena Kapoor Khan to R. Madhavan, this is how actors have reacted to boycotting of Bollywood

When does House of the Dragon come out on NOW TV?

She-Hulk: Tatiana Maslany explains why she lied about Marvel casting

Aamir Khan on his character in Laal Singh Chaddha: None of us questioned why he is a Sikh

Koffee with Karan: Kiara Advani reveals Sidharth Malhotra is 'more than a friend'

Designer Hanae Mori passes away at 96

Hanae Mori Designer Hanae Mori, known for her elegant signature butterfly motifs, numerous cinema fashions and the wedding gown of Japan’s empress, has died, her office said Thursday. She was 96. Mori symbolized the rise of Japan as a modern, fashionable nation and the rise of the working woman. ...

Vijay Varma on Working with Alia Bhatt in Darlings: She is one of the finest switch on switch off actor I have ever seen

Vijay Varma, an Indian actor, started his career as a theatre artist and did numerous plays. He got his first break in the short film ‘Shor.’ He is a film fanatic and watches at least one film everyday. He worked with Alia Bhatt, Shefali Sharma and Vijay Maurya and ...


View more: Vijay Varma on Working with Alia Bhatt in Darlings: She is one of the finest switch on switch off actor I have ever seen

The Lord of The Rings is now under new management (Picture: Pierre Vinet/New Line/Saul Zaentz/Wing Nut/Kobal/REX/Shutterstock) The same company that bought Tomb Raider and Crystal Dynamics now owns Lord of the Rings, Limited Run Games, and Tripwire Interactive. There’s been a lot of, understandable, concern from fans about Microsoft ...


View more: Lord of the Rings licence bought by Embracer Group instead of Amazon

Amol will be taking over from Jeremy Paxman (Picture: BBC / REX) The BBC’s current media editor Amol Rajan will take over as the University Challenge quizmaster from Jeremy Paxman in 2023. Jeremy, 72, confirmed he would be stepping down from the role earlier this week after nearly three ...

The six-episode series is set inside the halls of government and interwoven with stories from around the country.

Academy Award and BAFTA-winner Kenneth Branagh stars in the new Sky Original This England chronicling the rise and fall of Boris Johnson.

Lauren Goodger picks up baby Lorena’s ashes after newborn’s death: ‘She’s at home with us’

What time is She-Hulk on Disney Plus?

Anne Heche's cause of death revealed: 'Inhalation and thermal injuries'

It’s that time of year: Jeremy Clarkson blesses us with yet another A-levels inspirational message of wonder on results day

‘You can’t act!’ 26 movie co-stars who disliked each other in real life

James Bye: Who is the Strictly Come Dancing 2022 contestant and what is he famous for?

Kid Cudi reveals he suffered a stroke in rehab in 2016: ‘Everything was f***ed’

How Shah Rukh Khan's family is the illustration of a secular India!

Look Both Ways is slight, simple and surprisingly perceptive

Raised by Wolves review: Richly imagined sci-fi allegory about parenting in the time of war and dogmatism

‘We were not willing to be silenced’: Cosey Fanni Tutti on the unsung heroine of electronic music

Drashti Dhami on Duranga: There were times I would be lost in my scenes and Gulshan would help me

Opinion | Why Arjun Kapoor, of all people, should stay silent on #BoycottBollywood debate

Vijay Deverakonda: 'Liger has been the hardest & most challenging film for me physically, mentally & performance wise'

Janmashtami 2022: Bollywood dahi handi songs to add to your playlist

The 10 biggest Netflix movies in the world this week

Only Murders In The Building fans rocked by bombshell twist ahead of season 2 finale: ‘This show never fails to amaze me’

We know exactly where She-Hulk fits on the MCU timeline

Can House of the Dragon save the Game of Thrones franchise?