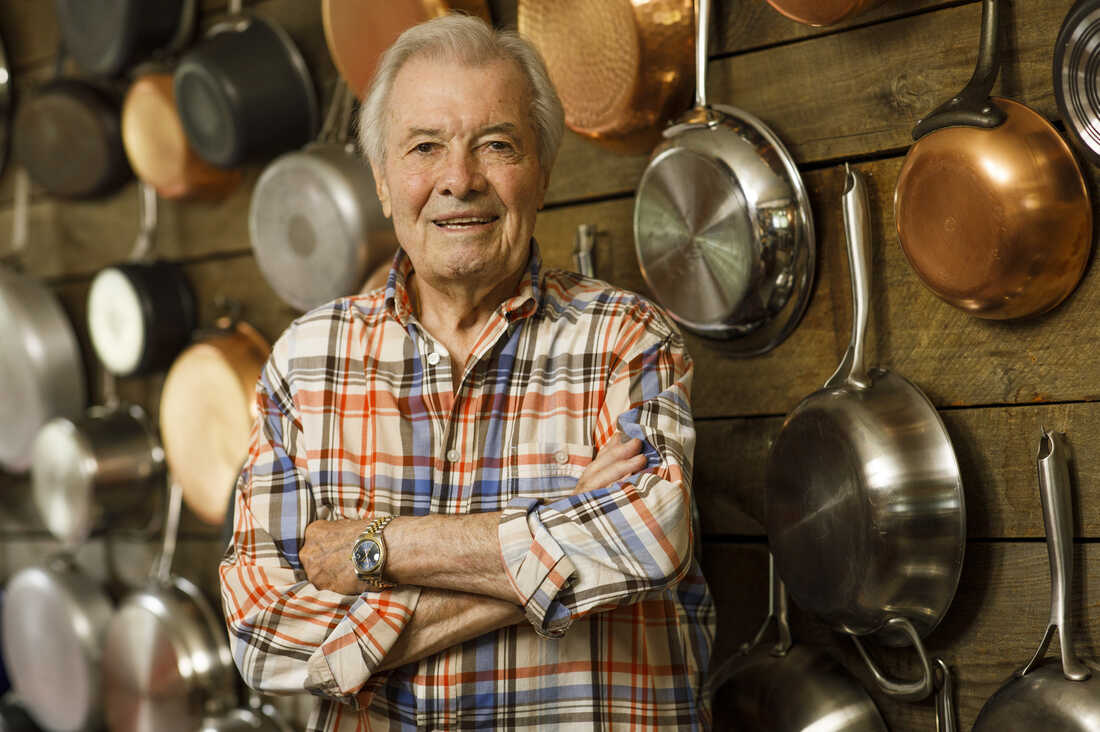 Jacques Pépin, pictured in his home in Connecticut in August, has a new book called Art of the Chicken. Carlin Stiehl for The Boston Globe via Getty Images hide caption

“Proust had his madeleine, I have chicken,” writes Jacques Pépin at the start of his new memoir. Pépin, who has been cooking since he was 13, says no ingredient brings him more joy than chicken. Except — perhaps — the egg.

“As a chef, I stand in awe of the humble bird’s contributions to world cuisine. As an artist, I marvel at the iridescent colors and varied beauty of its plumage,” Pépin writes.

Now 86 years old, Jacques Pépin has a Lifetime Emmy award for his various television projects, 16 James Beard Awards, and France’s Legion of Honor. He has cooked with Julia Child and for former French president Charles de Gaulle. Pépin has authored more than 30 cookbooks and spent his career showing millions of Americans how good food can both nourish and spice up our lives.

His new book is called Art of the Chicken: A Master Chef’s Paintings, Stories, and Recipes of the Humble Bird.

Jacques Pépin spoke about his long career and his art with NPR’s Scott Simon. Here are excerpts from that conversation, edited in parts for clarity and length.

On cooking, eating and painting chicken

Being born in Bourg-en-Bresse, for me the Bresse chickens are considered one of the greatest chickens in France. They are beautiful white chickens with blue feet and a red comb, so bleu, blanc, rouge — the color of the French flag. Anyone who comes to Bourg will have chicken. From cold chicken in aspic, to chicken with cream sauce and tarragon, to pâté. It’s a very democratic meat. It exists from truck stops to three-star restaurants with truffles under the skin.

I realized I was doing a fair amount of illustrations of chicken and so I decided to do a book of chicken. 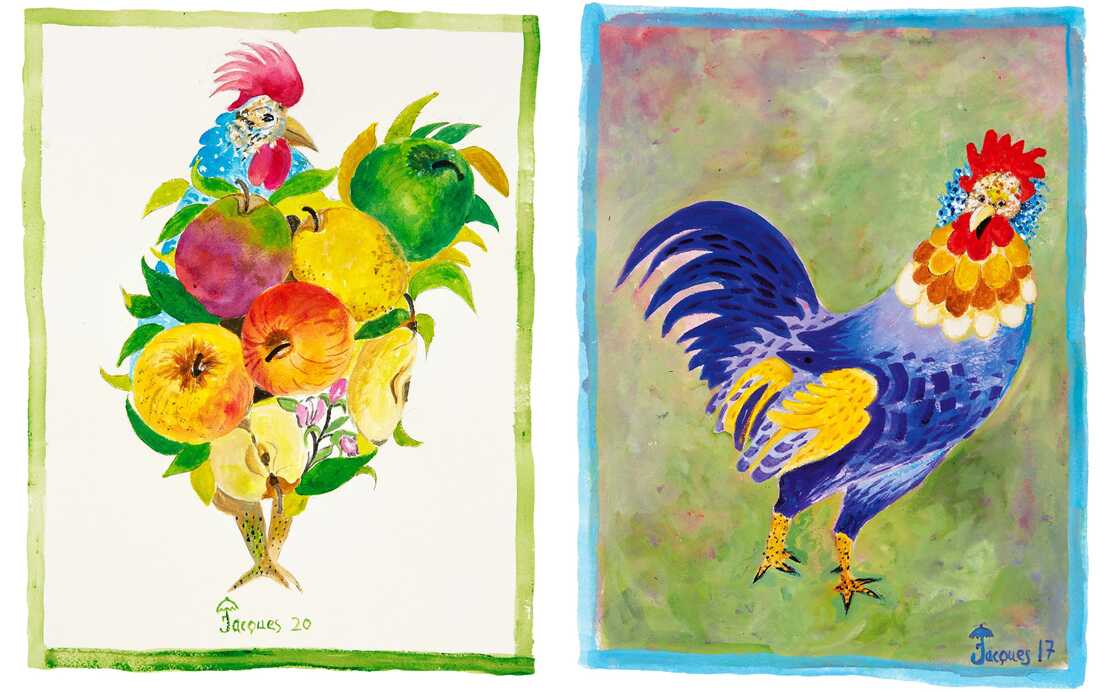 There are similarities [between painting and cooking]. Without any question, I am better at cooking because I am better trained. When you work at a restaurant, someone orders chicken sauteed with morels, whatever. And then 15 minutes later you have another order and you have like six, eight, 10 orders of the same dish, the same evening, it will never be the same exactly. Maybe it’s a bit thicker. It looks a bit dry, you put two tablespoons of water. I react to what the food looks like. Taste, adjust, taste, adjust.

And to a certain extent the similarity with the painting, for me. When I start a painting, often I don’t know where I’m going too much, but at some point it takes hold of me. And then I react to it. I put that color, shape just because it feels good. So similar, to a certain extent, to the process of cooking.

At the time it was another world. The cook was really at the bottom of the social scale. You tried to sneak behind the door to see the guests, but if anyone came to the kitchen it was probably to complain about something.

When you deal with state dinners, like with [President] Eisenhower, then you deal with the protocol usually. Otherwise, during the week, on Monday I’d usually sit down with [Madame Yvonne de Gaulle] and do the menu for the week. And certainly on Sunday they were very devout Catholics. So after church it was the family dinner, children, grandchildren and so forth. So at that point they ate what they wanted, the way they wanted. Madame de Gaulle [would say], “I want a leg of lamb, not too rare, it’s no good for the president.”

I remember the foreign minister came back from Russia with, like, three cans of two kilos each of beluga caviar. So we had caviar in the kitchen for a while. And at some of the points de chasse présidentiels, hunting ground in Rambouillet and so forth, they would sometimes bring me, like, eight, 10, 12 pheasants. Which I had to pluck to do pâté. Otherwise … it was pretty mundane.

On cooking with Julia Child

I had a friend of mine, Helen McCullough, a food editor. Helen told me, “Oh, I have that woman from Boston here. She’s coming next week. You want to cook?” I said, “Yeah, sure.” She said, “She’s a very tall woman. She has a terrible voice.” So that was, of course, Julia. So we became friends in 1960. So we were friends for half a century, basically. And that means that we argued all the time, but we drank a lot of wine, too. 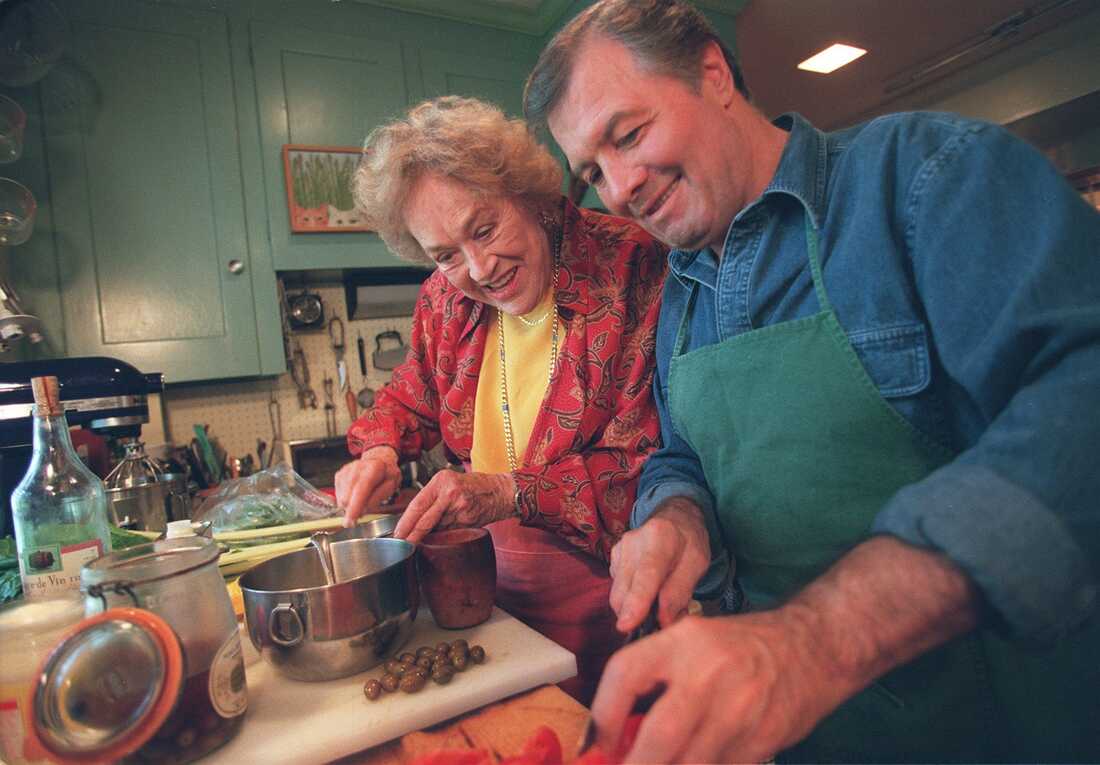 I started doing a show at KQED. I did 13 series of 26 shows. So that’s hundreds of shows. [After the first two shows] they said, “You have to do it on time. It’s too expensive to edit.” So it was like 29 minutes of cooking, I had like three recipes to do, sometimes four. So you have a guy going by with a sign: 14 minutes, 12 minutes, 9 minutes, 3 [minutes], wrap up. So it could be pretty stressing. When we did it with Julia, she said, “OK, we’re going to cook and when it’s finished, we’ll tell you.” I think some of the shows were over an hour.

The second thing is — usually when you do a television series, you come with at least the manuscript of a book so that the back kitchen has an idea of what you’re going to do. There, we had no recipe. She told me to do a list — a list of what you want to do. I did a list of, I don’t know, 80 or 100 recipes. And she did the same thing. And I think maybe three of my recipes made it in the whole thing [laughs]. But I didn’t care. With Julia, we had no recipe, no time frame. We had a bottle of wine. So it was a fun show.

What he cooks today

[I still enjoy cooking], maybe not as much as I used to. You know, your metabolism changes, certainly at my age. When you’re a young chef you tend to add to the plate. To add more garnish. Add this, that. As you get older you have that type of process where you kind of eliminate more and get closer to maybe something more essential.

If I’m left with a beautiful tomato from my garden, a bit of coarse salt, and olive oil, I don’t need more embellishments. So, yes, I cook still, but very simple stuff. I had some clam last night. Pigs feet in the old style with breaded and mustard on top.

I still have a glass of wine, put the bread on the table. It’s less sophisticated than my [late wife Gloria] would have done — she would set up the table by herself with flowers and so forth. But we still set up the table and sit down and enjoy a meal.

‘Dance is my ray of sunshine’: woman who lost legs in earthquake wears prosthetic limbs made by husband to dance in high heels again

Leonard Cohen Isaac Shokal Leonard Cohen’s transformative tour of Israel at the height of the 1973 Yom Kippur War is to be made into a limited TV drama series by Shtisel creator Yehonatan Indursky, Keshet International and Jill Offman’s Sixty-Six Media. Israeli network Keshet 12’s Who By Fire is ...