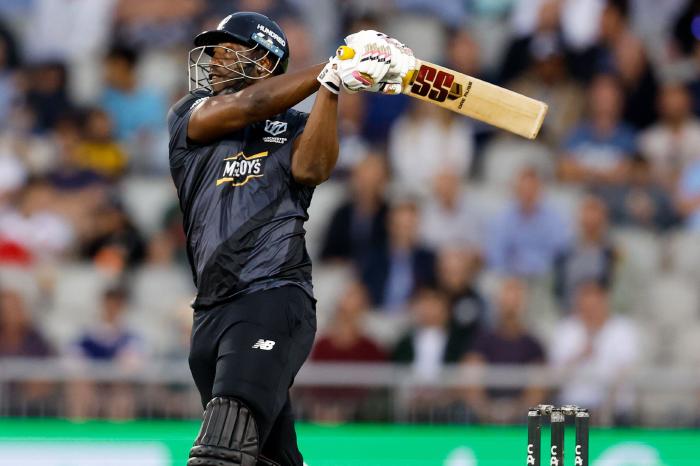 Buttler hammered 68 off 42 balls and Russell flayed an unbeaten 64 off 23 as the Originals exploited the Brave’s under-strength bowling attack to reach an imposing 188 for four.

Paul Walter then took three wickets to help bowl the Brave out for 120, giving the Originals their second win in three days.

Brave have claimed just one win in their opening five matches after a disappointing home defeat which all but ends their chances of defending their title.

Marcus Stoinis did not last long in his final outing for the Brave, sweeping straight to square-leg off Tom Hartley.

Matt Parkinson finished the game by getting Michael Hogan stumped as the Brave were bowled out with 16 balls to spare.

The Originals, with only one victory from their opening four matches, had earlier started slowly against the pace of Garton and Michael Hogan.

But the match burst into life in Dan Moriarty’s first set on his Brave debut. Phil Salt smashed the Surrey spinner for two fours, either side of offering a tough chance to Fuller.

Buttler was not to be outdone, audaciously scooping 41-year-old Hogan for four as the visitors reached an impressive 46 for no wicket at the end of the 25-ball Powerplay. 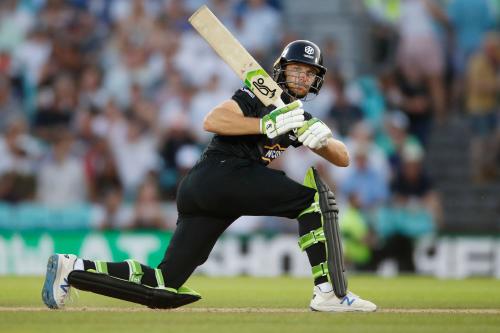 Just as in the women’s game earlier, spin proved harder to attack. Jake Lintott’s first set went for just two and he suckered the dangerous Salt into picking out long-off with the first ball of his second spell.

The leading run-scorer in this year’s IPL reached a 32-ball half-century shortly after Wayne Madsen had been brilliantly run out by Stoinis’ pinpoint throw.

Fellow big-hitter Russell soon joined in the carnage. The all-rounder deposited Fuller for six over mid-wicket before he and Buttler traded maximums off the unfortunate Garton in a barnstorming partnership of 51 off 25 deliveries.

Buttler’s dismissal by Hogan did little to stem the flow of runs for a depleted Brave attack badly missing the services of England stars Jofra Archer, Chris Jordan, Tymal Mills and Craig Overton.

Russell then went into overdrive as the Originals obliterated the previous best team score in the Men’s Hundred at the Ageas Bowl, recording the fourth-highest men’s score in the entire competition.

Garton’s drop off Russell summed up a tricky night in the field for the Brave before the West Indies star clubbed 24 off the final set to boost the Originals up to a total which always looked beyond the home side.

The Post’s Joseph Staszewski brings you around the world of professional wrestling every Tuesday in his weekly column, the Post Match Angle. All Elite Wrestling’s roster construction is making its upcoming television deal that much more important. The company currently has three hours of true weekly television between Dynamite and ...


View more: AEW can’t keep going on like this

Sonic the Hedgehog has seen many redesigns over the years, but one of the most bizarre was Sonic Adventure 2. In most regards he looks the same as he did in the promotional art for the first game, with one big exception – the shoes. As a cross promotional tie-in ...

AN NFL streaker was brutally WIPED OUT by two players last night. The San Francisco 49ers took on the Los Angeles Rams during the Monday Night Football broadcast. Bobby Wagner and Takk McKinley wipe out a streakerCredit: AP The streaker hardly stood a chanceCredit: AP The pitch invader was ...


View more: Watch moment mad streaker ‘gets exactly what he deserves’ as he is WIPED OUT by NFL star

Joe Cordina admits he is "absolutely gutted" to be stripped of his IBF super-featherweight title due to a hand injury.


View more: Joe Cordina 'gutted' after being stripped of IBF title without making a defence

A look at who to target, and who to avoid for Week 5: Buy, buy, buy  Tyler Allgeier RB, Falcons Cordarrelle Patterson will miss at least four games with a knee issue that landed him on the IR. He split work with Caleb Huntley on Sunday, but so far this ...

TRIBUTES have flooded in to a “lovely” gran mauled to death by a pack of out of control dogs. Ann Dunn, 65, died at her home in the Vauxhall area of Liverpool after a horror attack by five American bulldogs on Monday. Ann Dunn (L) died at her home ...

New pictures released of the Duke and Duchess of Sussex yesterday as they attended the opening ceremony of One Young World last month The Duchess of Sussex has criticised the “over sexualised or aggressive” caricatures of Asian women portrayed in films such as Kill Bill and Austin Powers. In ...

UFC legend Michael Bisping reignites his war of words with Conor McGregor... as he claims fame has made the Irishman 'lonely' in latest dig on social media