Everton forward Anthony Gordon admits he was 'not devastated' after a summer transfer window move to Chelsea came to nothing - and is now setting his sights on a place in England's World Cup squad. 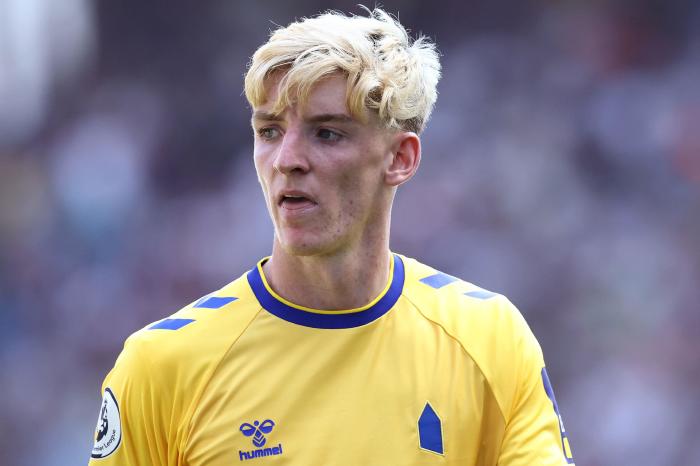 The 21-year-old, who is yet to feature in Gareth Southgate’s senior set-up, helped England Under-21s to a 3-1 friendly win over Germany at Bramall Lane on Tuesday.

The showpiece in Qatar gets under way in November, and Gordon said: “If I didn’t have the ambition to play for England in the World Cup then I would be a bit stupid.

“But I understand the squad is so good at the minute that it’s going to be really tough to get in.

“To get there, I’ll need to score a lot of goals in the next couple of games. I’m ready for that challenge. I’m hopeful.”

Gordon also refused to rule out playing in two international tournaments this season with the under-21s having reached Euro 2023 next summer.

“If I had the option to, I’d never say I’m not playing for England at any level,” he said.

“It’s not my personality. If I got the opportunity to do both, I’d love that – especially because of the work I’ve done here. I’ve played most of the qualifiers so I’d like to see it out.”

Gordon was the subject of strong summer interest from Chelsea, who reportedly had bids of £40million and £45m rejected by Everton.

Gordon, whose club were thought to be asking for around £60m, remains grounded about the situation but reckons the cash being spent on players is wild.

“That’s football nowadays – it’s absolutely crazy,” he said, speaking for the first time about the matter. “Personally, I don’t think any player is worth that amount of money but I’m also not going to talk myself down.

“The money in football, that’s just how it is nowadays. You’re also paying for potential all the time these days. That’s just how football goes.

“I wasn’t too focused on that because I can only control what I can control.

“I think the minute you do that (thinking he is a £60m player), there’s only one way you’re going to go.

“You need to stay humble. You need to focus on today and tomorrow and don’t look too far into the future.

“That’s part and parcel of football. When you’re doing well, there’s always going to be that speculation.

“But because the place (Everton) is so good, it’s not a place where I’m devastated because I have to stay. That’s never been the case. I was never desperate to leave Everton. It was definitely not the case.”

For much of the past few years, British Columbians have gone from seeing doctors in person to through a screen for virtual health care. “There is clearly some benefit to (virtual health care) and that is why we are working to make the best clinical decisions,” B.C. health minister Adrian ...

Samuel Goldwyn Films Writer-director Tarik Saleh’s latest film Cairo Conspiracy follows Adam, the son of a fisherman, who is offered the ultimate privilege to study at the Al-Azhar University in Cairo, the epicenter of power in Sunni Islam. Shortly after his arrival, the university’s highest religious leader, the Grand ...

AP UPDATE: In his first interview since revealing earlier this year that he has stomach cancer, Toby Keith says he is “thinking about getting back into fighting shape.” While acknowledging that his illness is “pretty debilitating, Keith added, “as long as everything stays hunky-dory, then we’ll look at something good ...


View more: Country Music Star Toby Keith Reveals He Is Thinking Of Getting Back As He Battles Stomach Cancer