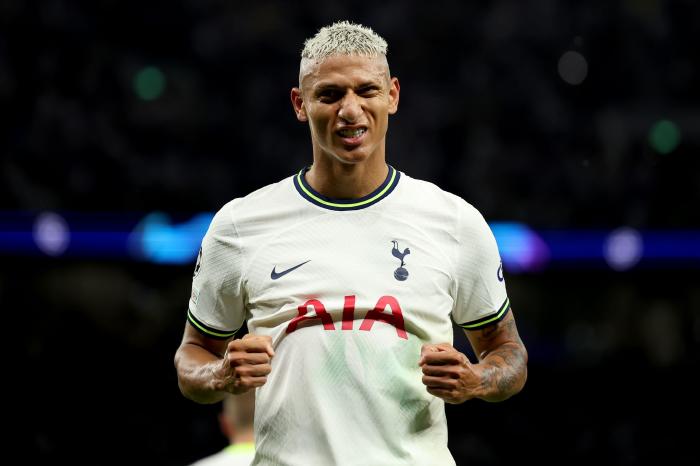 Spurs make the short trip across the capital to Arsenal with last season’s crushing 3-0 win over the Gunners still fresh in the memory of both sides.

It saw Tottenham eventually pip their rivals to the top four and Champions League qualification but both have recruited well during the summer and now have Brazilians leading the line.

Jesus has thrived since his switch from Manchester City and Richarlison, despite his £60million price tag, has quickly made a positive impression with his new club.

“We are talking about a player that has no fear,” Conte said of Richarlison.

“I think he is a player who in every moment, also during the training sessions, shows great commitment but for sure the first thing I see in him is that he has no fear.

“He is not scared about anything. Not about the atmosphere, not about the noise and he is really strong. Into the pitch, also with the opponent, it is difficult to play against him because he has no fear.”

Richarlison will go into this fixture with a slight edge over Jesus, who was surprisingly left out of Brazil’s squad for their recent internationals with Ghana and Tunisia.

While national team boss Tite insisted Jesus remains in contention for a World Cup spot, Spurs forward Richarlison grabbed his opportunity with both hands by scoring a brace against Ghana and netting once in Tuesday’s 5-1 thrashing at the Parc des Princes.

Conte added: “We are talking about two amazing number nines and Tite is lucky because he can count on two fantastic strikers.

“To have players like this, for sure you are ready to face the World Cup with great ambition.

“Then you know very well the competition is a short competition, you have to play every three days and you need players with the same quality. You don’t take risks to drop the quality if you start with Richy, then another game you start with Jesus.

“I think we are talking about two really top players and every manager has to be happy to have this type of problem.”

Jesus has four goals already for Arsenal to highlight how quickly he has settled in London.

It comes as no surprise to Conte, who also talked up the quality of opposite number Mikel Arteta with Arsenal sitting at the Premier League summit after eight matches this season.

“I am not surprised because I know Gabriel Jesus,” the Italian pointed out.

“Sometimes (Raheem) Sterling was on the bench, sometimes Jesus and when you want to fight to win a trophy – Premier League, Champions League or national (team) trophy – the squad has to be strong. And then every single player wants to play every game.

“Jesus wanted to go to Arsenal to play regularly. It was the same for Sterling but we are talking about top, top players that in the past were on the bench. This shows you the quality of Manchester City’s squad and this is the difference between the title contenders and the other teams.”

On Saturday’s clash, Conte added: “I know very well the rivalry exists between these two clubs. Last season happened at the end; we overcame them in the race for Champions League but it doesn’t mean they were less stronger than us.

“Now is another season. I think they want to fight for something important and Arsenal are one of the top six teams in the Premier League.

“They deserve great respect because they are working very well with Arteta for many years. They are backing him in every situation. We have great respect but we are going there to play our game and to try to do our best.”

Lionel Messi celebrates after scoring Argentina’s first goal (Getty Images) A hit, and some hope. If a constant line throughout Lionel Messi’s career has been that it seems like he’s been dropped on the game from another plane, he here descended onto this match to at last elevate it ...

Heavy rain and strong winds are expected in the southern Great Plains this weekend from Texas stretching to Mississippi where it’s already raining, threatening post-Thanksgiving travel plans, according to the National Weather Service. A deep upper level low will continue to bring rain to the region and slowly shift ...


View more: Post-Thanksgiving travel could be hampered by severe weather across country


View more: Dillian Whyte vs Jermaine Franklin LIVE: 'The Body Snatcher' takes on undefeated American at Wembley Arena... in his first return to the ring since defeat to Tyson Fury

Neymar has shared pictures of his visibly swollen ankle on his Instagram page The PSG star was taken off with ten minutes left in Brazil's 2-0 win over Serbia Brazil defender Danilo is also facing a spell out of the side with similar problem Find all of Sportsmail's latest World Cup stories as they happen on this page Click here for the latest World Cup 2022 news, fixtures, live action and results


View more: Neymar shares horrific image of his VERY swollen ankle after hobbling out of Brazil's World Cup clash against Serbia - but the forward stays upbeat about his recovery having been ruled out for the rest of the group stage

Dillian Whyte vs Jermaine Franklin live stream: How to watch fight online and on TV tonight