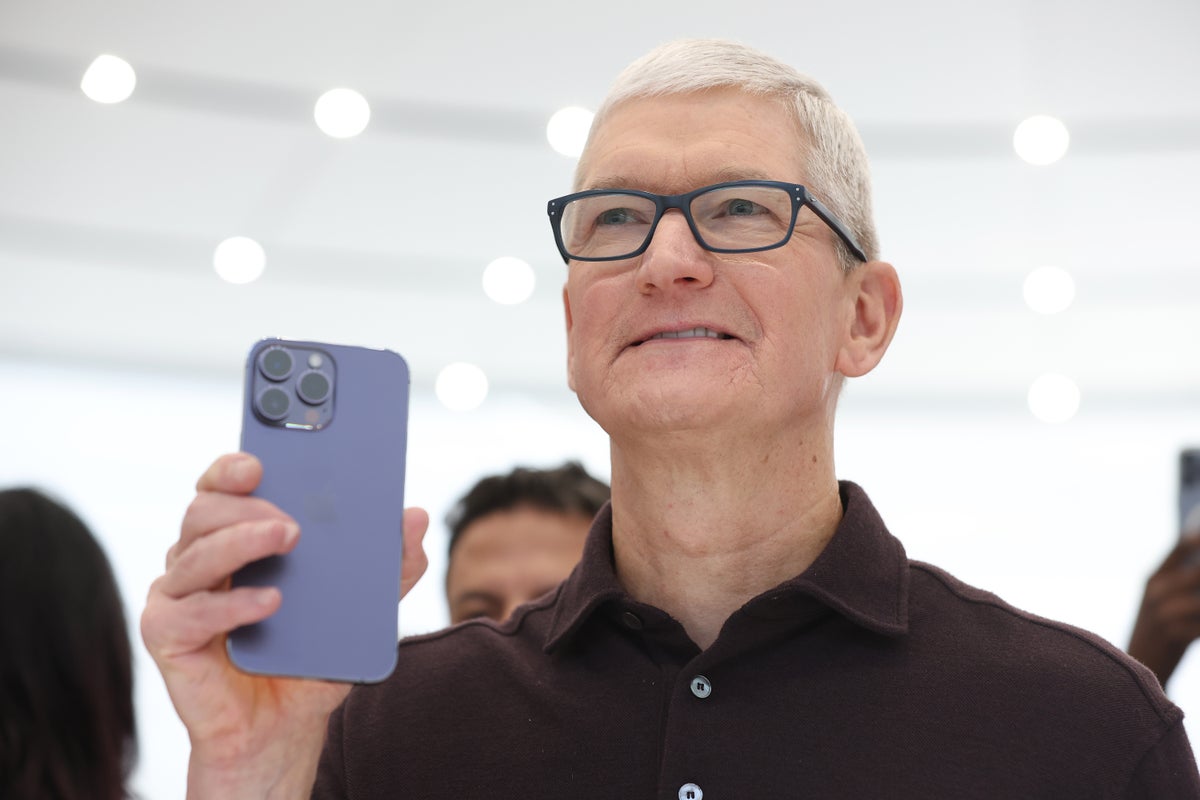 Apple Holds Launch Event For New Products At Its Headquarters

Shares in Apple dropped around 4% in in early trading the US, wiping nearly $100 billion off its value, as investors reacted to news that it had cut back the number of iPhone 14s it planned to make.

The Cupertino-based firm saw its share price drop by 4.05 per cent as reported plans that it had sought to decrease production of its flagship product by 6 million units in the second half of the year appeared to unsettle investors.

The reduction still means the firm will aim to produce 90 million handsets for the period, nearly in line with the a year ago and in line with the company’s original forecast earlier this year.

While fewer iPhone 14 units could be produced this year, demand for more premium versions – the iPhone 14 Pro and iPhone 14 Pro Max – is understood to be stronger than the entry level version, potentially meaning that any dents to profitability could be cushioned.

Moves to cut production, originally reported by Bloomberg, come after the firm recently announced it would be moving some of its production to India and away from China.

Apple’s shares fell as much as 4 per cent in premarket trading to hit $145.89, which would have been a two-month low and equivalent to a $97.6 billion drop in value, but recovered to around a 2.6 per cent fall or $63.4 billion later in the premarket session.

The lurch downwards also weighed on growth-focused peers such as Microsoft, Google-parent Alphabet and Tesla, all falling between 1.5 per cent to 3 per cent in premarket trading.

Once markets opened, Microsoft and Alphabet were broadly flat, but Tesla dropped roughly 1.5 per cent to $278.7 a share.

With inflation hitting multi-decade highs for consumers across the world, companies that rely on discretionary spending power could face challenges in the coming months and years.

Both nations’ central banks have been raising interest rates to counter the pace of inflation, but experts suggest it is too early to tell if the hikes are having any effect.

Furthermore in the UK, the pound’s recent fall against the dollar and euro means that British consumers are essentially paying even more for imported goods and for commodities prices in dollars, such as oil.

Marvel’s Midnight Suns on Mac Marvel’s Midnight Suns is a tactical role-playing game created by Firaxis Games and Marvel Games. The game features comic book heroes from various Marvel Comics franchises, including the Midnight Sons, Avengers, X-Men, and Runaways. The player assumes control of a superhero called “The Hunter” and ...

Evil Dead: The Game is a survival horror game that is based on the film franchise of the same name. In it, players can take control of iconic characters from the Evil Dead universe, such as Ash, Scotty, Lord Arthur, and Kelly Maxwell, and face off against deadly enemies while ...

From to time, we would hear stories of how the Apple Watch Series saved people from a certain situation. Now, someone was saved by Apple’s new Emergency SOS after becoming stranded in Alaska. This would be the first case of someone being saved by the Emergency SOS feature. According to sources, ...


View more: A man was lost & found thanks to the Emergency SOS via satellite on his iPhone 14

In October, through a press release, Apple announced its new iPad 10. While rumors turned out to be accurate, and this tablet finally got a redesign with a USB-C port and the A14 Bionic chip, there was an important concern regarding it: the lack of support for the second-generation Apple ...

Apple Car Keys is one of the most exciting features of the iPhone’s Wallet as it shows how close we are to having our smartphone as our only device. Although the number of cars that currently support Apple’s authentication to unlock vehicles and drive is very limited, the company ...

Apple's AR/VR headset is inching closer to release. Concept: Martin Hajek/Computer Bild Apple has reportedly changed the name of the operating system that will power its upcoming Mixed Reality headset. Previously referred to as “realityOS,” Apple now calls the operating system “xrOS.” This internal change is another sign of ...

No matter if you have an LG OLED TV or an LED model, you just got Apple TV+ for free