PHOENIX — In the first and likely only debate for the Arizona Senate race, Democrat Mark Kelly pitched himself to independent voters as someone who can stand up to President Joe Biden and his own party, particularly on border security.

“When Democrats are wrong, like on the border, I call them out on it, because I'm always going to stick up for Arizona,” Kelly said in his opening remarks on stage at Arizona State University's downtown campus on Thursday. “When the Biden administration refused to increase oil and gas production, I told him he was wrong,” he offered at another point.

The debate between Kelly, his Republican challenger Blake Masters and Libertarian Marc Victor comes just one week before early ballots are sent out in a race that could determine which party has majority control of the Senate next year, as polls show the race is tightening.

“Two years ago, Mark Kelly stood right there, and he promised to be independent,” Masters said in his opening. “But he broke that promise.”

Kelly, who won a special election in 2020 by getting more votes in Arizona than Biden himself, has distanced himself from Democrats' messaging on immigration amid a record number of arrests or detentions of migrants at the southern border.

That includes the Biden administration's decision to lift Title 42, a controversial Trump-era public health order which cut down opportunities for migrants to make legal claims to avoid deportation during the coronavirus pandemic.

“When the president decided he was going to do something dumb on this and change the rules that would create a bigger crisis, you know, I've told him he was wrong,” Kelly said. “So I've pushed back on this administration multiple times, and I've got more money on the ground.”

Kelly called the situation at the U.S.-Mexico border a “mess” and said he supports some physical barriers at the border. 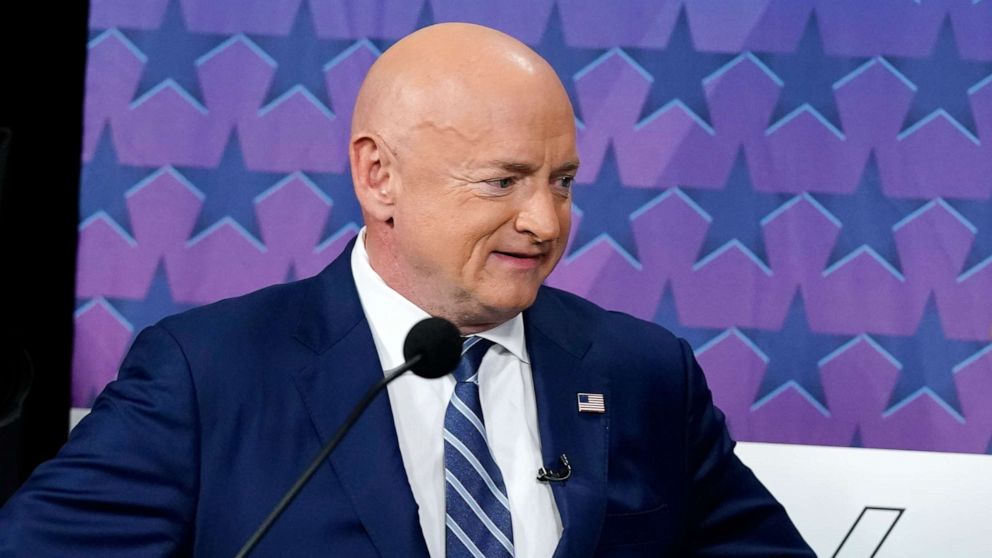 Meanwhile, Masters emphasized Kelly's record of allegiance to Democrats, asking Kelly about a vote against a GOP amendment to the Inflation Reduction Act that would've funded additional 18,000 border patrol agents.

“There are votes that happen in DC that have nothing to do with Border Patrol agents that have might have the title on it and nothing happens,” Kelly offered.

Masters called on Kelly to “respectfully resign” if he has truly done everything he can to secure the border.

During the hour-long debate, the candidates also sparred over the 2020 election, inflation, abortion rights and water security.

Asked if Biden is the legitimately elected president, Masters at first sarcastically offered, “Joe Biden is absolutely the president. I mean, my gosh, have you seen the gas prices lately?” before acknowledging Biden as the “the legitimate president.”

But the political newcomer then pivoted into a conspiracy theory about how the FBI pressured Facebook and other big tech companies to censor information about Hunter Biden's alleged crimes in the weeks before the 2020 election.

Masters, who said in a campaign ad last year, “I think Trump won in 2020,” has softened some stances since beating out four other candidates in the August primary and conceded under questioning from moderator Ted Simons of Arizona PBS that he hasn't seen evidence of voter fraud in the 2020 race.

“I haven't seen evidence of that,” Masters said, breaking from former President Donald Trump, who endorsed him over the summer.

Kelly warned that the “wheels” could “come off our democracy” if candidates like Masters, who he says continue to questioning the integrity of American elections, win this November.

On abortion — a hot-button issue in Arizona after a federal judge last month upheld a 1901 law prohibiting all abortions other than those necessary to save the life of the mother and mandating jail time for providers — the two candidates offered vastly different views.

Kelly answered “of course” when asked if he'd vote to codify Roe v. Wade, and attacked Masters for his past statements describing abortion as “demonic” and “religious sacrifice.”

MORE: How Arizona's abortion ban may affect the midterms

Masters said he's “pro-life as a matter of conscience” with “exceptions” and falsely accused Kelly of supporting abortion “up until the moment of birth.” He said he would support a federal “personhood law” to ban all third-trimester abortions — which Kelly called “code for throwing women into jail” — as well as Sen. Lindsey Graham's federal abortion ban after 15 weeks.

With inflation highest in the country in the Phoenix-metro area, Masters appeared most comfortable when grouping in Kelly with spending in Washington.