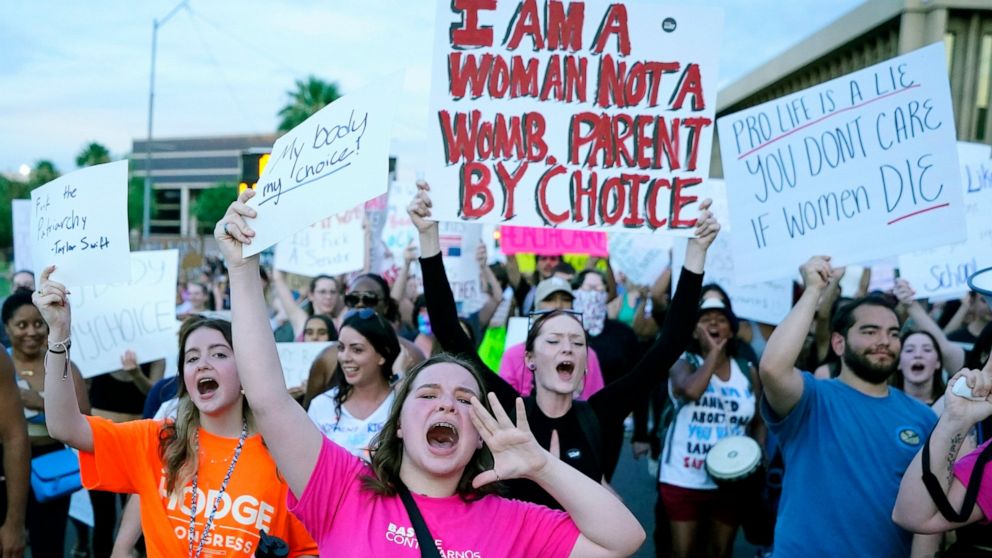 Protesters shout as they join thousands marching around the Arizona Capitol after the Supreme Court decision to overturn the landmark Roe v. Wade abortion decision Friday, June 24, 2022, in Phoenix. The Supreme Court on Friday stripped away women’s constitutional protections for abortion, a fundamental and deeply personal change for Americans’ lives after nearly a half-century under Roe v. Wade. The court’s overturning of the landmark court ruling is likely to lead to abortion bans in roughly half the states. (AP Photo/Ross D. Franklin) The Associated Press

PHOENIX — An Arizona judge will hear arguments Friday on the state's request to allow prosecutors to enforce a near-total ban on abortions under a law that has been blocked for nearly 50 years under a now-overruled U.S. Supreme Court ruling,

Abortion-rights advocates are fighting the request from Republican Attorney General Mark Brnovich to lift an injunction blocking enforcement of the ban on abortions unless the mother's life is in danger. That law was first enacted decades before Arizona was granted statehood in 1912 and blocked following the U.S. Supreme Court's 1973 decision in Roe v. Wade legalizing abortion.

Providers across Arizona stopped abortions after the Supreme Court’s June 24 opinion overturning Roe, saying it was too risky to move ahead with the old ban still on the books and with a 2021 law that grants all rights to pre-born children also in play. A federal judge blocked a major part of that law on July 11, but providers have not restarted abortion services.

Brnovich said two days after the “personhood” law was blocked that he would formally seek to have the 1973 injunction blocking the old abortion ban lifted. He had said shortly after the Supreme Court decision that he believed the ban was enforceable,

Attorneys representing Planned Parenthood and its Arizona affiliate argue that a multitude of laws restricting and regulating abortion enacted by the state Legislature since Roe was decided would be rendered meaningless if the court allowed the old law to be enforced.

They note that just this year, the Legislature passed a law signed by Republican Gov. Doug Ducey that criminalizes performing abortions after 15 weeks of pregnancy. Ducey contends that the new law he signed takes precedence over the pre-statehood law.

Planned Parenthood attorneys are urging the judge in Tucson, where the case originated in 1971, to “harmonize” the old and newer laws by allowing existing restrictions and the 15-week ban to be enforced against doctors, while non-doctors would be subject to the total ban.

Not doing so, Planned Parenthood attorneys wrote in court papers, would “nullify in one fell swoop dozens of duly enacted laws, which have been passed more recently and which deal more specifically with the subject matter, thereby actually preventing the State from carrying out all its duly enacted laws.”

Lawyers with the attorney general's office say that argument quickly falls apart. That's because “in anticipation that the U.S. Supreme Court could overrule Roe, the Legislature has repeatedly preserved Arizona’s statutory prohibition on performing abortions except to save the life of the mother.”

They noted that the 15-week ban that Ducey signed expressly said it did not repeal the old law.

The case originated in 1971 when the Tucson affiliate of Planned Parenthood, several doctors and a woman who wanted an abortion sued to overturn the law. A Pima County trial judge ruled the next year that a fetus does not have constitutionally protected rights and that the law banning abortion also violated the doctors’ rights to practice medicine as they saw fit.

The Arizona Court of Appeals overturned that ruling, rejecting wholesale the lower court’s reasoning that the abortion ban was unconstitutional and saying it could be enforced.

“Appellees’ complaints against the abortion statutes are peculiarly within the field occupied by the Legislature and any problem concerning abortion should be solved by that body,” the appeals court ruling said. “We can only reiterate that we are not a super-legislature.”

Less than three weeks later, the U.S. Supreme Court ruled in Roe, and the appeals court reversed its earlier judgment. The law was then permanently blocked.

At a roundtable with U.S. Health and Human Services Secretary Xavier Becerra in Phoenix on Thursday, Planned Parenthood Arizona President and CEP Brittany Fonteno said the group would again provide abortions if the judge rules in their favor.

‘What we’re really looking for is that clarity, because we have to think about our providers,” Fonteno said.

Richarlison: Antonio Conte convinced me to snub Arsenal and Chelsea for Spurs

Edu Gaspar has overseen a transfer strategy overhaul at Arsenal (Photo by Stuart MacFarlane/Arsenal FC via Getty Images) Here is your Arsenal morning digest on Saturday, September 24. Edu in hotly contested transfer race According to Fichajes, via Caughtoffside, the Gunners face competition from Barcelona and Real Madrid amongst ...

NFL owners’ attitudes harden toward Commanders’ Daniel Snyder Sentiments among NFL team owners regarding Daniel Snyder’s ownership of the Washington Commanders have shifted significantly, as they await the findings of both a congressional investigation and a league-commissioned probe into allegations of misconduct by him and his team. Multiple owners ...

In this photo taken by an individual not employed by the Associated Press and obtained by the AP outside Iran, protesters chant slogans during a protest over the death of a woman who was detained by the morality police, in downtown Tehran, Iran, Wednesday, Sept. 21, 2022. (AP Photo) ...

Police investigate shooting at home in Machesney Park MACHESNEY PARK, Ill. (WTVO) – Police have put up crime scene tape around a home in the 5400 block of Autumnash Lane in Machesney Park, where a shooting took place. Police were called to the scene around 3:15 p.m. The Winnebago ...

The Bizarre Item In King Tut's Tomb That Baffled Scientists

A letter to a billionaire sparked a W.Va. economic windfall

Los Angeles anchorman is out of a job following on-air, emotional farewell to colleague