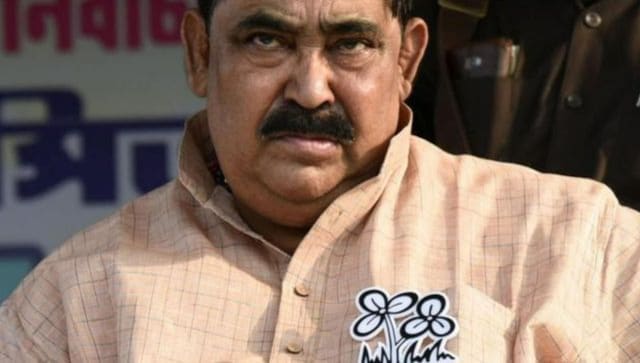 Kolkata: Arrested TMC leader Anubrata Mondal on Thursday denied the allegation that his daughter Sukanya Mondal was appointed to a primary school without having cleared Teachers’ Eligibility Test and claimed that she has passed the exam and has a document to prove it.

His comment came after the Calcutta High Court had on 17 August directed Mondal’s daughter to appear before it on Thursday in connection with the allegation that she and five others were appointed in primary schools without having passed the TET. “She has passed the test and has a certificate to prove it. I am not well,” said the TMC leader while he was taken to a hospital for a medical check-up.

Mondal, the party’s Birbhum district president, was arrested by the CBI last week in a cattle smuggling case. Sukanya is likely to appear before the high court as she left her Bolpur residence in the district earlier in the day. The petitioner has alleged that some people closely related to Anubrata Mondal, who is also the chairman of West Bengal Rural Development Authority, have been given jobs as teachers, including Sukanya, who never visited Kalikapur Primary School in Birbhum, where she was employed.

Meanwhile, the Calcutta High Court ordered Sukanya Mandal to produce her TET certificate before the court. It also asked for her marksheet in this regard for all further hearings to take place. The next date for hearing has been fixed for 1 September, ANI reported.

In the affidavit, the petitioner claimed that the school attendance register was sent to Sukanya’s residence for her signature.

Justice Abhijit Gangopadhyay directed six persons named in the affidavit to appear personally on Thursday before the court with their TET certificate and their appointment letter.

“If anybody fails to appear, as has been directed above, the court will not hesitate to take harsh steps against them,” he directed on Wednesday.

Justice Gangopadhyay had earlier ordered CBI investigation in a number of cases of alleged irregularities in the appointment of teaching and non-teaching staff in West Bengal government-sponsored and -aided schools in the state.

The Saskatoon Police Service said it is on the 300 block of Pendygrasse Road at a scene of a person barricaded inside an apartment complex. Officers said the incident started around 12:30 a.m. and is ongoing. There are no traffic restrictions in place, but police are asking people to stay ...

20th Century Studios/Hulu/YouTube Contains spoilers for “Hellraiser” (2022). In 2022, four years after the last film in the franchise, “Hellraiser” got a new lease on life with a reimagined look at the mythology through the eyes of filmmaker David Bruckner, fresh off his horror triumph “The Night House.” With ...

With over 75% of UK mothers working, many face regular challenges in their efforts to raise a family whilst making a meaningful contribution in the workplace.

20th Century Studios/Hulu David Bruckner’s “Hellraiser” has been billed as a reimagining of Clive Barker’s seminal horror film, and it is in many ways. For a start, Jamie Clayton is the new Pinhead and she brings a beguiling and ethereal quality to the character that differs from Doug Bradley’s bold ...


View more: What Only Longtime Hellraiser Fans Will Recognize About Riley From Hulu's Reboot

Beyoncé just wore the diamond corset dress of your dreams Party season is just around the corner, folks, and celebrities are already offering us incred 'going out' fashion inspo. From Simone Ashley's Studio 54-esque sequin mini to Khloé Kardashian's deliciously extra glitter boots, sparkly details are shaping up to ...

In 'TÁR,' Cate Blanchett delivers a tour de force as a musical genius corrupted by power

ANALYSIS: Time for some Jets games that mean something

Texas-OU Weekend Has Arrived in Dallas

Dodgers Dugout: Is it better to play the Mets or Padres?

Paul Heaton and Jacqui Abbott tour 2022: music duo praised for £30 ticket cap - dates and how to get tickets

The first hints of Gisele Bündchen-Tom Brady trouble go way back: ‘She was dead serious’

Cleaner dies after lorry reverses into him in Hougang; workplace deaths surpass 2021 figure

A splendiferous home! Grade II-listed thatched cottage where Roald Dahl's mother and sister escape WW2 bombings and was mentioned in his autobiography Going Solo goes on the market for £599,950

Where Else You've Seen The Conners' Sara Gilbert On TV

Kadarius Toney will miss London clash with yet another hamstring injury

12 Best Shows Like The Serpent Queen You Should Check Out

Did You Get A Chicago Parking Ticket Recently? You're Not Alone. Ticketing is Up 25.7%

Pinhead's Biggest Differences Between Hulu's Hellraiser And The 1987 Original Film