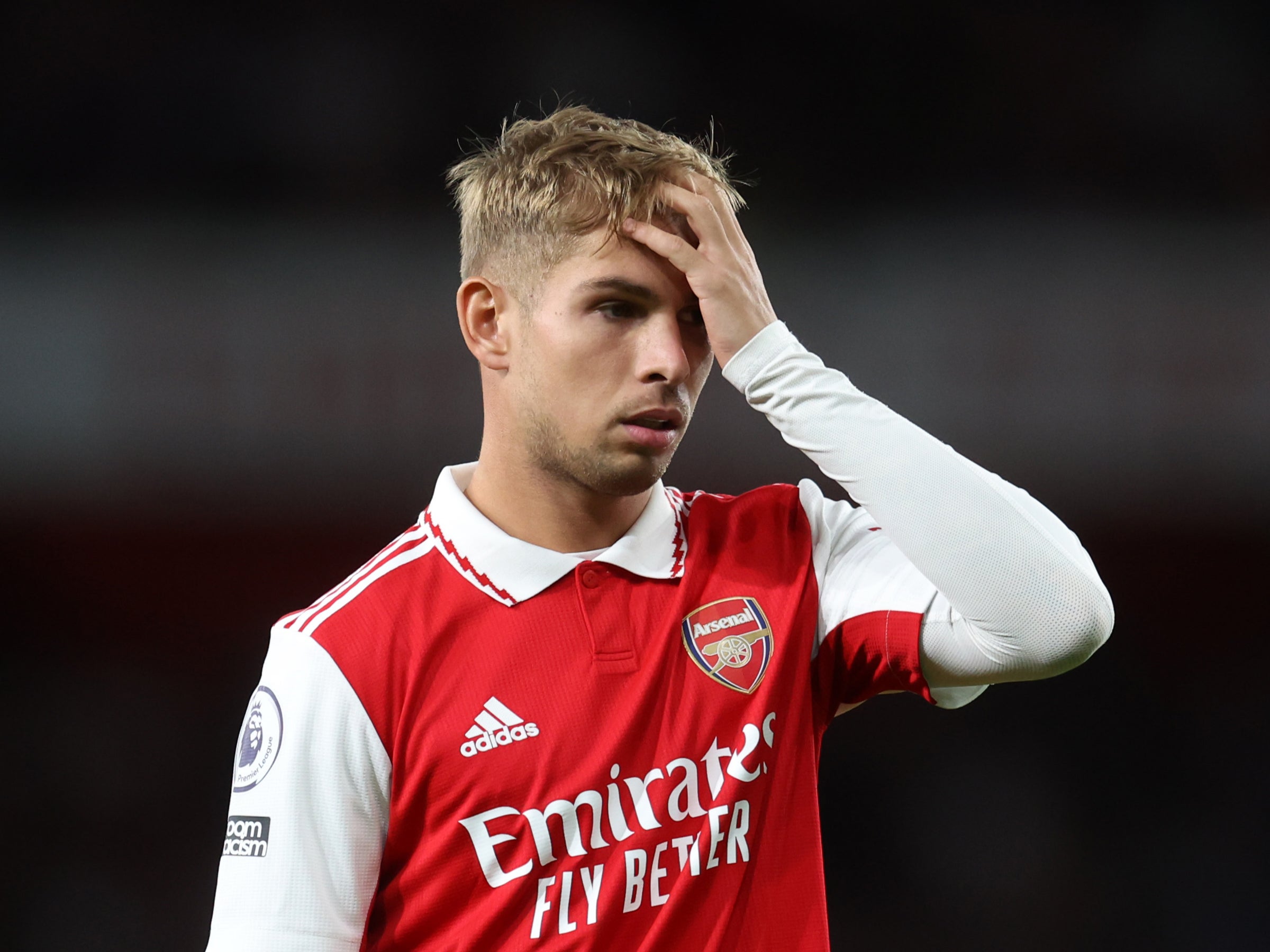 The 22-year-old has managed no more than 16 minutes of game time in an individual match so far this season and has only stepped onto the pitch four times. In Arsenal’s other fixtures so far this term, the England international has either been an unused substitute or been left out of Mikel Arteta’s squad altogether.

The Premier League leaders have now revealed that Smith Rowe has undergone groin surgery to alleviate the ‘discomfort’ that has limited his appearances.

A statement released by Arsenal on Thursday (29 September) read: “In recent months, Emile Smith Rowe has been experiencing discomfort in his groin, which has limited his training and match appearances.

“Following a significant setback at our Premier League match against Manchester United at Old Trafford on September 4, and after further specialist consultations and discussions with our medical team, Emile underwent surgery to repair a damaged tendon in his groin.

“This successful surgery took place in London in the past few days and Emile’s rehabilitation programme is already underway. We are hopeful that Emile will return to full training in December. Everyone at the club will now be supporting and working hard with Emile to get him back on the pitch as soon as possible.”

Arsenal last played on 18 September, beating Brentford 3-0 away from home in the Premier League. Smith Rowe was absent from the Gunners’ squad.

Arteta’s side are top of table with 18 points, one ahead of defending champions Manchester City, while Spurs are third – also on 17 points.

Is Ghana vs Uruguay on TV today? Kick-off time, channel and how to watch World Cup fixture

Qatari TV hosts MOCK Germany's World Cup human rights protest, waving goodbye to the knocked-out nation with their hands over their mouths before they fly home

Rafael van der Vaart takes ANOTHER swipe at Harry Maguire by describing Niklas Sule as Germany's version of the England and Man United centre-back... while insisting he is 'NOT world class' after their World Cup exit

Now Germany's WAGs take the brunt of their national press' inquests, as the country's top newspaper asks 'what is wrong' with their lack of partying - while 'England and Wales' wives drink Qatar half-dry' - as they fly home with their 'football dwarves'

Cristiano Ronaldo STARTS for Portugal in their final Group H clash against South Korea after missing training this week, as Fernando Santos rotates his side with just one point needed to seal top-spot

Cristiano Ronaldo is starting for Portugal in their clash against South Korea He missed training in the build-up to Portugal's final group stage game Portugal need only a point to secure their place as Group H winners today Click here to follow Sportsmail's live blog for Portugal vs South Korea You can also keep up-to-date with all the latest World Cup news here Click here for the latest World Cup 2022 news, fixtures, live action and results


View more: Cristiano Ronaldo STARTS for Portugal in their final Group H clash against South Korea after missing training this week, as Fernando Santos rotates his side with just one point needed to seal top-spot

The World Cup has delivered all sorts of drama once again in 2022. There have been plenty of shocks, with Saudi Arabia’s triumph over Argentina being the highlight. Some massive sides have already departed the competition at the group stages, including Belgium and Germany. The World Cup has not disappointed ...


View more: Now is a good time to talk about the major changes FIFA are making to World Cup format in 2026

Australia is in a rental crisis not seen since the Great Depression of the 1930sResearch shows the national rental vacancy rate is at a record low 0.9 per centRenting is less affordable in every capital city in 2022 compared with last yearFamilies have been forced to live in tents, caravans and motels or share houses


View more: Why Australia's rental crisis is the worst since the Great Depression 93 years ago as it becomes 'normal' for families to sleep in cars and tents - and it's going to get WORSE next year

Juventus sporting director Federico Cherubini accuses his predecessor Fabio Paratici of putting 'EVERYTHING at risk' after wasting £600M... and claims the signing of Cristiano Ronaldo from the Paul Pogba sale started a 'vicious cycle' at the club


View more: Juventus sporting director Federico Cherubini accuses his predecessor Fabio Paratici of putting 'EVERYTHING at risk' after wasting £600M... and claims the signing of Cristiano Ronaldo from the Paul Pogba sale started a 'vicious cycle' at the club

Video: Jonnie Irwin shares an insight into his stunning family trip to Marrakesh after revealing that A Place In The Sun couldn't get travel insurance to keep him on the show following his terminal cancer diagnosis


View more: Video: Jonnie Irwin shares an insight into his stunning family trip to Marrakesh after revealing that A Place In The Sun couldn't get travel insurance to keep him on the show following his terminal cancer diagnosis

Kieron Dyer claims members of Chelsea squad have told him they don't rate Graham Potter and preferred playing for Thomas Tuchel, believing the former boss is 'on a different planet'


View more: Kieron Dyer claims members of Chelsea squad have told him they don't rate Graham Potter and preferred playing for Thomas Tuchel, believing the former boss is 'on a different planet'

Vegan makeup, BURLAP decor... and recycled outfits for the royal hosts: Inside Prince William and Kate's VERY eco-friendly plans for glitzy Earthshot Prize gala - as they share behind-the-scenes glimpse at their prep for the star-studded event

The Prince of Wales will host his second inaugural Earthshot Prize ceremony in Boston tonightHis glitzy, star-studded event will be attended by the likes of Billie Eilish, Annie Lennox, and Rami Malek The Earthshot Prize is meant to highlight some of the leading climate change innovations and solutions In keeping with that theme, William and Kate have implemented several eco-friendly steps in their planning of the event - from using largely vegan makeup to recycling the 'green carpet' at the end of the nightAhead of the event, the couple shared a series of black-and-white photos from their preparations for the galaIt marks the final engagement in the Prince and Princess of Wales' three-day US tour - which has been marred by controversy amid the Buckingham Palace race row and Harry and Meghan's Netflix trailer release


View more: Vegan makeup, BURLAP decor... and recycled outfits for the royal hosts: Inside Prince William and Kate's VERY eco-friendly plans for glitzy Earthshot Prize gala - as they share behind-the-scenes glimpse at their prep for the star-studded event

Javid: Tory big beast walking away with a wealth of experience

What is Strep A infection?

Starmer vows Labour would bring change in Scotland without indyref2

Who is in Harry and Meghan's inner circle? The Sussexes' close friends who may speak out in the couple's explosive Netflix docuseries

Wales: Family rescued after being trapped by high tide

Video: Gwen Stefani and Blake Shelton lovingly serenade each other during duet of their 2017 Christmas song

Sophie's symptoms were dismissed by doctors as period pain. Now, the super-fit weightlifter, 28, has been given months to live after shock diagnosis

'He plays for HIMSELF': Tony Adams claims Kalidou Koulibaly will be Senegal's downfall in their last-16 clash with England and that Harry Kane and Co will take full advantage, saying: 'We've got too much for them'