Arsenal and Tottenham are separated by just one point at the top of the Premier League table as they go head-to-head in the first north London derby of the season this afternoon. Mikel Arteta’s Gunners sit top of the league with 18 points whilst Antonio Conte’s Spurs are two places back in third.

In their last match before the international break Tottenham despatched Leicester 6-2 with Son Heung-min finally hitting form with a second half hat-trick from off the bench to seal the victory for Spurs. Arsenal are also in fine touch and they ended the opening spell of the season with a 3-0 win away at Brentford.

Today’s encounter is set to be a furious clash between two teams on the top of their game. Arsenal have only lost once in their league campaign so far – a 3-1 defeat to Manchester United at Old Trafford – whilst Tottenham are unbeaten with five wins and two draws from their first seven fixtures. Will the Gunners end Spurs’ unbeaten run and remain top of the Premier League table?

Follow all the action from the Emirates Stadium as Arsenal host Tottenham in the north London derby:

Tottenham manager Antonio Conte has backed Richarlison to relish this weekend’s north London derby, where he will go up against countryman Gabriel Jesus.

Spurs make the short trip across the capital to Arsenal with last season’s crushing 3-0 win over the Gunners still fresh in the memory of both sides.

It saw Tottenham eventually pip their rivals to the top four and Champions League qualification but both have recruited well during the summer and now have Brazilians leading the line. 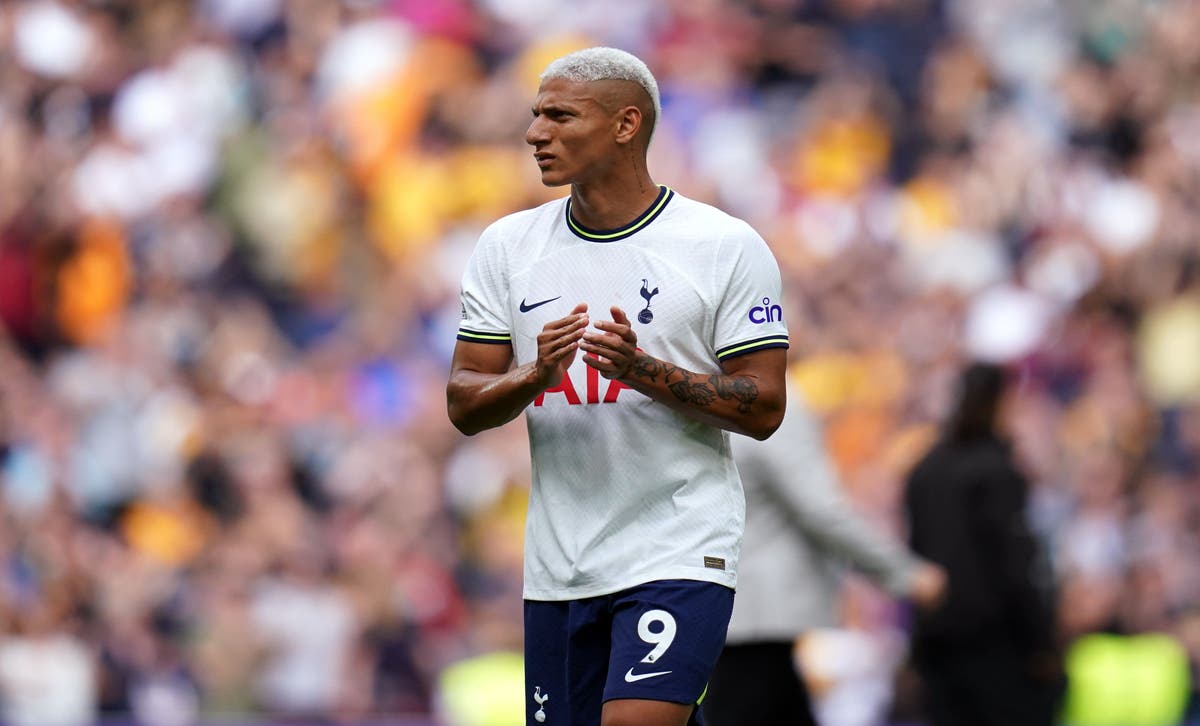 Video: Olivia Rodrigo CONFIRMS she will release new music in 2023 after debut album Sour scored her three Grammy Awards: 'I am so excited'

Emotional Chrissie Swan, Sam Pang and Jonathan Brown sign off their last breakfast radio show after it was cancelled by enjoying some Crown Lagers… but she sips on a Coke after going sober

EXCLUSIVE: How Brittany Higgins skipped town during the trial of Bruce Lehrmann for a beach getaway - and the behind-the-scenes moments from the trial we couldn't tell you about until now

Video: Kim Kardashian shows off her glorious Christmas tree at her Calabasas mansion as she continues tradition of waking up her children to the sounds of holiday music

Olivia Rodrigo CONFIRMS she will release new music in 2023 after debut album Sour scored her three Grammy Awards: 'I am so excited'

Video: A toast to everyone getting along? Anna Wintour joins the Bidens, Republicans, Democrats and celebs for White House state dinner with Macron - as GOP leader Kevin McCarthy brushes off question about dining with investigation target Hunter


View more: Video: A toast to everyone getting along? Anna Wintour joins the Bidens, Republicans, Democrats and celebs for White House state dinner with Macron - as GOP leader Kevin McCarthy brushes off question about dining with investigation target Hunter

Pylons have been removed (Image: Archant) It was interesting to read in Wednesday’s Dorset Echo that the scheme to remove 22 pylons in the Dorset Area of Outstanding Natural Beauty (AONB) was the first of its kind in the world. There is a simple reason why it will not ...

Sven Botman has already proven why Newcastle United were right to revive their transfer interest despite a failed January approach. That is the view of Warren Barton, who believes the promising centre-back is a future Magpies captain who can become ‘one of the best’ Premier League players in the next ...


View more: Newcastle rewarded for revisiting £35m transfer target who can become 'one of the best'

Investigation continue after broad daylight stabbing on Glasgow street (Image: Photos by Colin Mearns) COPS are continuing investigations after a man was stabbed in Glasgow. We previously reported that Bain Street had been locked down as forensics swept the area after a man was attacked. The 45-year-old was rushed to hospital to ...

Mac Jones appeared to yell ‘throw the [expletive] ball’ on the Patriots sideline as they lost to the Bills Mac Jones did not have a good night to kick off Week 13 of the 2022 NFL season. He threw for only 195 yards despite 36 attempts in his third ...


View more: Mac Jones appeared to yell 'throw the [expletive] ball' on the Patriots sideline as they lost to the Bills

Edinburgh reacts to Nicola Sturgeon spending over £260,000 on Supreme Court cases for indyref2

joules next retail High street retailer Next has secured a last minute deal to buy Joules, after gazumping the South African group behind Hobbs and Whistles to acquire the business out of bankruptcy. The FTSE 100 company will take on 100 Joules stores as well as its head office ...


View more: Joules to shut 19 stores after Next snaps up brand in last-minute deal

At the age of just 34, Stephen Flynn is a natural born leader – Roger Harris Stephen Flynn is the clear favourite to succeed Ian Blackford as the SNP’s Westminster leader next Tuesday and could be crowned without a contest. It would mark the culmination of a remarkably fast ...

EXCLUSIVE: Candice Warner reveals what she really thinks about husband David retiring from Tests - and what shocked her most about the Aussie cricket team when she first met them

Inside the night the Socceroos stunned Argentina: How one of the best free kicks you'll ever see gave Graham Arnold and his teammates a victory for the ages against the football giants

Car park to be swallowed by homes under Nailsea regeneration plan

The gang's all here! Carrie Bickmore posts rare sweet family picture with her partner Chris Walker and their three children from her last day on The Project

Seeking 'leader of the rat pack': New York City posts job listing for Rat Czar that pays up to $170,000 - qualifications include 'swashbuckling attitude, crafty humor, and general aura of badassery,' as well as proficiency with powerpoint

The signs that can lead to infidelity, according to science

Video: Moment notorious tiny alleged terrorist who planned attacks on Sydney and Melbourne lands in Australia where he faces life in prison

Video: EXCLUSIVE: Little boy born with an extra toe on his foot FINALLY gets it removed - but was upset when he had to say goodbye to the extra limb he named 'Peggy'

'Stunning' British seaside town is perfect for staycations in 2023

Man suspected of stabbing his daughters - aged four and six - wife, female relative before killing himself: All five found dead inside million dollar home in Chicago suburb in 'domestic-related incident'

Mother of four hailed as a 'hero' after she pushed her daughter, 4, out of the way of an oncoming car before she was struck - now she faces a battle to save her leg

Analysis-Soccer-German exit not as shocking as it looks

Road closures in Dorset: nine to look out for

EXCLUSIVE: Little boy born with an extra toe on his foot FINALLY gets it removed - but was upset when he had to say goodbye to the extra limb he named 'Peggy'

PICTURED: Mom, 38, and her eight-year-old son who were killed in their sleep when tornado ripped through Alabama, causing large pine tree to fall on their home

Video: Why I gave up my job and sold my house to buy a Tesla: Melbourne man whose electric car videos caught the attention of Elon Musk has no regrets

Kim Kardashian and the art of distraction: Just divorced reality star almost spills out of her TINY bandeau top at Miami festival as she shakes off Kanye West drama and Balenciaga scandal

Video: Hardworking family who've paid taxes in Australia for more than 10 years are still fighting to avoid deportation - despite doing everything right to try and stay

Ready to party! Today Show host Allison Langdon beams as she heads from her final show to the dry-cleaners to pick up a fresh dress after breaking down in tears during her emotional send-off

'Could cause damage!' Drivers urged to top up 'vital' car fluid ahead of winter

The Who's Roger Daltrey's quiet life in serene Sussex village - house prices are £367,000

Why I gave up my job and sold my house to buy a Tesla: Melbourne man whose electric car videos caught the attention of Elon Musk has no regrets

Neighbours unsure on plans for hundreds of homes at Boots headquarters