Taichi Kho said he felt “a sense of belonging” as his three-week stint on the Asian Tour comes to an end at the International Series Korea.

The Hong Kong amateur went into this week’s tournament after two strong showings in previous events, finishing in a tie for 11th at the Mandiri Indonesia Open, and tied for 63rd at last week’s International Series Singapore.

For Kho, the past three weeks have also boosted his confidence, and while he believed his result in Singapore did not reflect how well he played, the more he competed the more he realised he could cut it “at the very top of the leader board”.

The 22-year-old posted a two-over-par 73 in the first round on Jeju Island on Thursday to sit 10 shots off the lead, as Pavit Tangkamolprasert led the way with an eight-under-par 63 at Lotte Skyhill Country Club. 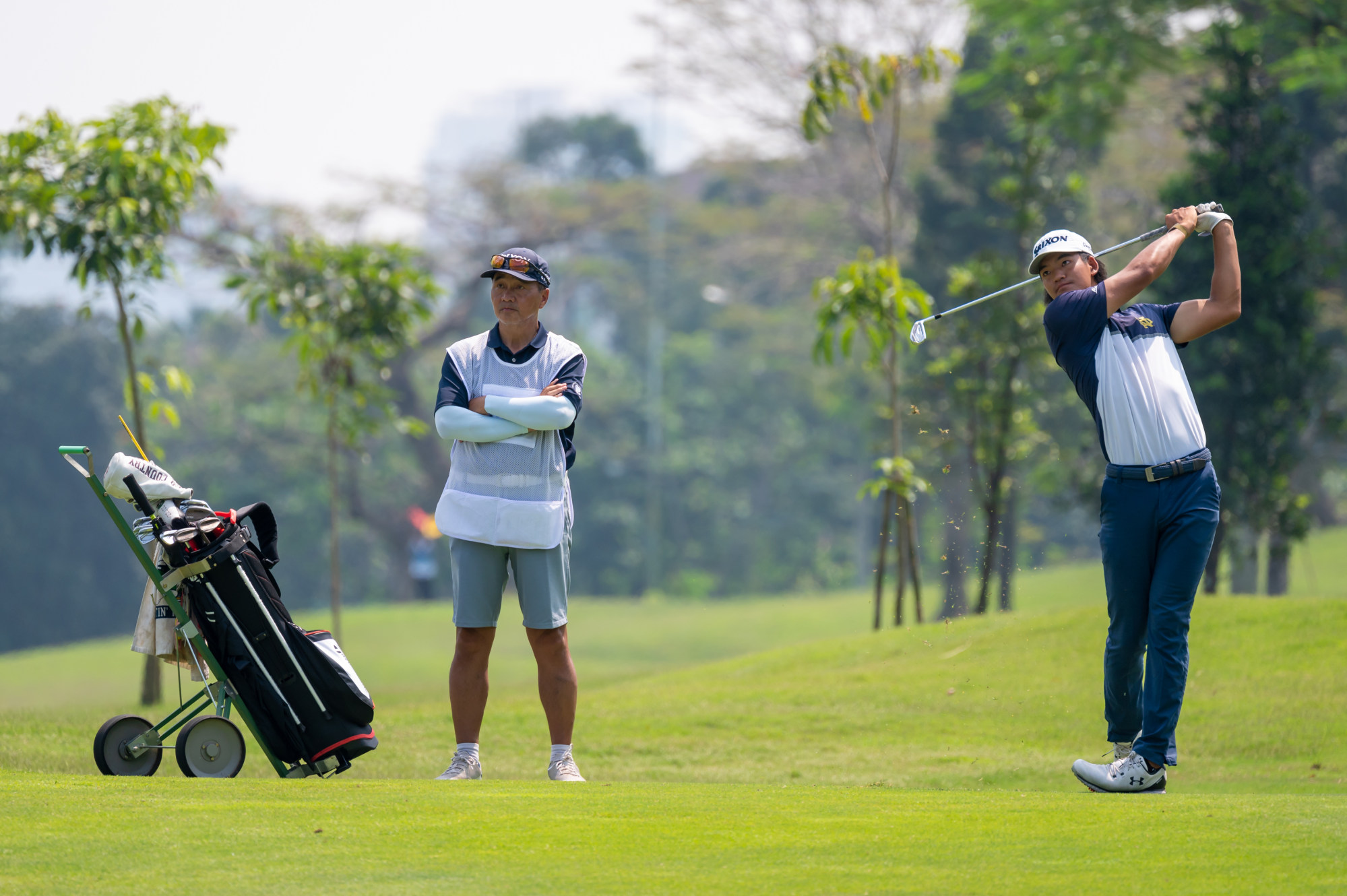 Taichi Kho has said that he would be keen to play in the Asian Tour Q-school. Photo: Asian Tour

The brief time spent on tour has given Kho a glimpse into the realities of life as a professional golfer, and he said it only reinforced his desire to join their ranks.

“I definitely feel a sense of belonging out here, it’s really nice to get to know quite a few of the guys and get into a routine of when to do practice rounds, when to do my drills, and how to get mentally ready to compete,” he said.

“I just feel really good about getting into the rhythm of it and it just reinforces that I want to do this as a career.”

For many, the Asian Tour could well be the place to be in the next couple of years, as the money pumped into the International Series by LIV Golf raises the stakes and attracts players from other tours.

Scott Hend, who has represented Australia at the Olympics and is a veteran of several tours around the world, said in a tweet that the regional tour “might even get stronger than the DP World Tour”.

While Hend acknowledged people may laugh at that suggestion, he pointed to the affordability of the Asian Tour’s Q-school and the “massive carrot” at the end.

And in reference to the civil war breaking out in the game between the PGA Tour and the Saudi-backed LIV Golf Invitational events, Hend said the Asian Tour also benefited from not being “a lapdog” for the US-based circuit.

“I see [Asian Tour] Q-school being very busy in January,” he tweeted.

Hend’s belief in the future of the tour appears to be mirrored by other golfers, and Kho said there was a lot of excitement among the players on the potential it had.

“People who are playing on other tours in Asia or Europe or wherever, they used to skip around, but for the next few years they are saying their focus is solely on the Asian Tour because of the opportunities,” Kho said.

“So, it’s clearly finding its time and I’m really glad to be a part of the start of that.”

The Hongkonger, who has a year left at the University of Notre Dame, said if the timing worked out he would “love to do the Asian Tour Q-school”, but acknowledged the Korn Ferry Tour, which acts as a feeder system for the PGA Tour, was also a possibility.

“How college golf is working out with the rankings, I think it’s the top 15 get some form of status on the Korn Ferry,” Kho said. “Going on to next year there are plenty of opportunities and this week is a good opportunity as well, so I’m just trying to make the most of what I’ve got.”

Mark Williams was only just getting his bearings after the last-minute call that brought him to the Hong Kong Masters, but he started with a century break and gave Neil Robertson a stern test before the Australian kept on course for a repeat title win. In a whirlwind 36 ...

Police fired rubber bullets and tear gas at Gimnasia y Esgrima fans who tried to enter an already full stadium The incident comes a week after 131 people died when tear gas was used on football fans in Indonesia Security minister gave no details about how the person died, other than being caused by heart failure


View more: At least one person dies as police fire tear gas at fans trying to push into Argentine football match - less than a week after 131 died in similar crush in Indonesia

George Russell and Lewis Hamilton topped the FP2 timesheets on a saturated Suzuka track ahead of Sunday's Japanese Grand Prix.

The wait for Hong Kong’s men to succeed at the World Team Table Tennis Championships will go on after they were knocked out at the quarter-final stages by South Korea on Friday. A day after the women’s team crashed out of the tournament at the same stage at the ...

End product has been in short supply No Premier League goals since August Reds not playing to his strengths WHAT HAPPENED? That return may not be overly concerning to most, but Salah has set remarkable standards across five productive years at Anfield. He is a three-time Premier League Golden ...

Could a Beckham be returning to the Premier League? David's son Romeo 'trains with Brentford's B-team' as the 20-year-old - who is on the books of his dad's MLS franchise Inter Miami - looks to kickstart his fledgling football career

Romeo Beckham is under contract at Inter Miami - co-owned by his fatherHowever, the right-sided midfielder is looking to advance his football careerHe returned to the sport in 2020 after more than five years awaySince then he has impressed and looks to be taking his game to the next levelMade his first appearance for Inter Miami during a Barcelona friendly this year


View more: Could a Beckham be returning to the Premier League? David's son Romeo 'trains with Brentford's B-team' as the 20-year-old - who is on the books of his dad's MLS franchise Inter Miami - looks to kickstart his fledgling football career

'It leaves me truly devastated': Conor Benn's trainer Tony Sims breaks his silence on Chris Eubank Jr fight postponement as he vows to stand by fighter and 'get to the bottom of this'

The highly anticipated fight between Chris Eubank Jr and Conor Benn is off Sportsmail broke the news on Wednesday that Benn had failed a drugs test The British Boxing Board of Control have prohibited the fight from taking place  Despite various attempts, the fight was confirmed to be off on Thursday


View more: 'It leaves me truly devastated': Conor Benn's trainer Tony Sims breaks his silence on Chris Eubank Jr fight postponement as he vows to stand by fighter and 'get to the bottom of this'

Cycling: Valverde, Nibali will ride into the sunset at Il Lombardia

Football: A classic clash that could be decided by teen talents Bellingham and Musiala

Shohei Ohtani has had the greatest baseball season of all time, but Aaron Judge’s Yankee ties might decide MVP argument

Lucas Browne told he is TOO OLD to fight at 43 as BBBC refuse to sanction bout against Brit Daniel Dubois - while Tyson Fury has backed the Aussie boxer, saying 'let the man fight'

Bodo/Glimt's players are forced to WALK to the Emirates ahead of their 3-0 defeat by Arsenal... as their team bus gets STUCK in the 'narrow back streets' of north London

'We made it a bit scary for ourselves, but overall I thought we deserved the victory': David Moyes feels his West Ham side are getting back to their best after a 1-0 will over Anderlecht

'The subs really had an impact today and that is really good': Erik ten Hag lauds Marcus Rashford and Anthony Martial after their goals from the bench rescued Man United, but admits his side has 'to take responsibility' for mistakes

SAMI MOKBEL: It was easy for England not to take the knee for recent Nations League games because that's what they're used to in the Premier League... but they can still make a powerful gesture at the World Cup in Qatar

Jess Fishlock: Winning goal was a moment dreams are made of