Australia to protect Barrier Reef by banning coal mine

Australia to protect Barrier Reef by banning coal mine 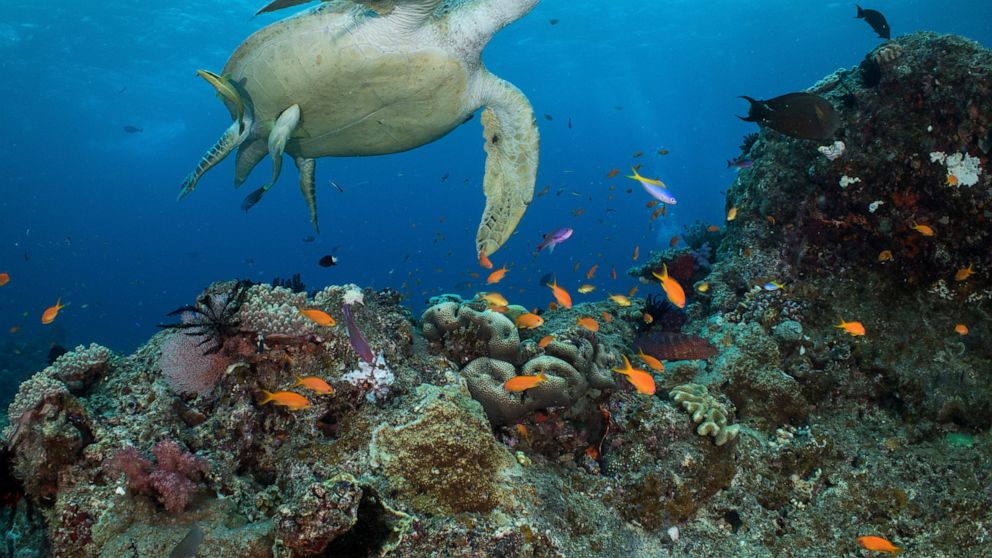 CANBERRA, Australia — Australia’s new government announced on Thursday it plans to prevent development of a coal mine due to the potential impact on the nearby Great Barrier Reef.

Environment Minister Tanya Plibersek said she intends to deny approval for the Central Queensland Coal Project to be excavated northwest of the Queensland state town of Rockhampton.

The minority Greens party has been pressing the center-left Labor Party government, which was elected in May, to refuse approvals of coal or gas projects, to help reduce Australia’s greenhouse gas emissions.

The marine park manages the network of more than 2,500 reefs that cover 348,000 square kilometers (134,000 square miles) of seabed off the northeast Australian coast. The World Heritage Area, designated by the United Nations and Australia's National Heritage List, includes natural, historic and Indigenous places of outstanding significance to the nation.

The mine’s proponents have 10 business days to respond to the proposed refusal before the minister makes her final decision.

The Greens welcomed the news and urged the minister to reject another 26 planned coal mines.

“Now we need an across-the-board moratorium on all new coal and gas projects,” Greens leader Adam Bandt said in a statement.

The proposed decision was announced after the House of Representatives passed a bill that would enshrine in law the government’s ambition to reduce Australia’s greenhouse gas emissions by 43% below 2005 levels by the end of the decade. The bill was passed 89 votes to 55.

The previous government’s target had been a reduction of between 26%-28%, set at the Paris climate conference in 2015.

A proposed Greens’ amendment that would have acknowledged no new coal, oil or gas projects could be started if Australia were to achieve its net-zero emissions target by 2050 was defeated on Thursday.

The government is confident that the bill will be passed by the Senate next month with support from all 12 Greens senators, who would prefer a 2030 target of a 75% reduction.

The apparently doomed mine would have been an open-cut operation that extracted up to 10 million metric tons (11 million U.S. tons) of coal a year.

Britain's 'roughest nightclub' behind secret 'Red Door' is shut down

Op-Ed: How an antitrust trial could reshape the books we read — and who writes them

Sebi comes out with guidelines for overseas investment by AIFs, VCFs

‘Being asked to host my favourite TV programme is dream-come-true territory. I have watched University Challenge obsessively for years, addicted to its high standards, glorious title music, and inspirational contestants’

There are four days of strikes planned in August. Close R ailway workers are striking on a number of days in August in a dispute over pay and working conditions. Members of the RMT, ASLEF, and TSSA unions are walking out, following industrial action in June and July. RMT ...


View more: Train strikes: When are they and which UK and London Overground services are affected?

This week, India and Pakistan celebrate their 75th anniversary of independence. The celebrations represent an important chapter in the dissolution of the British Empire. The partition of India was a controversial decision that was largely made by British politicians unfamiliar with the country. Creating separate states for the Muslim and Hindu populations ...


View more: Reckoning with colonial past on 75th celebration of India and Pakistan's independence

Photograph: stockinasia/Getty Images The American sinologist Lucian Pye famously said that China is a “civilisation pretending to be a nation-state”. But it is precisely the opposite: China is a modern nation-state that pretends to be an ancient civilisation – when it suits its expansionist ambitions. Nowhere is this clearer ...

How do you follow up a hit game like Monster Train? Shiny Shoe’s roguelike deck builder was a massive success and one of the earliest must-play games to join Game Pass back in 2020. Now, the studio is in an unenviable position to make a new game that’s even bigger ...

Anime Fighters Codes – Free Rewards And Boosts – Roblox Anime Fighters remains one of the most popular games in Roblox, and one of our picks of the best Roblox anime games. The main aim of the game is to collect awesome anime characters inspired by your favorite shows ...

Social Security: Who's Ready for an Extra $159 a Month?

It’s hardly a secret that inflation has been hammering consumers since the start of the year. For months on end, consumers have had to dip into their savings and rack up costly debt just to cover their basic needs. And we could be in for many more months of rampant ...


View more: Social Security: Who's Ready for an Extra $159 a Month?

A Growing Team: Emirates To Hold Three Cabin Crew Open Days In The US This Month

Tower Of Fantasy: All Region Scenic Point Locations In Navia

In Bangladesh's success and Sri Lanka's failure, a reminder that free markets matter

Outrage as journalist arrested for alleged Maoist links in India

Bilkis Bano condemns release of her convicted rapists in India

States with the toughest abortion laws have the weakest maternal supports, data shows

One million families missing out on £3,800 help with childcare costs – can you claim?

Shaun Murphy reveals surgery to boost career and stop cruel trolling: ‘I’ve had 80 per cent of my stomach removed’

Amazon Shoppers Write That These Bed Sheets Are 'Beyond Comfy,' and They're on Sale Starting at $25

Child dies from suspected case of brain-eating amoeba in Nebraska, the state's first

LIV Golf players list: Everyone who has quit PGA Tour and DP World Tour to take part in Saudi-backed series

Babies don’t belong at comedy shows, which is why we set one up for new parents and their screaming kids

Jeremy Corbyn spotted with black eye after tripping while out running

What is a pass at A-level? How A-levels are graded, what the results mean and grade boundaries explained

Watch: Why some Texas churches support access to reproductive health care despite the state’s abortion ban

Column: California students are losers when it comes to arts. Voters can change that