Electric vehicles are exploding from water damage after Hurricane Ian

“It's just the allocation of resources that we have to put towards these fires,” North Collier Assistant Fire Chief James Hammond told FOX Business’ Madison Alworth in an appearance on “Varney & Co.” Friday. “And it just ties up resources a lot longer.”

EV batteries that have been waterlogged in the wake of the hurricane are at risk of corrosion, which could lead to unexpected fires, according to Jimmy Patronis, the state's top financial officer and fire marshal.

FORT MYERS SMALL BUSINESSES FACE ‘A LOT OF WORK TO BE DONE’ AFTER HURRICANE IAN: RESTAURATEUR 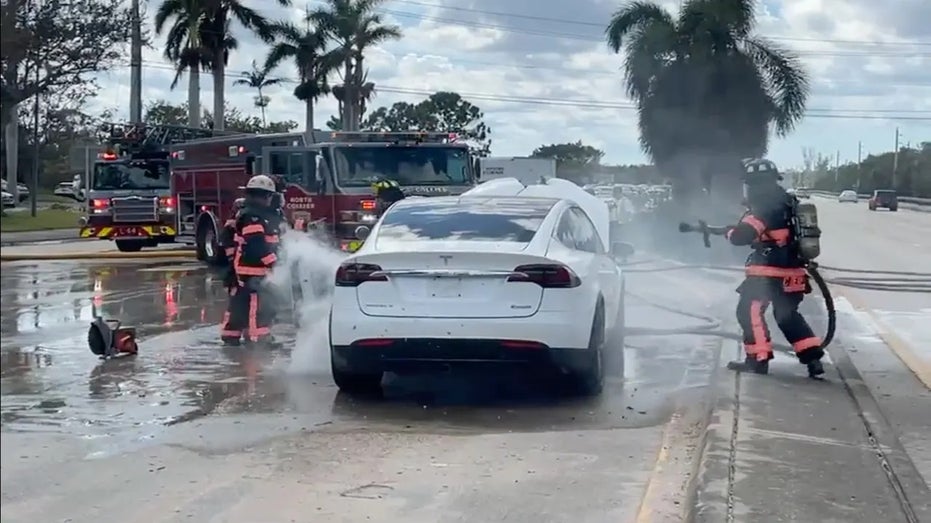 According to Hammond, a typical car fire requires one tank of water and less than an hour to safely put out, while EV fires require much more effort.

“They take up to two hours to cool the batteries, to keep them out of a runaway situation,” the assistant fire chief explained. “And in some cases where we don't have a water source, we have to just secure the area and let them burn because we can't get enough water to them.”

“What we would really ask them to do is get them towed as soon as possible to a service center or wherever they may be going, work with their insurance,” Hammond said. “And if they can't physically get them, try to remove as much as they can, away from them.”

The assistant fire chief recommended keeping a clear and open 50-foot radius between any items and a potentially damaged electric vehicle.

“There’s a ton of EVs disabled from Ian. As those batteries corrode, fires start,” Jimmy Patronis tweeted Thursday. “That’s a new challenge that our firefighters haven’t faced before. At least on this kind of scale.”

Alabama, Kansas State to play in Sugar Bowl; Tennessee, Clemson in Orange Bowl Alabama will face Kansas State in the Allstate Sugar Bowl after missing out on the College Football Playoff for just the second time since the playoff began in 2014. The ninth-ranked Wildcats, who spoiled TCU's perfect season in ...

New York City Deputy Police Commissioner John A. Leach, right, watching agents pour liquor into sewer following a raid during the height of prohibition Was prohibition really the policy failure it is made out to be? The obvious answer is yes — of course, it was a failure. Prohibition ...


View more: Liquor, Capitalism, and the Real Victory of Prohibition

The 15 Best Movies Of All-Time, According To Letterboxd While there are all sorts of websites where you can find ratings and reviews of movies, it seems like Letterboxd is right there among the best. The users there are pretty legitimate film buffs and their opinions can help you ...


View more: The 15 Best Movies Of All-Time, According To Letterboxd

Camden County Police cruiser A 14-year-old from New Jersey was shot and killed Saturday night in Camden, authorities said. Police on Saturday at about 9:32 p.m. responded to a 911 call indicating gunshots had been fired near the 1800 block of Mt. Ephraim Avenue in Camden, according to Camden ...

What is in the law signed by Biden to prevent the railroad workers’ strike?

Woman Forgot Carrots She Planted 7 Months Ago, and Her Discovery Is Massive

Sorry, stoners — doctors have bad news about the medical benefits of cannabis