BBC Breakfast presenter Sally Nugent interrupted a report from Qatar to ask about an odd thing she had spotted in the background of the live video interview. During an interview with a group of UK fans in Qatar ahead of the England vs Wales game set to take place tomorrow (Tuesday, November 29), Sally spotted a large golden sculpture.

During the episode, Sally interrupted the BBC interview to ask: “John, can you settle a little debate for us here in the studio? Jon here is telling me that the giant gold thing behind you is a thumb, I’m not sure, I think it’s a golden baguette.” Sally wasn’t left waiting long before she was told that it was in fact a golden thumb designed by a French artist. 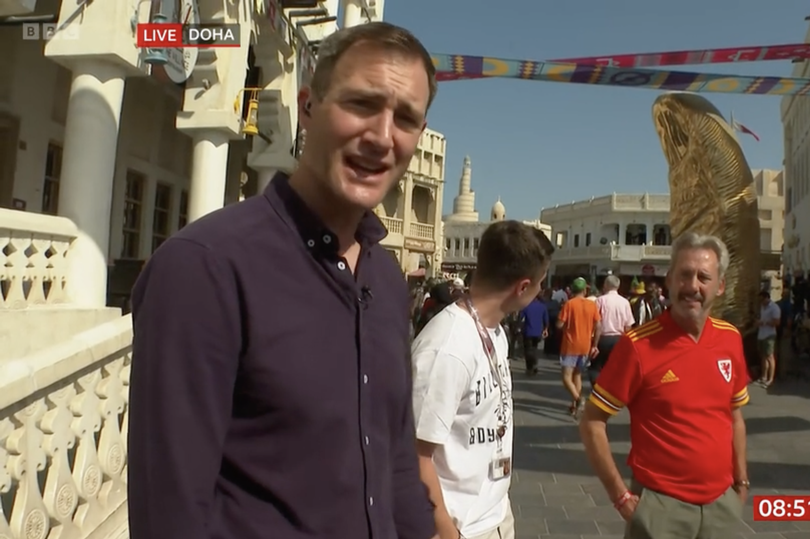 It turns out that the giant golden thumb was put up especially in Doha, Qatar, for the arrival of the World Cup. The reporter, John Watson, who was live in Qatar at the time said that the sculpture may well be a symbol for a ‘thumbs up’ to the tournament which is well underway.

The fans being interviewed at the time couldn’t help but laugh as Sally mistook the thumb for a giant golden baguette but thankfully the ‘mysterious item’ was identified by reporter John Watson and the debate between Sally and her co-star, Jon Kay, was cleared up. 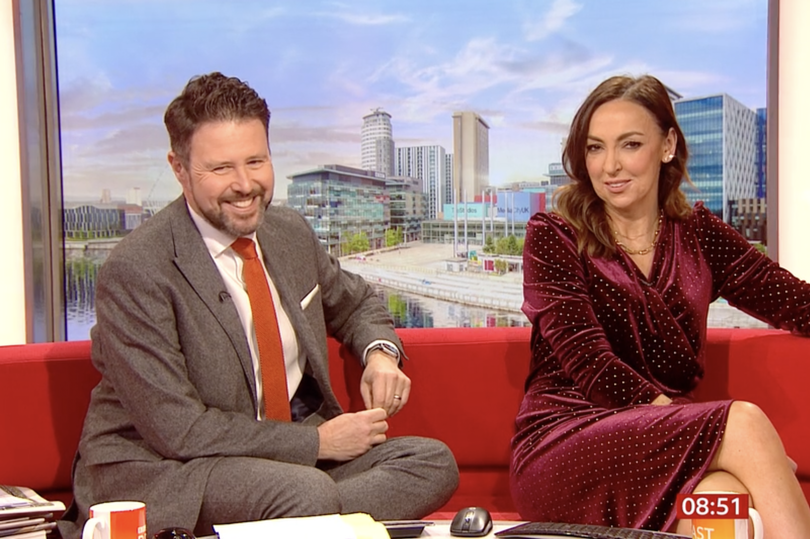 Sally couldn’t help but ask the question on her mind

John Watson said: “It is by a French artist, I’m told. There’s one in Paris that he’s done and then this one was put up for the World Cup.

Sally added at the end of the report: “You clearly know more than me, it is not a golden baguette.”

The pair of presenters then quickly moved on to the next segment of this morning’s show following the odd sighting the background of the World Cup report.

There has been lots of debate and discussion surrounding this year’s World Cup in Qatar, but BBC Breakfast may be the first and last to have a debate over whether a golden baguette was erected in Doha.

TV's Rory the Vet tells ME & MY MONEY why he still pinches himself over his job: £5,000 for one day's filming... now that's animal magic

Charles WANTS Harry to attend his Coronation: The King 'asks Justin Welby to broker deal allowing Duke and Meghan to be at historic ceremony, but William fears his brother will use the event to stage a "stunt" amid fallout from memoir Spare'

Video: 'I'm more angry now and I'm more committed now than I ever was': Trump denounces claims he's 'not campaigning' in first high-profile 2024 speech and said every day is April Fools with Biden in the White House

EXCLUSIVE: Olivia Wilde and Jason Sudeikis are BACK on good terms after ugly custody battle and her split from ex-boyfriend Harry Styles - as they hug it out in Los Angeles

There has been a suppression of the truth, secrecy and cover-ups on an Orwellian scale over the origin of Covid-19 in China

Five members of Memphis Police Department were fired after the January 7 fatal beating of Tyre Nichols, 29 - with several of the officers part of SCORPION team

Royal gun for hire: Former England rugby star and I'm a Celebrity contestant Mike Tindall charges £20,000 to join him on a day's clay-shooting in the Cotswolds

Ex-England Rugby star, married to King Charles' niece Zara, is available to hire Up to 16 guests can join Tindall for a clay shooting package at cost of £20,000 Tindall, 44, was first member of Royal family to appear on ITV's I'm A Celebrity


View more: Royal gun for hire: Former England rugby star and I'm a Celebrity contestant Mike Tindall charges £20,000 to join him on a day's clay-shooting in the Cotswolds

You reddit here first! William and Harry's frog wellies hop back into fashion... for adults - even making an appearance on the catwalks of Milan


View more: You reddit here first! William and Harry's frog wellies hop back into fashion... for adults - even making an appearance on the catwalks of Milan

It comes amid the ongoing cost-of- living crisis that has left millions at the mercy of rocketing energy, fuel, food, and goods prices. Anglian Water, which supplies 2.6 million properties, was the first to set out new charges from April 1. Its prices will rise by between 11.7 and 12.9 ...


View more: Water bills set to soar by up to 12% as as fears grow more will be pushed into poverty

GSK, which makes the jab named Menitorix, said it was stopping production Vaccinations have slashed the number of children suffering MenC infections


View more: Fears as life-saving meningitis vaccine given to toddlers is cancelled by its manufacturer for 'commercial reasons'

Study shows elderly diabetics struggle with high-tech blood sugar trackers which the NHS has offered some 400,000 Britons with the disease


View more: Study shows elderly diabetics struggle with high-tech blood sugar trackers which the NHS has offered some 400,000 Britons with the disease

How Jake Spencer-Churchill, 5, is beating ADHD after the NHS wronging said he had autism thanks to the pioneering professor who diagnosed his father Alexander too

Jake Spencer-Churchill, 5, had trouble settling at bedtime when he was youngerHe was diagnosed with ADHD by neuropsychologist Professor Debora ElijahSince receiving the new diagnosis, he has became a 'completely different boy'


View more: How Jake Spencer-Churchill, 5, is beating ADHD after the NHS wronging said he had autism thanks to the pioneering professor who diagnosed his father Alexander too

Archbishop of Canterbury's relationship with Harry and Meghan has deepenedJustin Welby 'clearly had a lot of sympathy for them [over Megxit]', a source saidKing has asked Welby to broker deal to allow Sussexes to be at his coronation


View more: Archbishop of Canterbury Justin Welby 'has fallen under the spell of Harry and Meghan' say Palace sources

DR ELLIE CANNON: Is itchy skin the legacy of my bout of lyme disease?

IAN BIRRELL: UN experts say lab leak was the 'most likely' cause of Covid-19 and accuse top British and American scientists of helping China to suppress debate on the issue

Never again should women like Amber Heard be silenced by a legal system that dismisses them as liars, whores and gold-diggers... A devastating critique by the actress's lawyer in the wake of her battle with Johnny Depp

DR LIZ O'RIORDAN: The 25-year-old me who drank like a fish would not have listened to warnings about increasing the risk of breast cancer... but did alcohol contribute to by diagnosis aged 40

Manchester United 3-1 Reading: Brazilian midfield duo Casemiro and Fred on target for United as Erik ten Hag's team advance to the FA Cup fifth round... but Marcus Rashford is denied a history-making goal by VAR

European health insurance: How to renew EHIC or get new card for holidays travelling from UK

Video: Katherine Ryan shocks The Masked Singer panel as she is unveiled as Pigeon... after filming while pregnant and just one month before giving birth

Suspect Kaivon Washington, 18, accused of raping LSU student Madison Brooks faces SECOND rape charge in relation to attack on 12-year-old girl when he was 15 in 2020

Katy Perry says she made a 'big mistake' passing on the chance to collaborate with future superstar Billie Eilish: 'I was like, "Meh, boring"'

Has the war on smoking run out of puff? How vapes have muscled in to become the drug of choice in schoolyards by hooking a new generation on nicotine - and easy cash