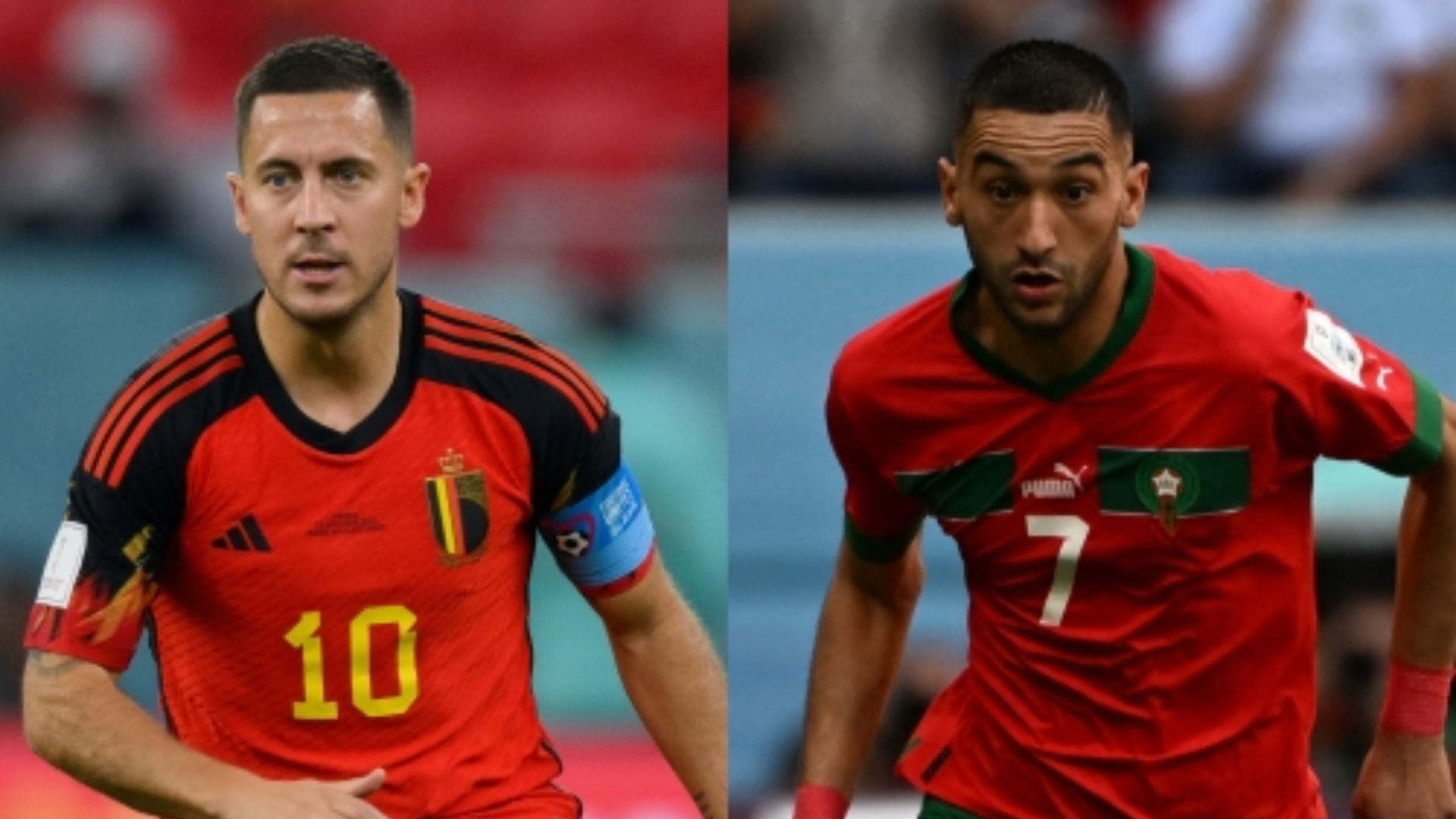 Belgium will hope to continue their winning run when they play Morocco in the FIFA World Cup at the Al Thumama Stadium on Friday.

Roberto Martinez’s men picked up a hard-fought win against Canada in their tournament opener despite being far from their best. An early penalty save by Thibaut Courtois and Michy Batshuayi’s 44th-minute goal sealed the three points. Kevin De Bruyne and co. will likely need to shift up the gears against Morocco to secure their place in the knockouts.

Morocco, meanwhile, showed that they are a tough nut to crack against Croatia as they held the 2018 World Cup runners-up to a goalless draw. They are again expected to make Belgium fight to get the points and if they can hit them on the counter, it will be a historic night for Walid Regragui’s men.

GOAL brings you details on how to watch the game on TV and online in the United States, Africa, the United Kingdom and India.

This page contains affiliate links. When you subscribe through the links provided, we may earn a commission.

How to watch Belgium vs Morocco on TV & live stream online

In the United States (U.S.), the game can be watched live and on-demand with fuboTV (start with a free trial). New users can sign up for a free seven-day trial of the live sports streaming service, which can be accessed via iOS, Android, Chromecast, Amazon Fire TV, Roku and Apple TV as well as on a web browser.

Fans in the U.S. can also watch the match on Peacock, the Fox Sports Network, and Telemundo.

In the United Kingdom (UK) the match will be broadcast on BBC One and live streamed on BBC iPlayer and BBC Sport Web.

In India, the Sports – 18 network has acquired the rights to broadcast the FIFA World Cup.

Romelu Lukaku is facing a race against time to get fit for this fixture. He was involved in training on Saturday and Martinez will have to make a late call on whether he should include the Inter striker in the starting XI. Otherwise, Batshuayi will continue to deputise.

Elsewhere, Thomas Meunier and Amadou Onana might be handed starts against Morocco.

Morocco have no injury concerns ahead of the game. It is likely that Regragui will field the same XI that took to the field against Croatia.

Noussair Mazraoui was stretchered off in the previous game but he is fit enough to start as it was a minor muscular injury.

CBSE Class 10 Physics board exam 2023: Topic-wise tips to ace your board exam

Infinix Note 12i budget smartphone goes on sale in India via Flipkart: Price, specifications and more

Is That A Bear On Mars? Image Captured By NASA Orbiter Drives The Internet Crazy

Vastu Plants For Home: 4 Best Indoor Plants For a Positive And Happy Environment

Mumbai: Two new Vande Bharat trains to run on these routes, PM Modi likely to flag off on February 10

World Leprosy Day 2023: Know about this chronic infectious disease, its symptoms, and treatment

Anurag Basu's 'Metro...In Dino' to arrive in theatres on December 8

No, that's not Shah Rukh Khan but David Warner as Pathaan in edited video. 4 million views and counting!

How to assign a shortcut key to a category in Outlook

Bengaluru Crime: Biker Collides Purposely With Car At 3AM, Chases Couple Inside For 5Km; Shocking Video Surfaces Bengaluru crime: A video of an incident in which a two-wheeler collided head-on with a car in Bengaluru’s Sarjapur at around 3 am on Sunday, January 29 has gone viral on Twitter. ...

Budget 2023 Expectations: Provide tax exemptions, ease in compliance burden to startups, SMEs Budget 2023 is going to be the last full Budget before the general elections in 2024 and the technology sector anticipates greater support from the government much like last year. The technology sector in India has ...

Teen falls asleep in shipping container while playing in Bangladesh, wakes up in Malaysia

Teen falls asleep in shipping container while playing in Bangladesh, wakes up in Malaysia In a strange turn of events, a 15-year-old boy from Bangladesh ended up 2,000 miles in Malaysia after he accidentally fell asleep while playing hide and seek. As reported by the Daily Mail, the boy ...


View more: Teen falls asleep in shipping container while playing in Bangladesh, wakes up in Malaysia

Pathaan, headlined by Shah Rukh Khan, fever has gripped the entire world. Not just fans, but even Bollywood celebrities are celebrating the success of the film. Recently, Boman Irani and his family went to the theatres to watch the spy thriller. Boman was accompanied by his wife Zenobia Irani, sons ...

Draped In Indian Flag While Systematically Looting Indians: Hindenburg’s Response To Adani’s ‘Attack On India’ Remark New Delhi: After Adani Group on Sunday published a 413-page “detailed response to Hindenburg’s unsubstantiated accusations”, the US-based short-seller has responded by saying, “fraud cannot be obfuscated by nationalism or a bloated response ...

After BJP, now Nitish Kumar Rules out Alliance With Saffron Party, Says, 'I Will Rather Die...'

After BJP, now Nitish Kumar Rules out Alliance With Saffron Party, Says, ‘I Will Rather Die…’ PATNA: Bihar Chief Minister Nitish Kumar on Monday ruled out the possibility of a realignment with the BJP, asserting that he will “rather die than join hands” with his former ally. The JD(U) ...


View more: After BJP, now Nitish Kumar Rules out Alliance With Saffron Party, Says, 'I Will Rather Die...'

School Holidays February 2023 Holiday List In February 2023: Several states last month had extended school holidays owing to the drop in temperature. However, as cold wave conditions abated, schools across the country have reopened once again. In February 2023, schools are likely to be closed for 6 days. ...

The State of the Nation: Bank Negara’s pause not leading to a pivot yet as most still see higher rates in 2H

After Undergoing Lip Surgery, Sara Khan Returns To Films With The Era Of 1990

Netflix’s Harry & Meghan series ranks 95th for enjoyment in US

United Kingdom brings in law to kick out 'foreign criminals'

Final nail in the coffin for China: US, Netherlands and Japan enter into agreement for chip sanctions

Valentine’s Day 2023: 5 Bollywood Films To Watch For Couples Staying In

Bangladesh says relations with India going through ‘golden chapter’, thanks New Delhi for inviting at G20

Tamil Nadu: Who is Pushparani? The 45-year-old woman cop who cycles 6 km a day, inspires locals with her cycling habit

When Saif Ali Khan Said Sridevi Was 'Every Man's Fantasy, She Has Those Unbelievable...'

After $200-million move to Saudi club Al-Nassr, Cristiano Ronaldo might return to Europe

Malaika Arora shows you how to do Chakrasana to relieve stress and tension. Watch video

Morgan Stanley Capital International is yet to reach out: Adani Group CFO | Exclusive

OnePlus Pad design officially teased for the first time, here is a closer look at it

Are you eating fruits before going to bed? STOP! Know the right time to eat fruits

Aftercare Tips After A Manicure And Pedicure

If population control law is not enacted now, Ram temple will not be safe: Hindu leader Praveen Togadia

Quinton de Kock might not come to play the IPL if he sees this pitch: Gambhir takes cheeky dig at Lucknow wicket

'Let me touch it': Ankit Gupta recalls 'shocking' casting couch experience, says he was asked to 'compromise' for work

‘No country like India’: Top Sunni cleric says even Gulf countries don’t offer this much freedom for Islamic work