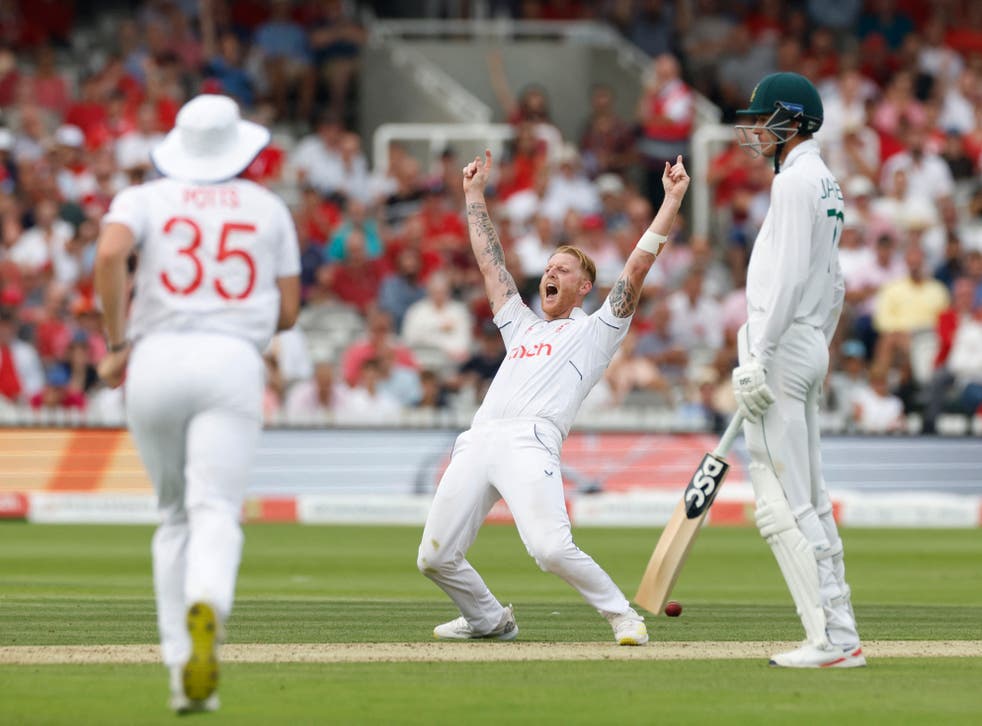 England had lost every session of this Test match convincingly up to tea on day two and were meandering towards an enormous first innings deficit, when the unlikely duo of Ben Stokes and Jack Leach – where have we heard that before? – conjured a spell of fierce bounce and genuine spin to disrupt South Africa’s momentum.

The tourists still hold a commanding 124-run lead after reaching stumps on 289-7, boosted by a late flurry of runs from bowlers Keshav Maharaj and Marco Jansen, having toppled their hosts earlier in the day for only 165 led by Kagiso Rabada’s five-wicket haul. Yet as the sun began to dip behind the Main Stand, the home supporters would have left a humming Lord’s with some small cheer having watched their captain lead the kind of fightback that has become a familiar part of England’s weird and wonderful summer.

England’s success under Brendon McCullum thus far has relied on subverting convention and here again they needed something a little different. James Anderson, Stuart Broad and Matthew Potts had bowled well in patches but South Africa were scoring too easily as the afternoon wore on, reaching tea in total control on 158-2. The left-arm spin of Leach might not normally have been the answer on day two of a Test match at Lord’s, but he found instant rip off the surface and spun a beauty which feathered the edge of Aiden Markram’s bat en route to Ben Foakes’s gloves to change the mood.

From the other end Stokes started crashing short balls into the pitch, and he finally dislodged the seemingly unflusterable opener Seral Erwee on 73 with a bouncer which arrowed at the batsman’s jaw; Erwee fended the ball with his gloves and sent it into orbit to give keeper Ben Foakes a simple catch. A couple of overs later Stokes was celebrating again after trapping Rassie van der Dussen, who reviewed to no avail and got a word in the ear from Joe Root on his way to the pavilion for wasting everyone’s time. Broad had been the least effective of England’s bowling attack so there was added satisfaction when he located the thinnest edge of Kyle Verreynne’s bat late in the day, before Maharaj fell to Stokes.

England might wonder what could have been. Perhaps had Stokes won the toss it would have been his side racking up runs on day two after taking advantage of Wednesday’s inviting bowling conditions. Perhaps had Ollie Pope not been unfortunate in dragging an inside edge on to his own stumps in the third over the morning, he may have gone on to get a crucial century. Instead he was gone for 73 and England’s tail was exposed.

But it still took plenty of South African skill to take the wickets that killed off England’s innings. Rabada got one to straighten to Pope following a flurry of away swingers and then conned Broad for 15 with a slower ball which he chipped cheaply to point. Leach’s off-stump was sent cartwheeling by Jansen, and Rabada finished England off in the next over and sealed his five-for when he trapped James Anderson lbw for a golden duck. With figures of 5-52, Rabada led South Africa back to the Pavilion and raised the ball aloft, to polite applause. 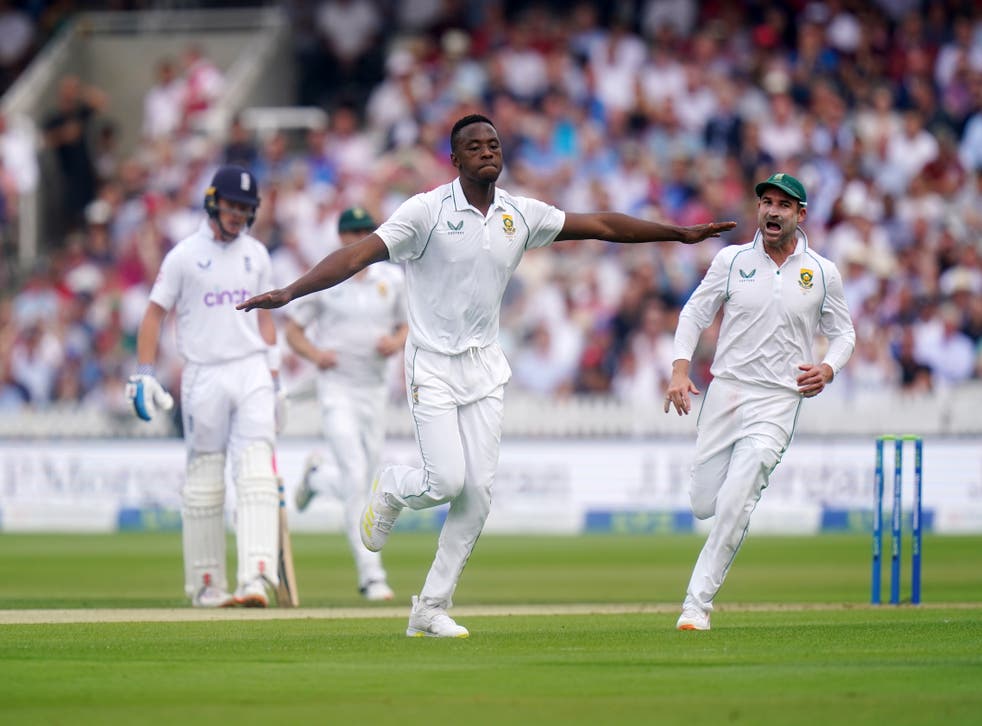 South Africa’s innings began with the familiar sight of Anderson, now 40, running in from the Pavilion End. He bowled predominantly over the wicket to the left-handed opening partnership of captain Dean Elgar and Erwee, who employed some notably anti-Bazball leaves to see off the new ball, while Broad struggled to triangulate his angles coming around the wicket from the Nursery End. First change bowler Potts came closest to a wicket before lunch, bringing a top edge from Elgar’s bat which Zak Crawley got fingertips to but no firm grasp, as South Africa cruised in the sun.

With the openers settled and Elgar on the brink of a half century, Anderson finally made the breakthrough in fortunate circumstances as the ball rattled around the South Africa captain, hitting arm and leg before finally bumping the stumps and removing the bails. Keegan Petersen built a new partnership with Erwee until Potts tempted him into a flail outside off-stump which flew into the grasp of Pope at fourth slip before tea, and soon after Leach and Stokes stepped in to really loosen South Africa’s grip.

But in the final overs Jansen and Maharaj enjoyed themselves to increase South Africa’s cushion – Jansen hit a monstrous six off Stokes as the light faded before Maharaj was caught in the deep – and Rabada will join Jansen at the crease on Friday morning hoping to accelerate further into the distance on what is forecast to be another benign sunny day.

England will take heart from what they have achieved already this summer, not least the fact they scored fewer first-innings runs against New Zealand at Lord’s in June, and still won the game. This might need to be their most impressive magic trick yet but Stokes and Leach have at least given them hope, and that is all this team seems to need right now.

Getting ready for Love Island? Maya Jama flaunts her figure in a purple bikini - 'as it's revealed she's now a multimillionaire' amid rumours she's set for top presenting job

Video: 'We couldn't be happier': X Factor's Eoghan Quigg reveals his girlfriend is pregnant with FOURTH child as he shares heartwarming family snap

What does the plunging pound mean for mortgages: From customers with fixed-rate deals to those looking to get on the housing ladder, vital Q&A on how feared rise in interest rates will affect homeowners and first time buyers

Video: Tommy Little finally completes his English Channel swim for charity: 'I was spewing underwater with every stroke'

Student, 30, is charged with forcing a man she met on an online dating site to have sex with her as court hears she was a 'lot bigger and stronger' than her alleged victim

A little out of line! Overzealous parking wardens are hitting drivers with £100 fines for leaving cars over-hanging spaces by just inches at retail park

Britain to be hit by Arctic blast as Autumn chill bites: Heavy rain and 50mph winds are set to batter parts of UK with temperatures set to fall to 6C overnight as nation feels remnants of Hurricane

Jorgie Porter and Ollie Piotrowski were both there to enjoy the new ride at Alton Towers Jorgie Porter is expecting a baby boy with her fiancé Oliver Piotrowski. The couple suffered several heartbreaks trying to conceive after having lost quadruplets last summer and suffered a second miscarriage in February ...

PARIS – Kazakhstan will join the MotoGP calendar in 2023, promoters Dorna announced on Tuesday, as the premier category of the motorcycle world championship arrives in Central Asia for the first time. “2023 marks the start of a new five-year deal that sees MotoGP touch down in a new region ...

Office for National Statistics says long-term sickness is driving rise in economic inactivity (PA) (PA Wire) Nearly 20 per cent of over-50s who quit work during the Covid pandemic and have not returned are on NHS waiting lists, according to official data. The figure was higher than for those ...


View more: One in five over-50s who have dropped out of UK workforce are on NHS waiting list

Former FIA president Jean Todt said Ferrari diver Charles Leclerc is a Formula 1 Champion in the making, but is "lacking something" that he needs to discover soon to make that dream happen.


View more: Jean Todt: Charles Leclerc is 'missing something' but remains a potential Formula One champion

China’s Zhou Guanyu will remain with Alfa Romeo next season, the team said on Tuesday. The 23-year-old made his F1 debut this year and has scored six points from 16 races, compared with 46 for Finnish team mate Valtteri Bottas. In announcing the move, Alfa said Zhou had “demonstrated ...

She’s known for her stunning beauty. And Pia Whitesell was flaunting her natural assets on Instagram this week, sharing a sizzling swimsuit shot with followers. The 38-year-old was seen posing on a beach by a surfboard in a barely-there fluorescent pink two-piece. Former Home & Away star Pia Whitesell flaunted her ...


View more: Pia Whitesell enjoys a day in the sun as the former Home and Away actress sizzles in a daring pink bikini


View more: Video: TikTok ghouls share sickening footage of what appears to be the moment a young woman was struck by a rollercoaster in front of horrified onlookers - sending her flying nine metres into the air

Video: What does the plunging pound mean for mortgages: From customers with fixed-rate deals to those looking to get on the housing ladder, vital Q&A on how feared rise in interest rates will affect homeowners and first time buyers

'It really consumed a lot of my childhood': Maisie Williams breaks down in tears as she discusses her 'traumatic' relationship with her father

Grief-stricken CEO reveals his daughter, 22, killed herself ‘to be free from the unbearable pain’ after struggling with debilitating case of Lyme disease

‘I wish I could shake my younger self’: Woman shares early warning signs of ‘embarrassing’ condition

Mike Tyson, 56, looks in good spirits at dinner with a female friend after revealing secret Sciatica battle that can leave him unable to walk or talk

Tommy Little finally completes his English Channel swim for charity: 'I was spewing underwater with every stroke'

What happened in 1985 when the pound was last this low

'Insecure, exposed... a worry for the World Cup' - and the Bayern Munich stars are chief suspects for the blame! German press slam their 'weak' team for being 'poisoned' by England - and fear for their chances in Qatar

Max Verstappen is ‘one of the most talented F1 drivers ever’, says Lando Norris

From dividends to pensions and start-ups such as flowers by post firm... How tax breaks will help investors' profits bloom

Police issue CCTV in hunt for man after schoolgirl, 16, was sexually assaulted at train station

Video: Carer whose 44GG breasts meant she was in constant pain and struggled with everyday tasks like cleaning says having 10lb of fat removed in a breast reduction surgery is the 'best thing she's ever done'

House of Commons launches £6m security push for MPs to get close protection officers and guards at homes, offices and surgeries after killing of Sir David Amess

Harry Potter: First edition Philosopher’s Stone hardback to be sold for up to £150,000 at auction

Chess: Did Niemann cheat? 'No evidence' say experts, but saga is lesson for players