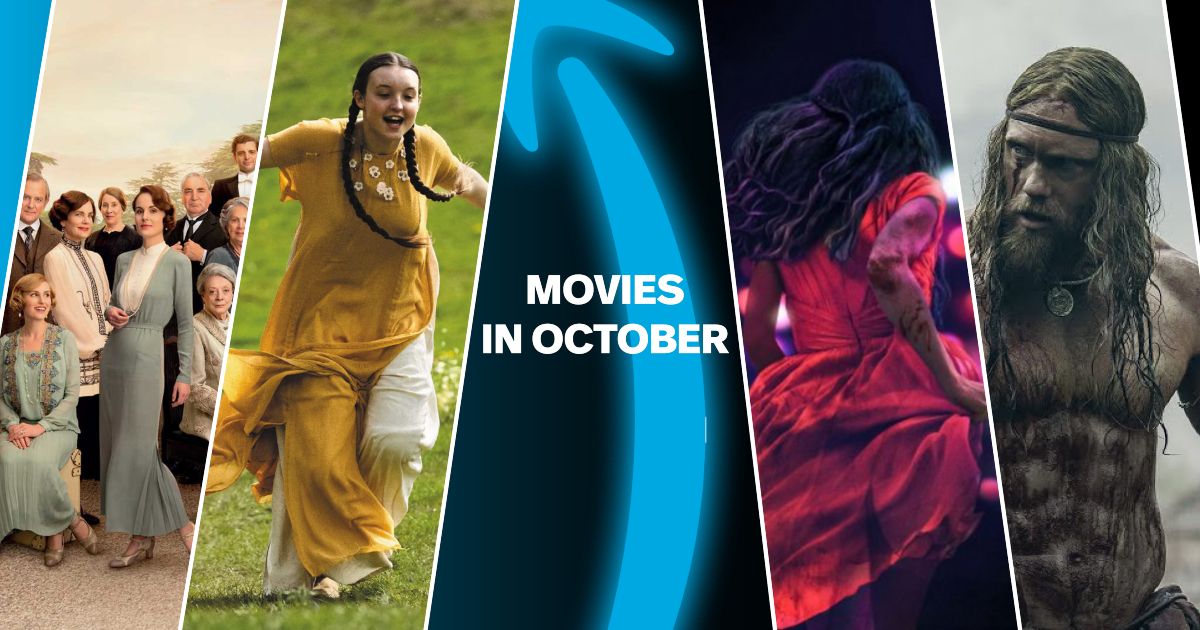 Amazon Prime Video is not a new streaming service, (officially launched in 2011 after a few years experimenting as Amazon Unbox and Amazon Video On Demand, before many others), which gives it a leg up on the competition — it’s consistently remained the second-most popular streaming platform, with over 200 million subscriptions (lagging only behind Netflix). The recent launch of its newest show, The Lord of the Rings: The Rings of Power, certainly helped its cause, and Prime Video is continuing to expand every month, like every other platform.

In October, new episodes of The Rings of Power continue to drop and The Peripheral, a sci-fi show starring Chloë Grace Moretz, will have its world premiere on October 21st. In addition to these shows, Amazon is also releasing new movies on its site throughout the month of October. Some of them are old favorites, some are world premieres, and some of them are recent blockbuster successes first released in theaters and soon available for streaming. Here are the best movies coming to Prime Video this October.

No October movie list would be complete without a campy horror flick. In Unhuman, seven misfit students join forces against the evil undead zombies stalking them. Where did these creatures come from? Who knows. Are they out for blood from the seven vastly unprepared students? Naturally! While this film may not be winning any awards, thankfully, Unhuman doesn’t take itself too seriously and is still a wild, campy ride full of fun horror tropes. Catch this wacky flick when it hits Prime on October 31st, just in time to enjoy on Halloween night.

“One day you wake up and realize you’re not sure who the good guys are anymore.” In Blacklight, Travis Block (Liam Neeson) works as a government special agent and has known all along that his assignments have been questionable and off the record. Or does he? He is about to learn just how corrupt and ruthless his employer is when his family mysteriously disappears. Travis soon uncovers a deadly conspiracy, and he must tread carefully if he hopes to ever see his family again. Blacklight is everything we would expect from a Liam Neeson film, action-packed and full of fast-paced fight sequences. Enjoy this thriller on Prime on October 24th.

“I will avenge you, Father! I will save you, Mother! I will kill you, Fjölnir!” After witnessing the death of his father at the hands of his uncle Fjölnir, young Prince Amleth barely escapes with his life and vows to return when he is older. Now, two decades later, Amleth is strong, fully grown, and ready for vengeance. He won’t stop until his quest to slay Fjölnir is complete.

The Northman is a violent, bloody, epic revenge story that’s strangely satisfying to watch, yet doesn’t have the ending that you would expect (like the rest of the film, it’s typical Robert Eggers — a baffling, beautiful tableau). Packed with a powerhouse cast that includes Alexander Skarsgård, Nicole Kidman, Anya Taylor-Joy, Ethan Hawke, Bjork, and Willem Dafoe, The Northman is a classic tale of a bloodthirsty man seeking revenge and getting his glorious ending.

Downton Abbey: A New Era is a sequel to the popular 2019 film, Downton Abbey, which itself is a spin-off of the beloved television series. This time, the Crawley family is on a quest to discover the mystery behind Countess Violet Crawley’s newly inherited villa in the South of France. This enchanting sequel has all the charm and grace of the adored series, plus plenty of wit and suspense to keep viewers on their toes. Join the Crawley family and their servants as they embark on their newest and perhaps most mysterious adventure when Downton Abbey: A New Era hits Prime on October 28th.

Inspired by true events, Argentina, 1985 is a recent award-winning film that follows the story of a young lawyer, a public prosecutor, and an inexperienced legal team as they join forces and go against all the odds to take down Argentina’s bloodiest military dictatorship. Sometimes courtroom dramas can be boring or slow-paced, but this one promises to be thrilling, intense, and full of strong, complex performances by its leads: Peter Lanzani, Francisco Bertín, and of course the great Ricardo Darín. Set to be released in theaters as well, this crime drama will become available for streaming through Prime Video on October 21st.

Everyone’s favorite secret agent is back, well, kind of — at least the music is back anyway. The Sound of 007 is a brisk but fun documentary that explores the music of the James Bond franchise. This film will take viewers on a musical journey from the ‘first’ James Bond film in 1962, Sean Connery’s Dr. No, to the newest installment of Daniel Craig’s final portrayal in No Time to Die. Get ready for a behind-the-scenes look at the music, the famous artists who wrote the memorable themes, and their true-life stories behind their processes. The Sound of 007 hits Amazon Prime on October 5th.

First dates can be awkward and filled with cringe, but Cherie (Ella Balinska) is about to experience a whole new level of uncomfortableness when her first date with Ethan (Pilou Asbæk) quickly turns violent. Now, Cherie can run, but she can’t hide forever from Ethan who vows to keep stalking her until he finds her and takes, let us say, abnormal liberties with her. Run Sweetheart Run drops on Amazon Prime on October 28th, just in time for Halloween, and promises to be creepy, unsettling, and thrilling.

Hear ye, hear ye. Come one, come all, and watch the fun, feel-good medieval comedy about Catherine Called Birdy. In this coming-of-age story, Catherine (Bella Ramsey), or Birdy (as she is sometimes called due to the many birds she keeps as pets) is determined to find her own way in life. She is a spirited girl who rebukes her father’s plans to marry her off. However, when the most horrible of suitors arrives, an old man she nicknames “Shaggy Beard” and wishes for her hand in marriage, Catherine finds herself at a crossroads. Should she marry the man and put duty first or follow her heart and disobey her parents? Find out when Catherine Called Birdy becomes available for streaming on October 7th.

New Innings for Sidhu in Punjab Congress? State Unit Abuzz That He May Soon Walk out of Jail, Get Key Role

Bayonetta 3 Is on Sale for Cyber Monday 2022

Are you among the 90% who don't know the body's daily protein requirement?

'Could have been studying instead': College students claim made to attend Smriti Irani's event in Gujarat

Grab Bayonetta 3 For Only $45 At Amazon For Cyber Monday


View more: Grab Bayonetta 3 For Only $45 At Amazon For Cyber Monday

PS5 Controllers Are Still On Sale For Cyber Monday

All colors of the DualSense controller are included in this deal.

Mainpuri bypoll: Adityanath takes a dig at Shivpal for changing sides, likens him to a 'football'

New Delhi: Uttar Pradesh Chief Minister Yogi Adityanath on Monday (November 28, 2022) took a dig at socialist leader Shivpal Singh Yadav for changing sides and likened him to a football and a pendulum. Adityanath, who was campaigning for the Bharatiya Janata Party (BJP) in Mainpuri, the Samajwadi Party ...


View more: Mainpuri bypoll: Adityanath takes a dig at Shivpal for changing sides, likens him to a 'football'

How IGI Airport may emerge as India’s first true global hub NEW DELHI: The capital’s IGI Airport is on its way to become the first global hub of India. The Modi government is working with Delhi International Airport Ltd (DIAL), Tata Group airlines led by Air India, IndiGo and ...

Grab a Roku Ultra for $32 off Today


View more: Grab a Roku Ultra for $32 off Today

What is consciousness, Werner Herzog asks in new film that poses tough questions to scientists about where our thoughts and feelings come from

Sharman Joshi Requested Rohit Shetty For Next Golmaal Film, Know Why He Was Dropped From Series

The best Cyber Monday 2022 deals for your zodiac sign

Brawn retires from Formula One saying his work is done

Last Chance To Get Marvel's Spider-Man: Miles Morales For Cheap

Can you use 2 Power Supplies in one computer?

He demanded massage; ordered me to clean his clothes & boots: Akram's glaring revelation on Saleem Malik

Why should I say sorry? asks TMC MLA for remarks against PM Modi, Amit Shah

Amazon Studios to Invest $1 Billion per Year in Theatrical Movies

FIFA World Cup 2022: Spain draw was certainly a step up from us, says Germany's Joshua Kimmich

These are the 5 Best Apple Watch Deals this Cyber Monday

Portugal vs Uruguay: Fede Valverde is an embodiment of the spirit of Garra Chharua

This café in Japan serves coffee latte art. Watch the artist in action

My future sister-in-law tried to fight me. Do I need to apologize?