There is speculation that 2.22pm timing may have a biblical significanceMay refer to when bells rang between 1.27pm until 2.22pm for George VI in 1952 Royal expert Robert Lacey told MailOnline that it is likely a question of timingIs set to take procession exactly 38 minutes to reach Westminster Hall at 3pm Full coverage: Click here to see all our coverage of the Queen’s passing

When the King and his sons walk behind the Queen’s coffin today, they will leave Buckingham Palace at exactly 2.22pm.

The royal family will accompany their matriarch on foot on the journey to Westminster Hall where hundreds of thousands of people are expected to pay their respects after queueing for what could be as much as 40 hours.

The exact reason for the timing has not been disclosed by the Palace, but there is speculation that it may have a biblical significance or be a tribute to the Queen’s father King George VI.

However, royal biographer Robert Lacey told MailOnline that the simple reason of ensuring the procession arrives at Westminster Hall at 3pm is likely to be behind the timing.

He said: ‘It will have been carefully paced out. It is not plucked out of the air.

‘And I am presuming that allowance will be made for the number of people who will walk behind.’

It is set to take the procession exactly 38 minutes to reach Westminster Hall, where a service led by the Archbishop of Canterbury will be held for 20 minutes before the Queen lies in state for four days. 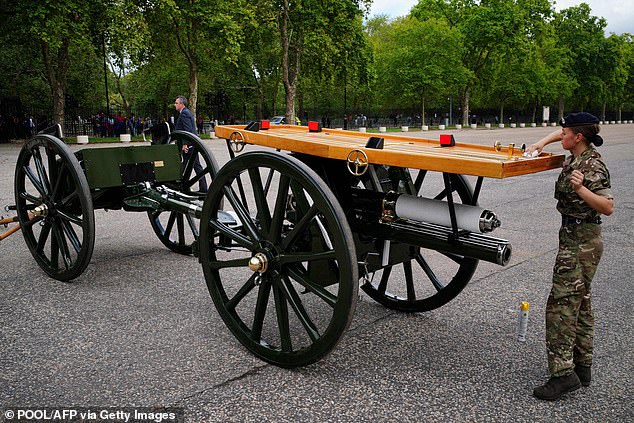 Among some Christians, the number 222 has a special significance in representing unity and love and the personal relationship with God.

The Queen was herself a devout believer.

It comes after members of the Household Division rehearsed taking the Queen’s coffin from Buckingham Palace to Westminster Hall overnight.

The 512-strong cortege, dressed in their ceremonial attire, were illuminated by the city’s street lights as they rehearsed for the transfer.

The early-morning rehearsal saw the horse-drawn carriage of the King’s Troop Royal Horse Artillery being led along the route.

A black coffin was placed on the gun carriage and, at around 4am, the procession was ordered to march and the carriage, pulled by seven black horses, made its way through the city. Police officers on horseback were also included in the rehearsal.

Many of central London’s streets were sealed off for the massive operation. 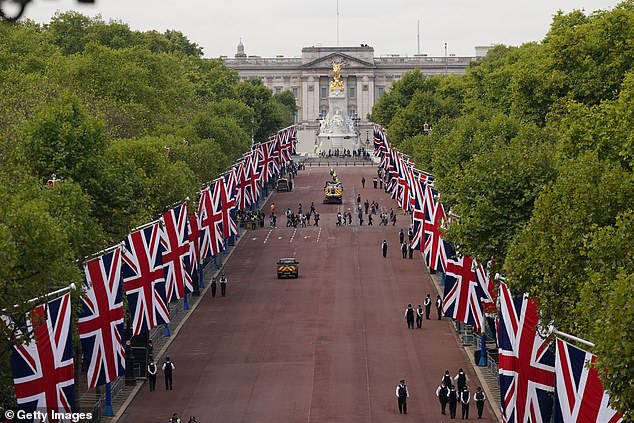 Princess Anne’s son Peter Phillips and her husband Vice Admiral Sir Tim Laurence will also walk behind the procession, as well as the Duke of Gloucester and the Earl of Snowdon.

The Queen Consort, the Princess of Wales, the Countess of Wessex and the Duchess of Sussex will travel by car.

Thousands of mourners have already joined the queue to attend the Queen’s lying in state which begins at 5pm, continuing until 6.30am on Monday September 19, the day of the Queen’s funeral.

Government guidance says the queue is expected to be very long, with people standing for ‘many hours, possibly overnight’ and with very little opportunity to sit down.

There were emotional scenes on Tuesday evening when the late Queen was brought back to London by plane and taken to Buckingham Palace for the final time.

As the hearse carrying the coffin began its journey from Northolt in north-west London, people stood silently by the road with some recording the historic moment on their camera phones.

The Queen’s grandchildren were among members of the royal family paying their respects to the late monarch by witnessing her coffin’s arrival at the palace.

On Wednesday, the presence of Charles, William and Harry in the procession will see the father and sons united in their grief for a mother and grandmother.

William and Harry put on a united front with their wives during a mammoth walkabout on Saturday.

The brothers have a well-documented troubled relationship but the death of their grandmother saw them unexpectedly come together when they viewed floral tributes left to the late Queen at Windsor Castle.

William, Kate, Harry and Meghan arrived in the same vehicle and greeted well-wishers for around 40 minutes before William hopped into the driver’s seat of the Audi with his wife in the passenger seat, and his brother and sister-in-law in the back.

Then in Harry’s tribute to his grandmother he said he wanted to honour his father at the start of his reign as King. 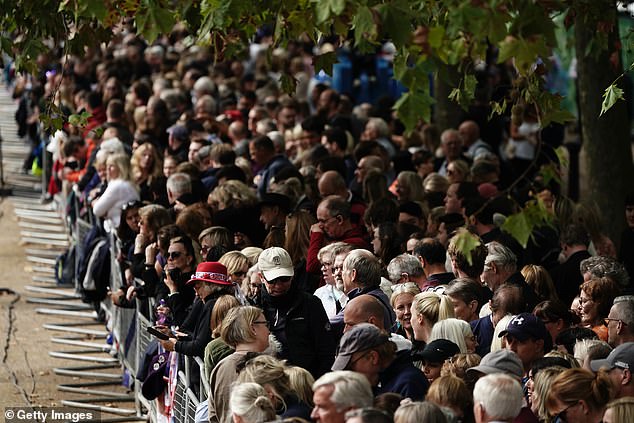 The exact reason for the 2.22pm departure has not been disclosed by the Palace, but there is speculation that it may have a biblical significance or be a tribute to the Queen’s father King George VI. Above: Crowds gather on The Mall ahead of the procession today

The last time Charles and his two sons were all seen together in public was at the service of thanksgiving for the Queen in St Paul’s Cathedral during the Platinum Jubilee celebrations in June.

But on that occasion, Harry and Meghan were seated some distance from Charles and William on the other side of the aisle in the second row, behind the Wessex family and the Duke and Duchess of Gloucester.

The Jubilee service at St Paul’s was Harry and Meghan’s first public appearance alongside the Windsors since they stepped down as senior royals in 2020 amid the Megxit storm.

In April 2021, Harry and William joined their father when they walked behind the Duke of Edinburgh’s coffin at his funeral.

The brothers were separated by their cousin Peter Phillips but he dropped back half a pace at one point so the siblings appeared closer together.

After the funeral service, William and Harry could be seen chatting as they walked back up the hill from the chapel to the castle. 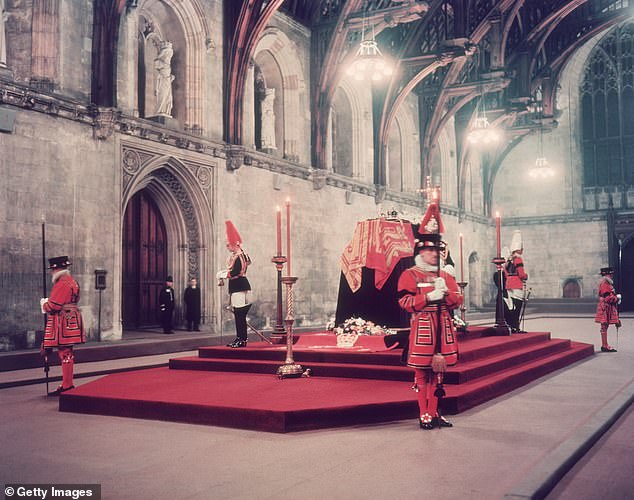 ATHENS, Ga. (AP) — Stetson Bennett threw two touchdown passes and No. 1 Georgia completed back-to-back undefeated regular seasons for the first time in school history by overcoming a slow start to beat Georgia Tech 37-14 on Saturday. Georgia (12-0, No. 1 CFP) was down 7-0 early and led ...