Biden offered a toast “to the history that binds us and the values that still unite us, and the future we're going to forge together."

There were kisses all around as the Bidens stepped out on the North Portico to welcome the Macrons — Jill Biden in an off-the-shoulder navy Oscar de la Renta gown, Brigitte Macron in a high-necked ivory one by Louis Vuitton.

Jill Biden’s open invitation as the foursome headed inside: “Enjoy the evening.”

Other guests trickled in via a side entrance, seeming keen to do just that. First to arrive: Louisiana Gov. John Bel Edwards, followed not long after by Gov. John Carney, from Biden’s home state of Delaware.

Julia Louis-Dreyfus whizzed by the press, pausing only to say that, yes, she’d been to a state dinner before and it was all “very exciting.” Late-night TV host Stephen Colbert said nothing as guests passed through a White House decorated for the holidays and boarded trolleys for the ride down the South Lawn to a heated party tent. 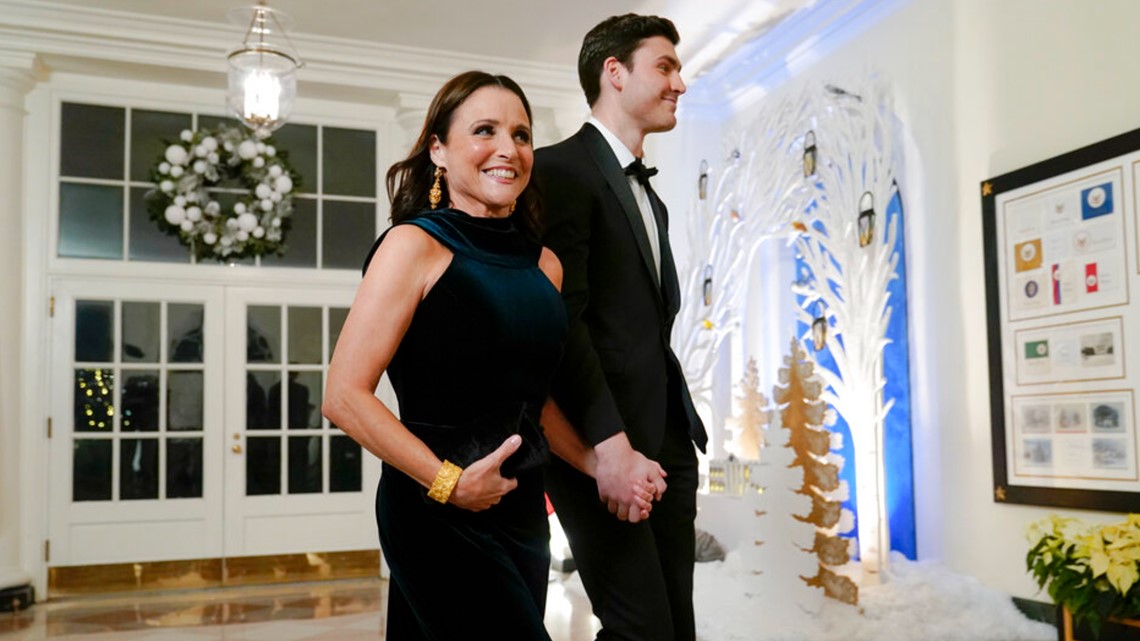 Shoe designer Christian Louboutin — wearing a crystal bolo tie — said “I have no idea” when asked how many women might be wearing his red-soled shoes for the night, and wouldn’t hazard a guess. Vogue editor Anna Wintour also was among the 338 names on the guest list.

Biden family made the cut too: Adult children, Hunter and Ashley, and sister Valerie Biden.

Outgoing House Speaker Nancy Pelosi, D-Calif., was there, as was House Republican leader Kevin McCarthy of California, who hopes to succeed Pelosi. She got a seat at the head table with the Bidens and Macrons; McCarthy did not.

Asked how he felt about attending a dinner with Hunter Biden, whom Republicans are keen to investigate when they take control of the House in January, McCarthy said, “I’m at dinner with my mom and I’m going to have a great time.”

Other lawmakers were excited to introduce family members who accompanied them. Rep. Lisa Blunt Rochester, D-Del., who wore a royal blue one-shoulder gown and elbow-length black gloves, brought her niece, Hannah Carter, who told her aunt the affair “feels like Bridgerton,” referring to the Netflix romance series. 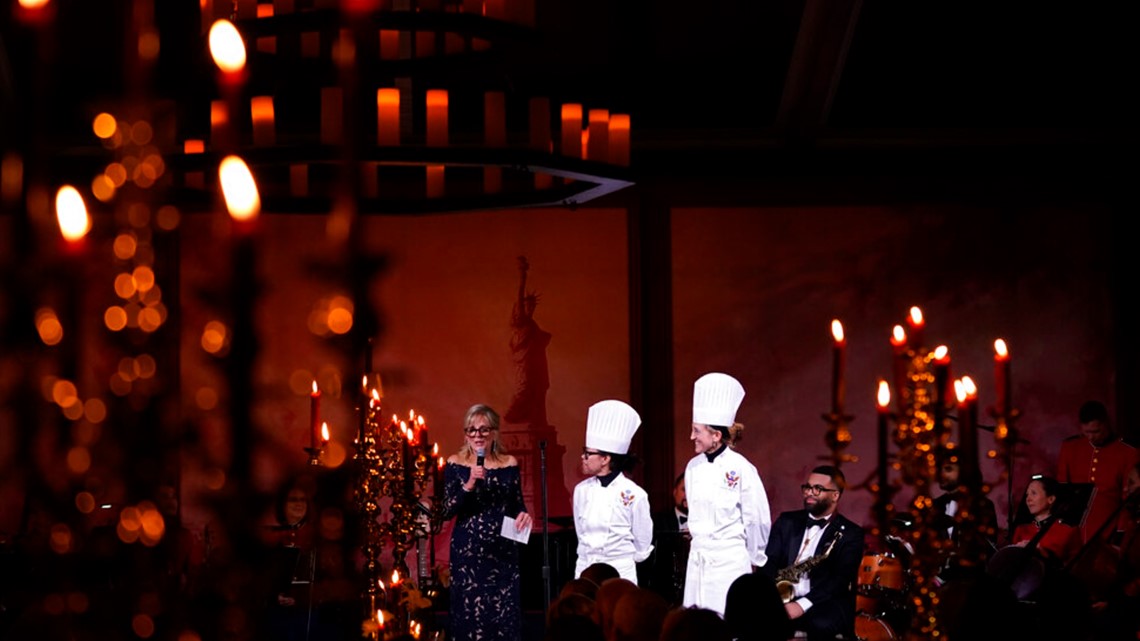 Before dinner, which ran late, Biden offered a toast “to the history that binds us and the values that still unite us, and the future we’re going to forge together. Vive la France and God Bless America.”

“I do hope you had a great dinner,” Macron joked as he opened his reciprocal toast to “Dear Joe.” Guests, many of them presumed to be hungry, laughed.

“This evening we are not just honored and moved, but we feel the importance of this moment,” Macron said. “It means a lot for all of us, because this is our history.”

With the tent ready and the tables set for the big dinner, hostess Jill Biden earlier Thursday took her French counterpart to a language museum to highlight their mutual interest in learning and their growing friendship.

The declaration of friendship fit the occasion. A state dinner is a high diplomatic honor, one the United States bestows only on its closest allies — like France, one of America’s oldest.

Guests began trickling in to the White House as the sun set, dressed to impress and looking forward to saying they played a small part in history — the first state dinner hosted by the Bidens.

The guest list also had a heavy presence of big Democratic donors who helped the party make a better-than-expected showing in the midterm elections. Among them, Katzenberg, a big Hollywood money man; Avram Glazer, who in recent years has given hundreds of thousands of dollars to Democratic causes; and Alexander Soros, the son of George Soros and deputy chair of Soros’ Open Society.

Butter-poached Maine lobster, beef with shallot marmalade and American cheeses were on the menu for the red-white-and-blue themed dinner. Dessert was orange chiffon cake with roasted pears and crème fraiche ice cream. American sparkling wine was served for the toasts.

Guests dined on rented tableware because place settings from the White House china collection are not allowed to be removed from the executive mansion. They were seated at a mix of square and rectangular tables with dark blue silk cloths, red candles and arrangements of red, white and blue flowers, including white irises, the official flower of France. 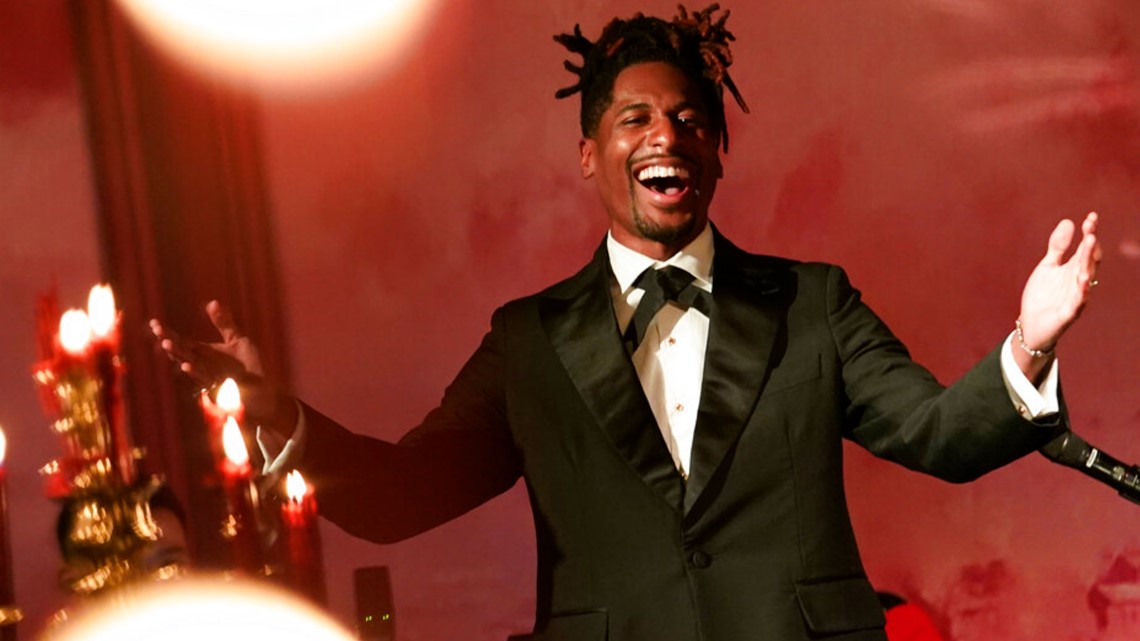 Jon Batiste, a Grammy Award-winning New Orleans native and the former bandleader and musical director of “The Late Show with Stephen Colbert,” provided the after-dinner entertainment.

“It’s going to be fire,” Batiste promised ahead of his performance.

The White House had not held a state dinner since September 2019, largely because of the COVID-19 pandemic, which put a damper on gatherings of large numbers of people.

But entertaining is back at the White House.

Thursday’s dinner followed last month’s wedding of Biden’s granddaughter on the South Lawn with 250 guests. And tens of thousands of people will stream through the White House this month, including tourists and others invited to nearly a month’s worth of holiday receptions.