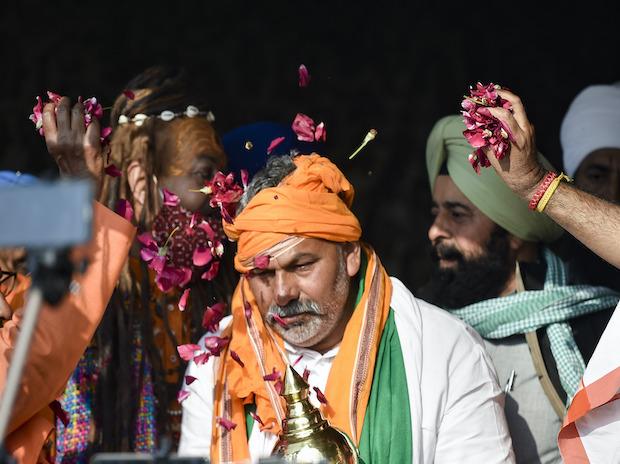 The Bhartiya Kisan Union (BKU) has announced support to the proposed August 21 protest in Noida by the Tyagi community against the alleged “harassment of Shrikant Tyagi and his family” and sought his immediate release.

Tyagi, who claimed to be a BJP leader, was recently booked after a viral video showed him pushing a woman and abusing her for opposing encroachment in a Noida housing society.

BKU national president Naresh Tikait said, “This matter could have been resolved through talks. Using bulldozers to pull down alleged illegal constructions and slapping of the Gangsters Act on Shrikant Tyagi and harassment of the family by the administration was certainly unwarranted. There is a proper procedure that could have been adopted.”

He further said, “We demand immediate release of Tyagi, who is in judicial custody at present), and withdrawal of the serious sections from the FIR against him. This is injustice.”

Replying to a question, Naresh Tikait said, “The Tyagi Samaj will always be a part of BKU. We cannot ignore our supporters. We respect women, and a fair investigation should be conducted in the matter.”

Shrikant had gone into hiding after he was booked earlier this month. Police had then announced Rs 25,000 reward for information on him. He was arrested in Meerut on August 9 after a five-day chase.

Slaven Vlasic/Getty Images While HBO has been known for a number of dramas, such as “The Sopranos” and “Game of Thrones,” their reputation for comedies has also increased over the years. One of the shows that helped with that was “Silicon Valley.” Created by Mike Judge, who previously made ...

A man was seriously injured after being shot multiple times outside a youth football game in Southern California on Saturday, authorities said. The Ontario Police Department said that the victim, believed to be a 34-year-old man from Pasadena, was targeted on a sidewalk between the playing field and the parking ...

pic.twitter.com/EzxImHtqBP — Tesla (@Tesla) October 1, 2022 Elon Musk’s much-touted droid is a dud — at least compared to the state-of-the-art robots from Boston Dynamics. Such was the reaction on Twitter and other social media after Musk unveiled Tesla’s “Optimus” prototype on Friday. The self-controlled humanoid bot tottered onstage ...

Derrick Rose lost weight since last season. So did Julius Randle. The Knicks’ roster has more youth and a true playmaking point guard.  It all points in one direction: a more uptempo style than fans have been accustomed to. Coach Tom Thibodeau gave hints of that adjustment Tuesday when he ...

AUSTIN, Texas —  One of two Texas brothers who authorities say opened fire on a group of migrants getting water near the U.S.-Mexico border, killing one and injuring another, was warden at a detention facility with a history of abuse allegations. The shooting happened Tuesday in rural Hudspeth County about 90 ...