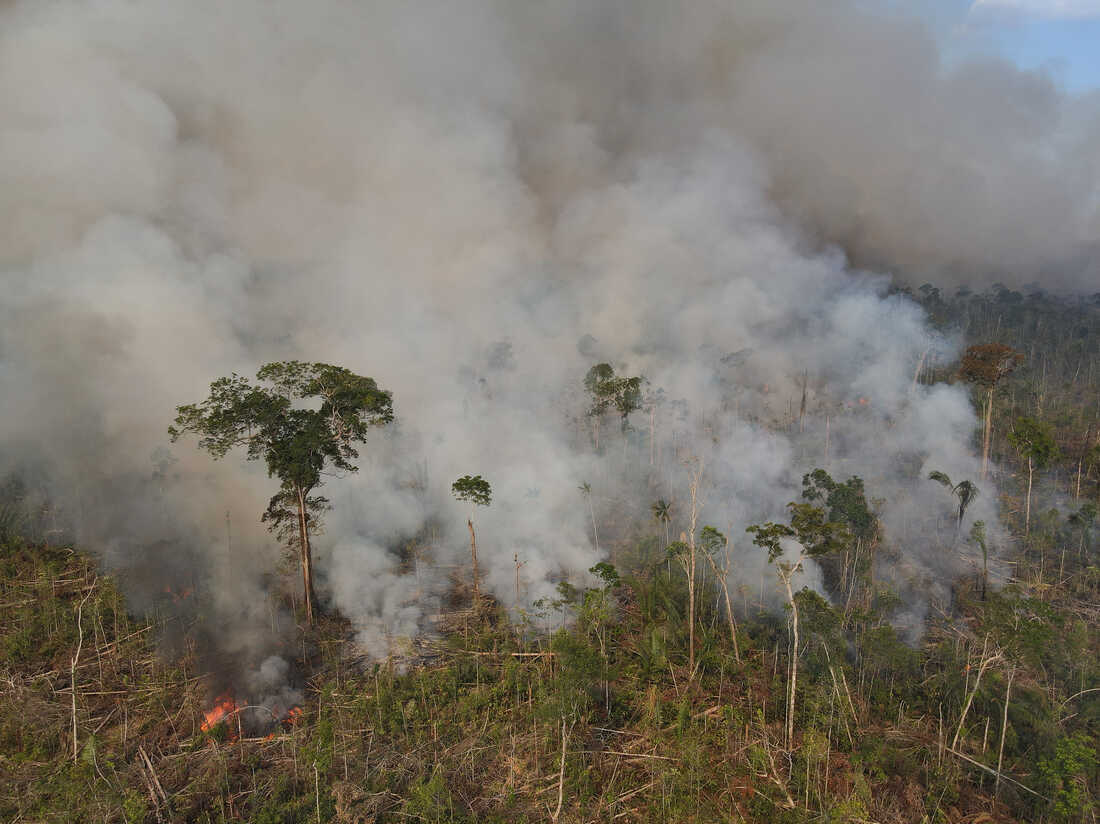 A large fire in a recently deforested area of the Amazon rainforest along Highway BR-319 in the state of Amazonas, Brazil, on Sept. 25. Bruno Kelly for NPR hide caption

HUMAITÁ, Brazil — Dorival Costa has no qualms about scorching the earth.

The 70-year-old farmer in the Brazilian Amazon has just set fire to 5 acres of rainforest that he will convert into cattle pasture. Torching the jungle is illegal but as Costa moves through his plot, clearing away charred underbrush with a machete, he just shrugs.

“I’ve been fined three times” for deforestation, Costa says. “But it’s a joke. Nobody around here ever bothers to pay.” 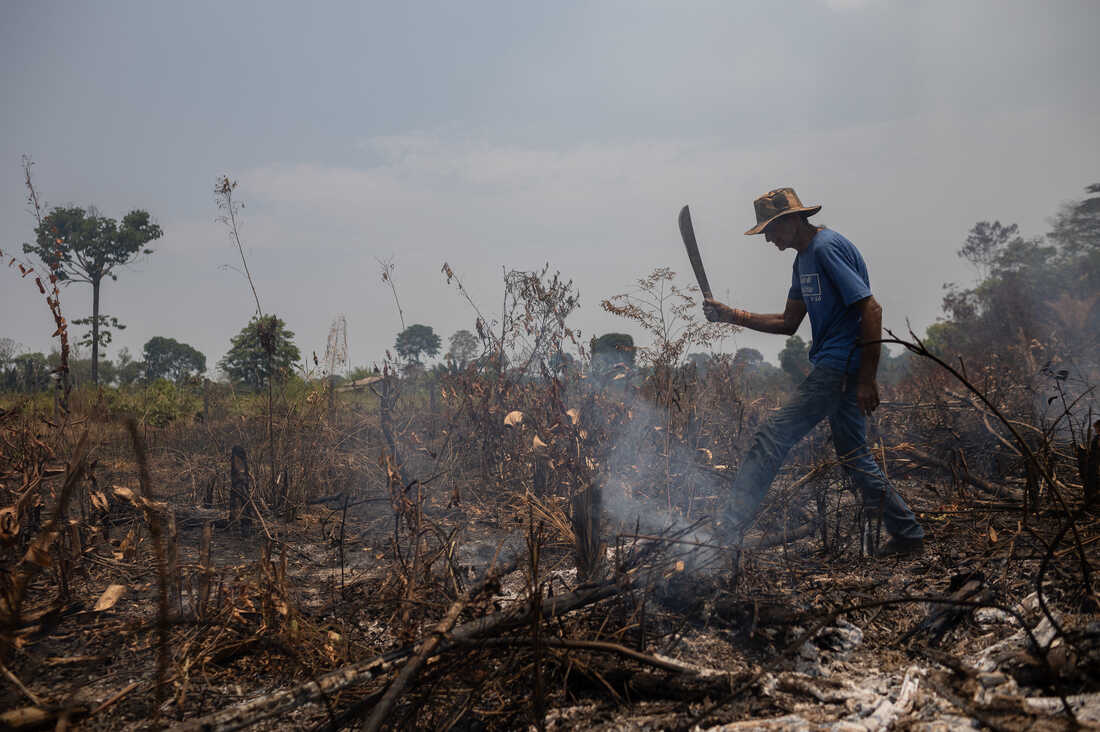 Seventy-year-old farmer Dorival Costa on his land on the BR-319 highway through the Brazilian Amazon on Monday. Bruno Kelly for NPR hide caption

Costa and other settlers have been cutting down the world’s largest rainforest at record rates. Under President Jair Bolsonaro, who is trying to win a second term in Sunday’s presidential election, more than 13,000 square miles of jungle have been lost, according to Brazil’s National Institute for Space Research that tracks fires in the Amazon.

That’s an area larger than Maryland.

Environmentalists and political analysts chalk up the damage to two main factors. Bolsonaro, they say, has encouraged more farming, ranching and mining in the Amazon while at the same time slashing the budgets and staff of government agencies tasked with protecting the jungle and stopping deforestation. 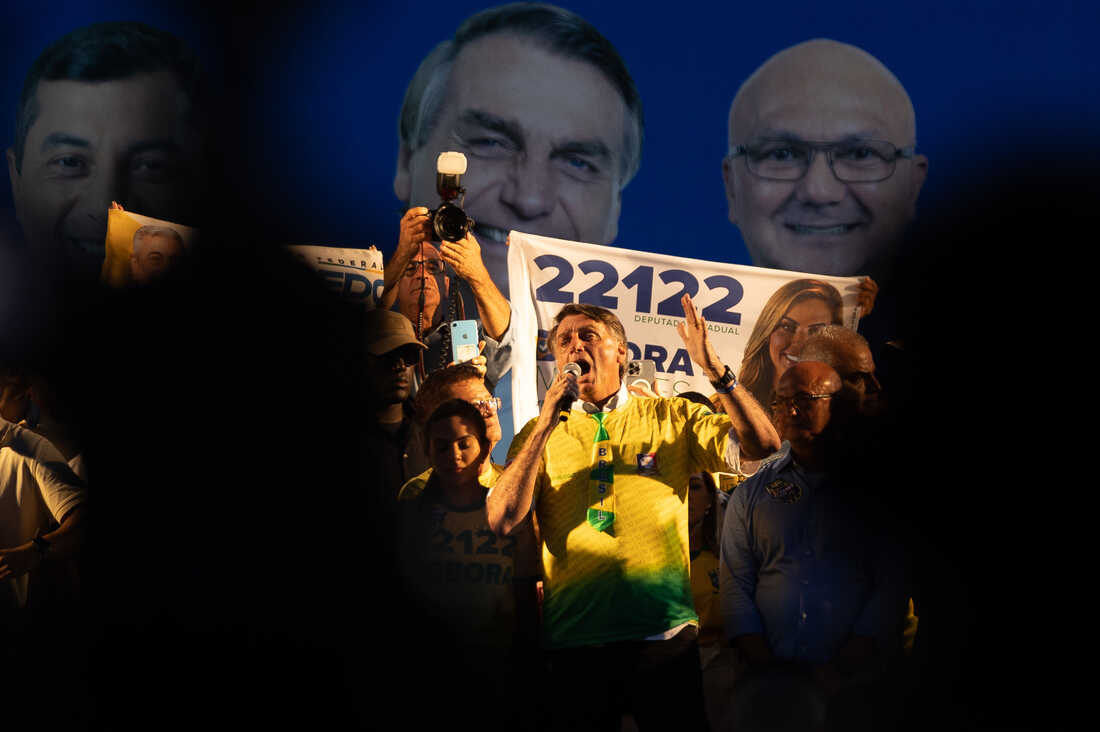 Brazil’s President Jair Bolsonaro at a campaign rally in Manaus, capital city of Amazonas state, on Sept. 22. Bolsonaro, a former army captain who has ironically referred to himself as “Captain Chainsaw,” views the Amazon as a source of jobs and economic growth and has encouraged people to settle there. Bruno Kelly for NPR hide caption

“They’ve all just been gutted,” said Philip Fearnside, a biologist at Brazil’s National Institute for Amazonian Research in the city of Manaus. “It sends a message to people who are at the front lines deforesting that they can violate any environmental laws they want and all will be forgiven.”

Indeed, during a four-day trip through the Amazon, an NPR journalist did not come across a single police officer orgovernment official enforcing environmental regulations. Fires dotted the landscape. At times, massive clouds of gray smoke partially obscured the sun. Black specks of ash fluttered down from the sky.

Meanwhile, highway maintenance crews were busy smoothing out the main road running from Manaus southwest through the Amazon, making it easier for newcomers to gain access to the jungle. 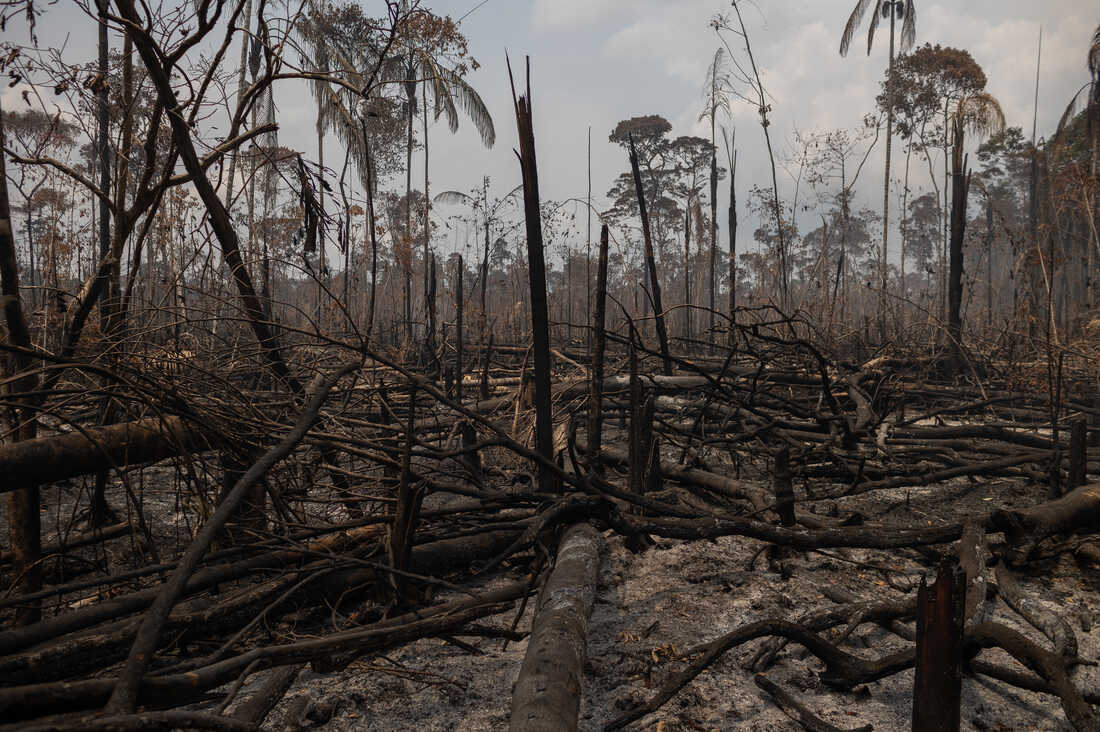 Recently deforested and burned Amazon rainforest along the BR-319 highway through the Brazilian Amazon on Tuesday. Bruno Kelly for NPR hide caption 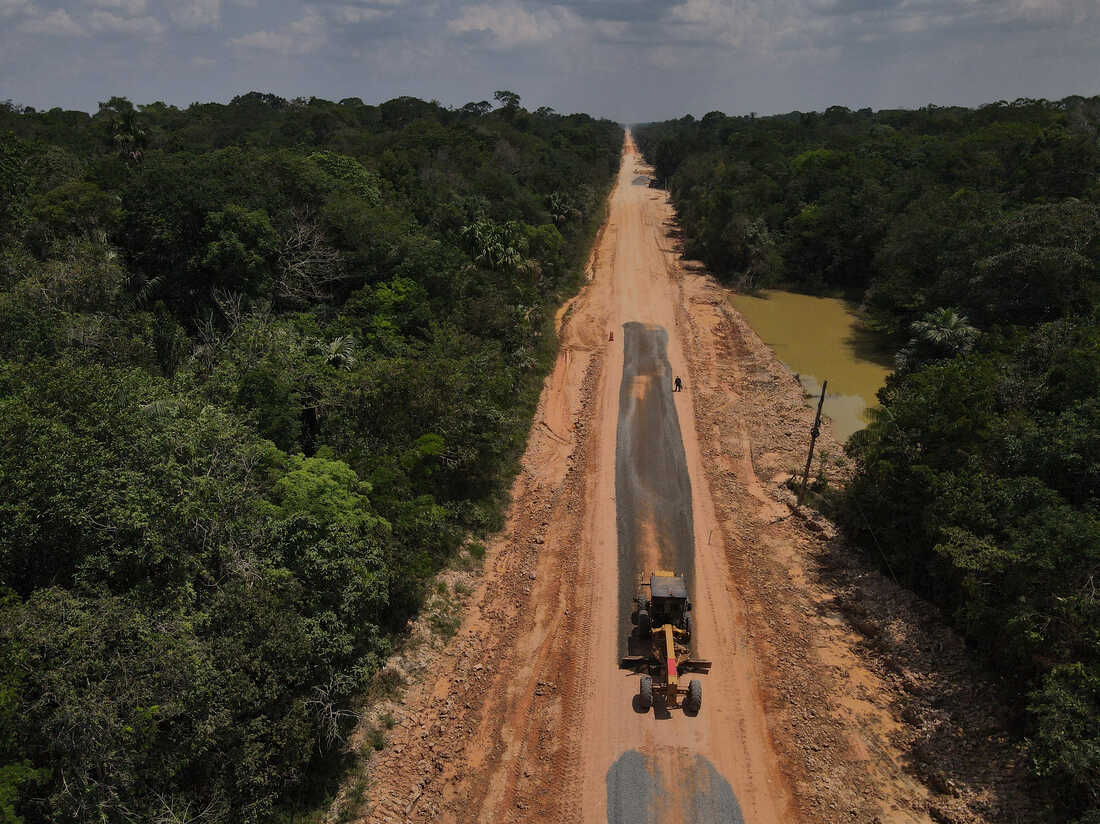 Construction on the BR 319 highway that runs through the Brazilian Amazon on Sept. 25. Bruno Kelly for NPR hide caption

Among the recent settlers is Marcelo García, who was lying shirtless in a hammock on the porch of his two-room wooden house surrounded by an expanse of downed trees, blackened stumps and smoldering underbrush. García arrived here last month and has already cleared 40 acres of jungle.

“This is my land. I bought it with my own money. And I can decide what to do with it,” García says, his voice rising. 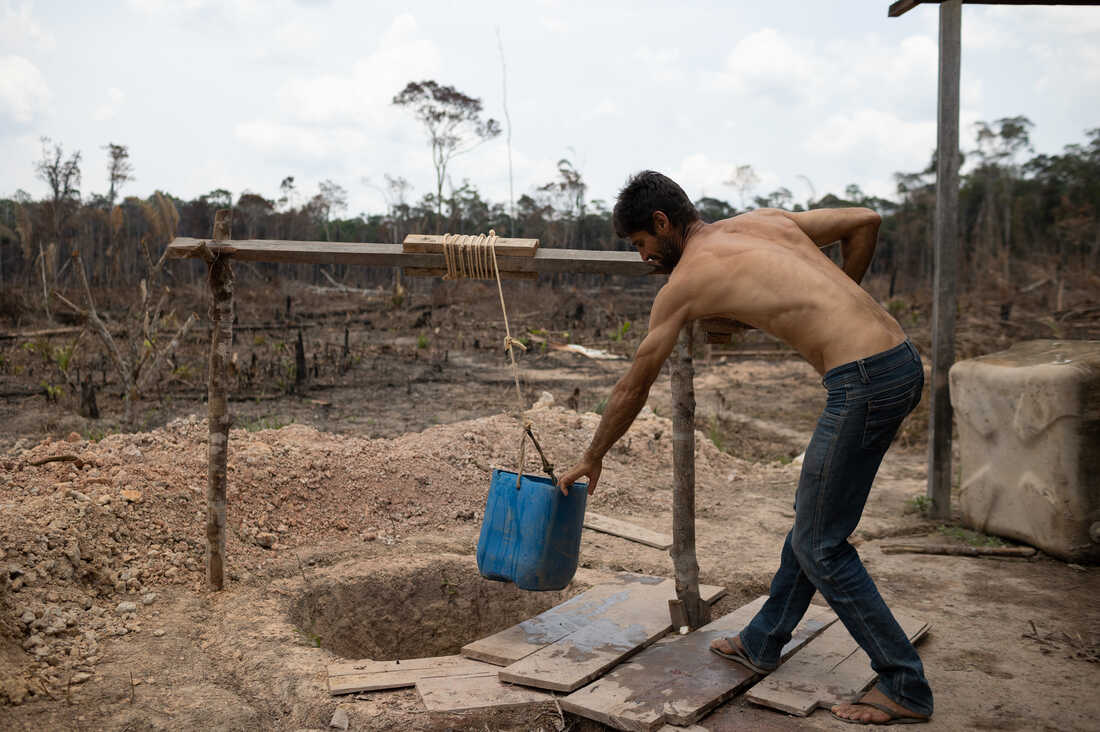 Marcelo Garcia, 45, gets water from a well at his home in an area of the Amazon that was deforested and burned in Amazonas, Brazil on Tuesday. The well is the only source of water at his home. Bruno Kelly for NPR hide caption

García claims that he bought the land to plant cassava and other crops. But there’s a for-sale sign out front. What’s more, Fearnside and other experts say that it’s a common practice for land speculators to pay squatters to occupy their properties and clear away the jungle for ranching and large-scale farming.

In fact, deforesting can double property prices, says Rose Marcondes, 45, as she keeps an eye on the fire burning on her plot of land just off the highway. Still, when it comes to destroying the Amazon, she claims that small farmers like herself are not the main culprits. 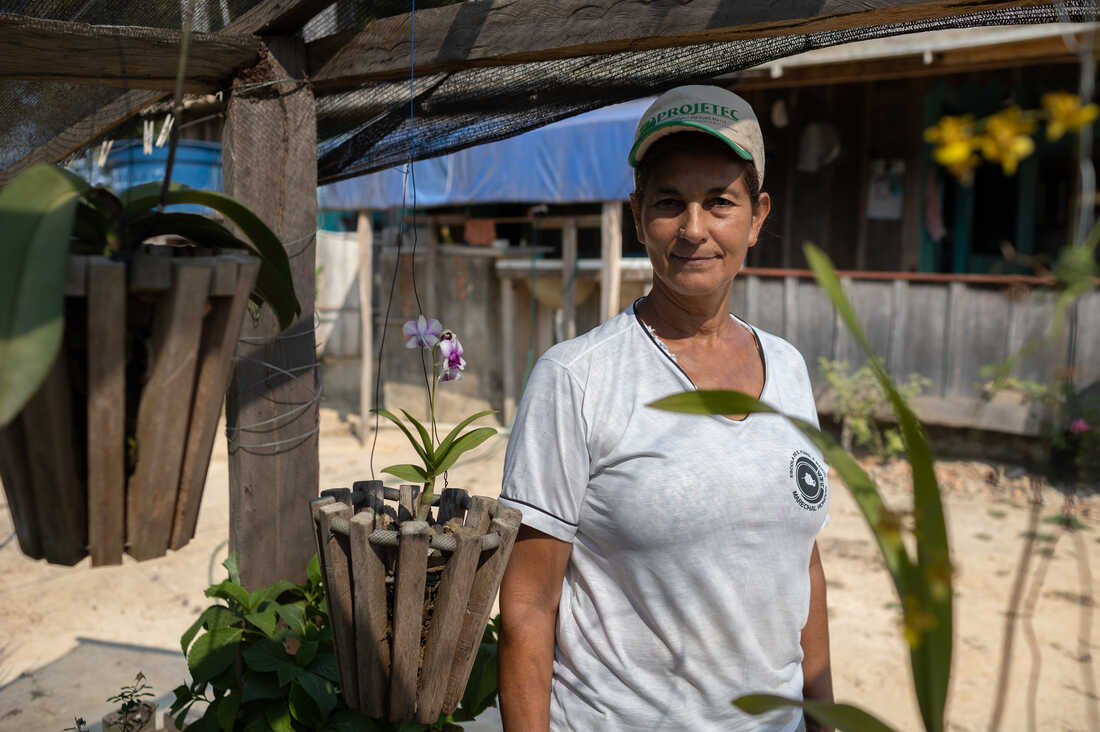 Rose Marcondes, 45, on her land off the BR-319 highway through the Brazilian Amazon on Monday. Bruno Kelly for NPR hide caption

“The real problem is the big landowners,” she says. “They burn more jungle in one year than we burn in a lifetime.”

In recent decades, Brazilian governments at least tried — if not always successfully — to preserve the jungle and rein in deforestation. But Bolsonaro, a former army captain who has ironically referred to himself as “Captain Chainsaw,” views the Amazon as a source of jobs and economic growth and has encouraged people to settle there.

Eduardo Taveira, the top environmental official for Amazonas state, which includes most of the Brazilian rainforest, says one goal is to create badly needed jobs. In the Amazon, he tells NPR, “more than 50% of all the population lives below the poverty line. So it’s not just environmental issues” that need to be addressed.

Bolsonaro is also backing several draft bills in Congress that would give property titles to Amazon land invaders, allow mining on Indigenous lands and make it easier to secure environmental licenses for mining and large-scale farming in the Amazon. 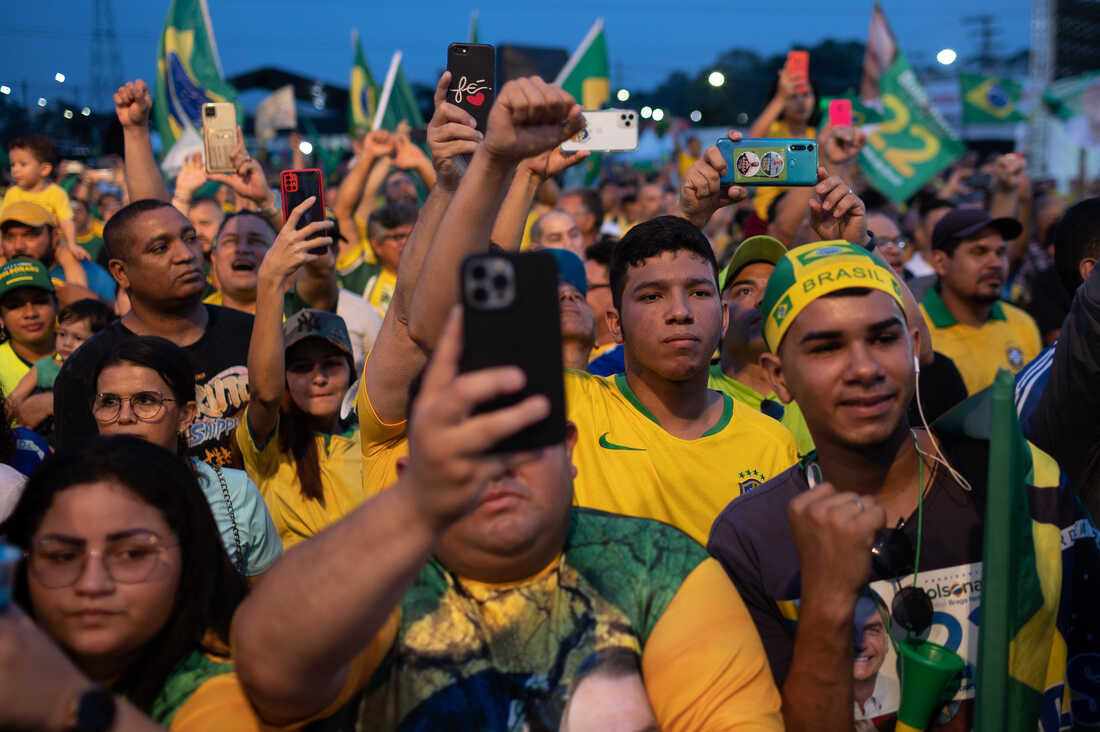 Supporters of Brazilian President Jair Bolsonaro attend a campaign rally for his reelection in Manaus on Sept. 22. Bruno Kelly for NPR hide caption

Partly as a result, Bolsonaro appears to have broad support in the region. Nearly all of the Amazon farmers and residents who speak to NPR say they plan to vote for the president on Sunday. Numerous cargo trucks on the jungle highway are festooned with Bolsonaro campaign propaganda.

But Nilda Castro, who has lived in the Amazon for 46 years and now runs a small riverside hotel for tourists, says Bolsonaro’s legacy is one of destruction.

“In the past we didn’t used to see such huge fires,” she says. “There’s nobody here enforcing environmental laws.” 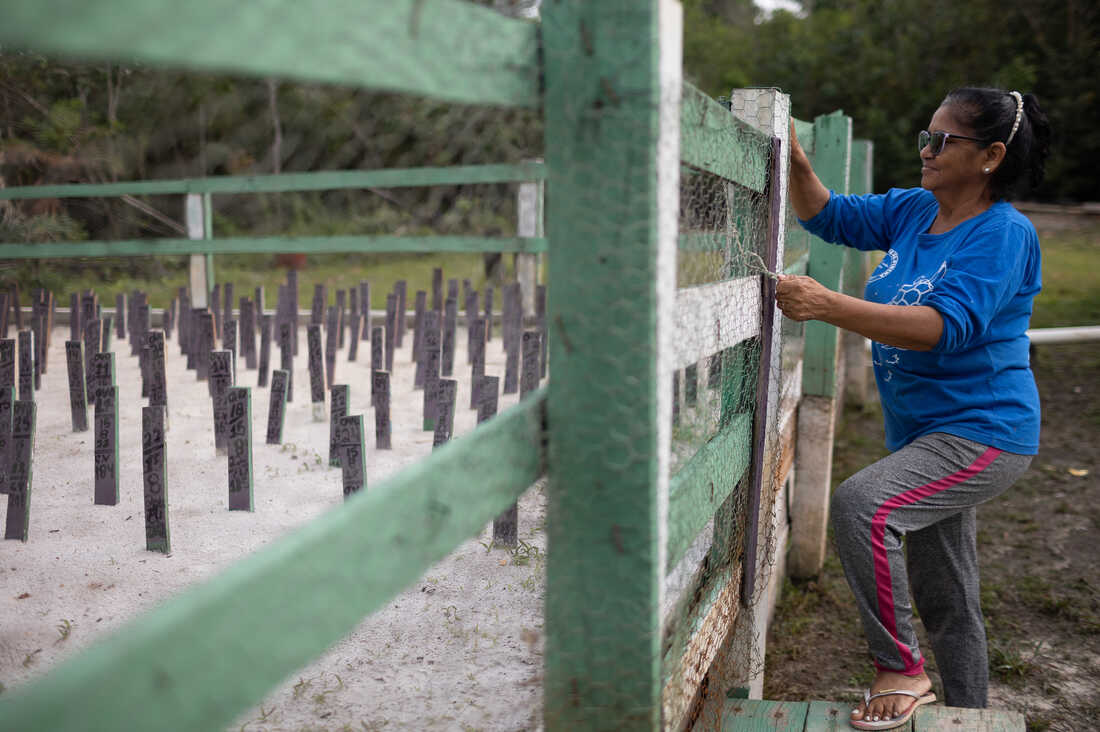 Nilda Castro dos Santos, a 64-year-old farmer and owner of the small hotel Dona Mocionha, next to a turtle hatchery she helps manage in the community of São Sebastião, on the BR-319 highway through the Brazilian Amazon, on Tuesday. The community is crossed by the Igapó-AçuRiver and has a ferry for vehicles and pedestrians. Bruno Kelly for NPR hide caption

Castro is pinning her hopes on Sunday’s election. Most polls show Bolsonaro — a climate-change skeptic who once accused environmental groups of setting fire to the Amazon to embarrass his government — trailing front-runner Luiz Inácio Lula da Silva by double digits. Da Silva is a former two-term president who has pledged to preserve the Amazon.

Speaking to foreign correspondents in August, da Silva vowed to create a ministry for Indigenous peoples, clamp down on illegal gold miners who have invaded Indigenous lands under Bolsonaro and rebuild Brazil’s main environmental protection agency, known as Ibama. 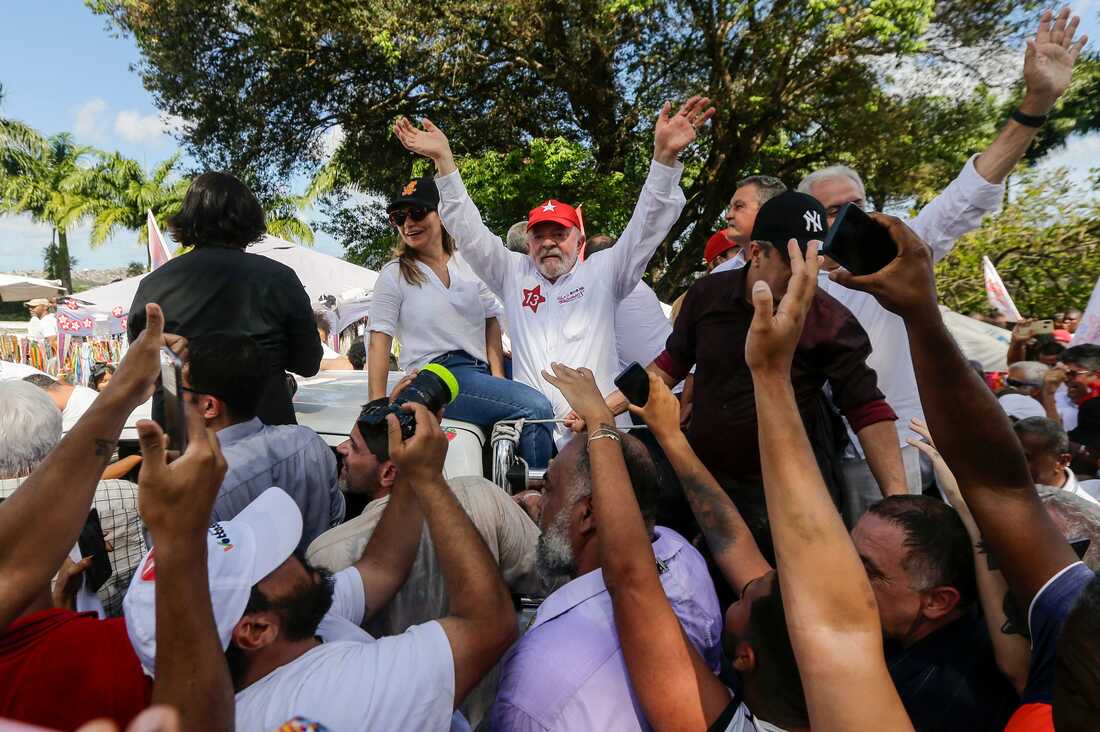 If he returns to the presidency, da Silva said, the global climate crisis would be “an absolute priority.”

Meanwhile, during four days in the jungle, the only people NPR came across trying to stop deforestation was a squad of firefighters in the town of Humaitá. Like police officers, they carry pistols because they often encounter resistance from well-armed landowners intent on clearing the jungle and keeping their fires going. 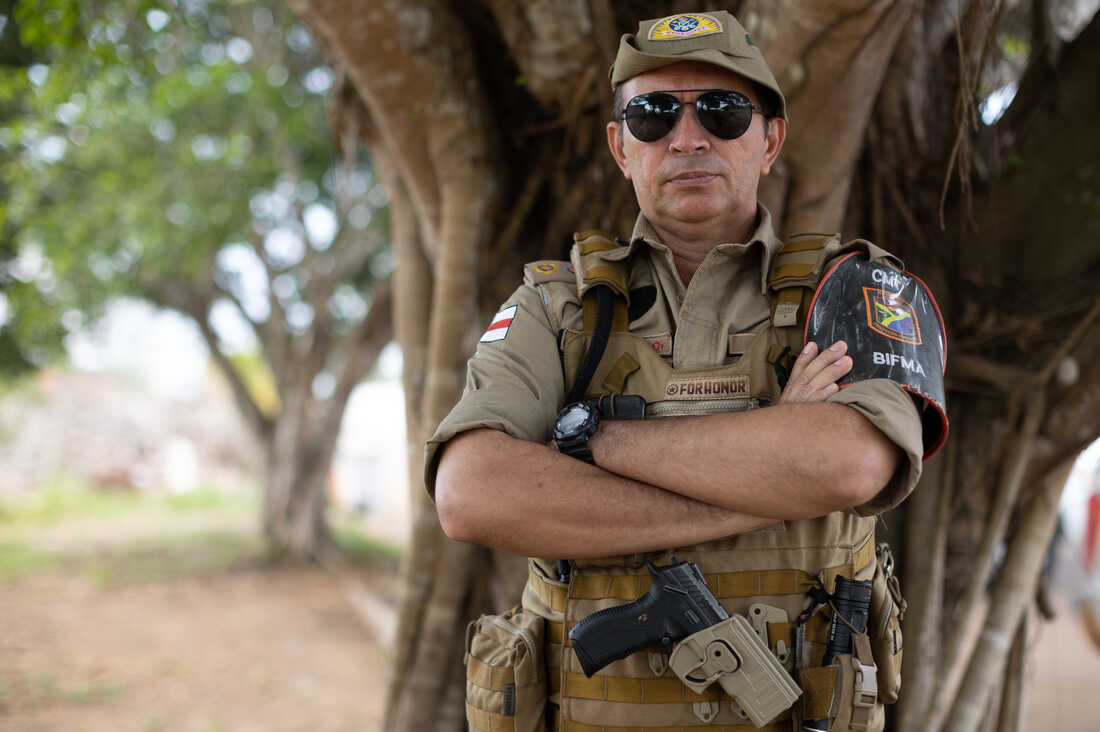 Fire chief Joao Filho at a temporary fire station in Humaita, off the BR 319 highway, on Monday. Bruno Kelly for NPR hide caption

The squad includes 22 full-timers and 20 volunteers tasked with covering a huge stretch of jungle. Because they’re so short-handed, they focus on fires that threaten houses and villages while many of the others are left to burn out on their own. The worst part of the job, says volunteer Pablo Carvalho, is coming across so many dead birds, snakes and other critters.

Fire chief João Filho admits that it’s frustrating that so many jungle arsonists get off scot-free. He can’t dwell on it, however, because he’s too busy trying to save whatever patches of jungle he can.

“We put out one fire but then the ashes from that fire drift down and start another fire,” he says. “It never ends.” 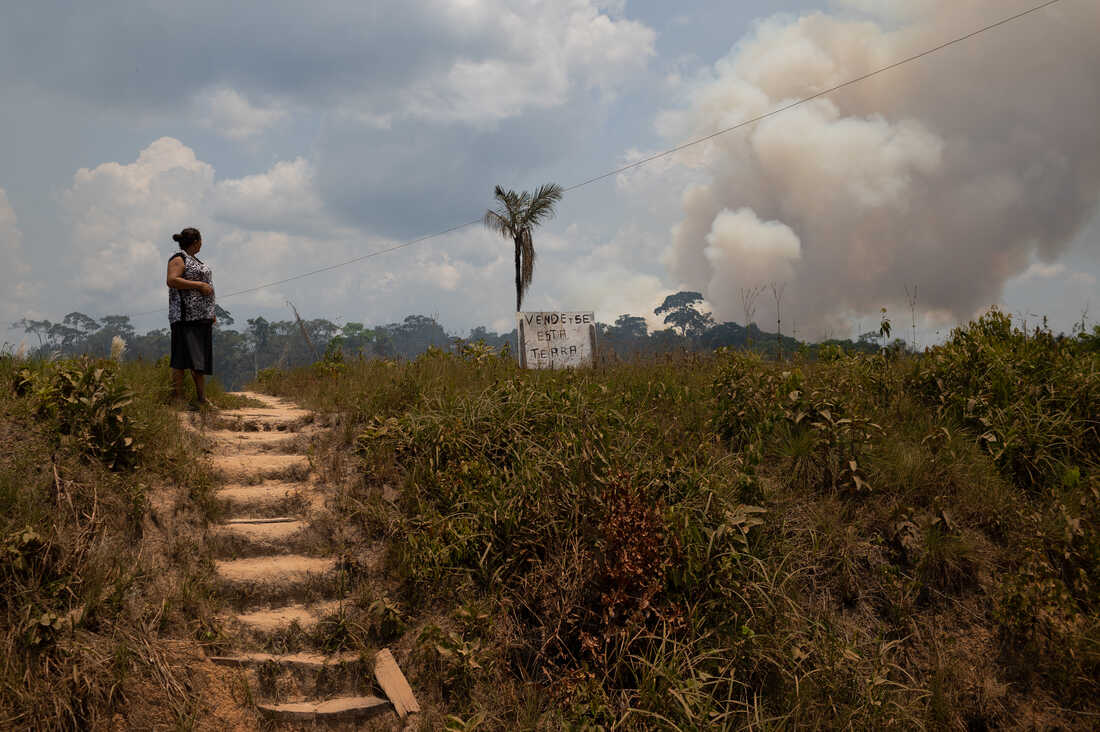 A woman observes a massive fire in the Amazon rainforest near the BR 319 highway on Tuesday. Bruno Kelly for NPR hide caption

Utah knew its reward for its Pac-12 championship game win over USC was a trip to the Rose Bowl. The College Football Playoff selection committee revealed its final rankings Sunday and confirmed the No. 8 Utes (10-3) will face No. 11 Penn State (10-2) in Pasadena. The Utes closed ...

When Lauren Nicks, a senior at Spelman College in Atlanta, cast her vote in last month’s midterms, she did so in her home state of New York. Nicks, a 21-year-old international studies major at the historically black college, had been told months earlier by fellow students about a law that ...

DEAL OF THE DAY: Amazon has slashed price of Breville coffee machine - shoppers save £72