Gary Neville has furiously hit out at news the Glazer family are considering selling a stake in Manchester United to US investment fund Apollo.

Taking to Twitter early on Friday, Old Trafford hero Neville wrote: ‘If the reports are true that the Glazer Family are ready to part sell ahead of a full sale it’s totally unacceptable that this is to a US investment fund.

‘Apollo have been mentioned but they need to know they will not be welcomed in Manchester.’ 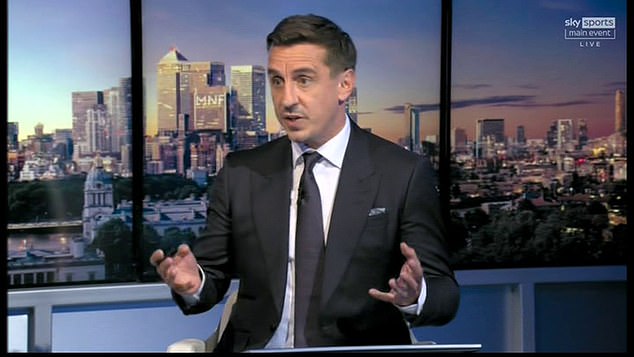 Sportsmail exclusively revealed on this week that New York-based private equity group Apollo were in discussions with the Glazer family about taking a minority stake in United.

Talks between the Glazers and the US firm are focused on how much money the family will get for their shares, with no immediate plans for fresh money to be pumped into the club.

The news will come as a blow to long-suffering fans hoping new investors might inject much-needed funds to revamp Old Trafford and the Carrington training ground, or provide a bigger transfer kitty.

Negotiations with Apollo are centred on how much four Glazer family members —Kevin, Bryan, Darcie and Edward Glazer — are willing to accept for their shares.

They want out, unlike their brothers, Joel and Avram Glazer, who have no intention of giving up overall ownership or day-to-day control of United.

The six siblings each own an equal number of shares in United and, crucially, they control 97 per cent of the voting equity between them. Some shares are also traded on the New York Stock Exchange but they have heavily diluted voting rights.

British billionaire Sir Jim Ratcliffe has also expressed his interest in mounting a takeover, fuelling hopes among United supporters that the club’s despised American owners may finally decide to sell up.

It has given fresh impetus to anti-Glazer protests that will take place before Monday’s game against Liverpool amid tight security around Old Trafford. The same fixture was postponed last year following angry demonstrations.

On Thursday, a fans’ group dedicated to targeting United’s sponsors and damaging the Glazers’ revenue streams wrote to Apollo threatening to tarnish the company’s reputation if it did not walk away from the talks.

Mankind's giant leap as never seen before: 35,000 photographs from Nasa's original Apollo moon missions are unlocked from the freezer for the first time in fifty years and restored pixel by pixel to reveal real out-of-this world images of life in space

Bright Eyes at the Hammersmith Apollo review: a stonking return, despite a gentle wobbling

What does Artemis mean? Meaning of Nasa moon launch name explained and the Greek goddess’s link to Apollo

Artemis 1, NASA's first mission to the Moon since Apollo, set to take off tonight

Glenn's legacy of testing spacecraft spans from Apollo to Artemis

Engadget The may have only arrived yesterday but developers are already dreaming up fun and interesting use cases for Apple’s new . Take creator Christian Selig, for instance. On Friday, he updated his Reddit client to implement support for “Pixel Pals.” The feature adds a critter that does cute ...

The 15-year-old left his home in Croydon on August 24 and travelled to the Scottish city.

Popular Reddit app Apollo was today updated with support for the iPhone 14 Pro and Pro Max, and Apollo developer Christian Selig decided to implement a fun little feature — a “tamagotchi” for the Dynamic Island. The app update adds a small little creature into the area above the Dynamic ...

Veo Introduces The Apollo, An Urban Two-Seater Electric Bike The Chicago-based company has efficient micromobility in mind. Apart from actually buying your own e-bike, e-scooter, or any other LEV, you may have already tried using one of these urban mobility devices from a rideshare company such as Lime or ...

Apollo Pro wants to be ‘the Cybertruck of scooters’

The folks at Apollo aren’t messing around when they say they aren’t cutting any corners in creating their new Apollo Pro scooter. The new electric scooter has all the bells and whistles. The $3,600 Pro will stand at the peak of the company’s current lineup of scooters, ranging from ...


View more: Apollo Pro wants to be ‘the Cybertruck of scooters’

A popular mobile app is bringing access to Reddit to the iPhone Lock Screen with iOS 16. The new version of the Apollo for Reddit iOS app has embraced the iOS 16 feature that allows third-party developers to build custom widgets that can appear on the phone’s Lock Screen, offering ...

Queen Elizabeth's message to the Apollo 11 crew is etched on silicon disc left on the lunar surface: Praised mission as a 'salute to the skill and courage' of Neil Armstrong and other astronauts

Upstart Crow at the Apollo Theatre review: David Mitchell is the draw in this hectic sitcom spin-off

Apollo’s Alpha: Gone in 15 seconds – presale for ‘hot, niche project’ prePO sells out in a flash

Artemis vs. Apollo: See How the Technology of NASA's Missions To The Moon Compare

Q1 may be a blip for Apollo Hospitals; analysts see 25% upside

Video: EXCLUSIVE: Manchester United's American suitors Apollo are accused of financial connections to Vladimir Putin's $10bn sovereign wealth fund, as an MP warns against 'getting into bed with' Russia-linked firm

Video: EXCLUSIVE: Manchester United's American suitors Apollo linked to the Kremlin, as club are warned against 'getting into bed' with private equity

Apollo astronaut’s mobile has 800,000 times the memory of ship that got him to moon

Video: REVEALED: Talks between the Glazers and Apollo are focused on how much money the family will get for their Manchester United shares and NOT over any further investment in the club… dashing fans' hopes of a cash influx

Manchester United share price rockets by 15% on New York Stock Exchange amid talk of a Jim Ratcliffe takeover or investment from Apollo... earning the Glazer family a reported $240MILLION since last week

EXCLUSIVE: Crystal Palace co-owner Josh Harris is involved with the American private equity firm Apollo, which is in exclusive talks to buy a stake in Manchester United

'You are NOT welcome in Manchester' United fan group warn potential US equity firm Apollo off buying shares in the club, detailing their links to disgraced sex offender Jeffrey Epstein

EXCLUSIVE: Glazers are in exclusive talks to sell a minority stake in Manchester United to American private equity firm Apollo, with some family members wanting OUT of the club amid fan backlash… but Joel and Avram are STAYING in charge