The 25-year-old has been linked with Newcastle this summer. 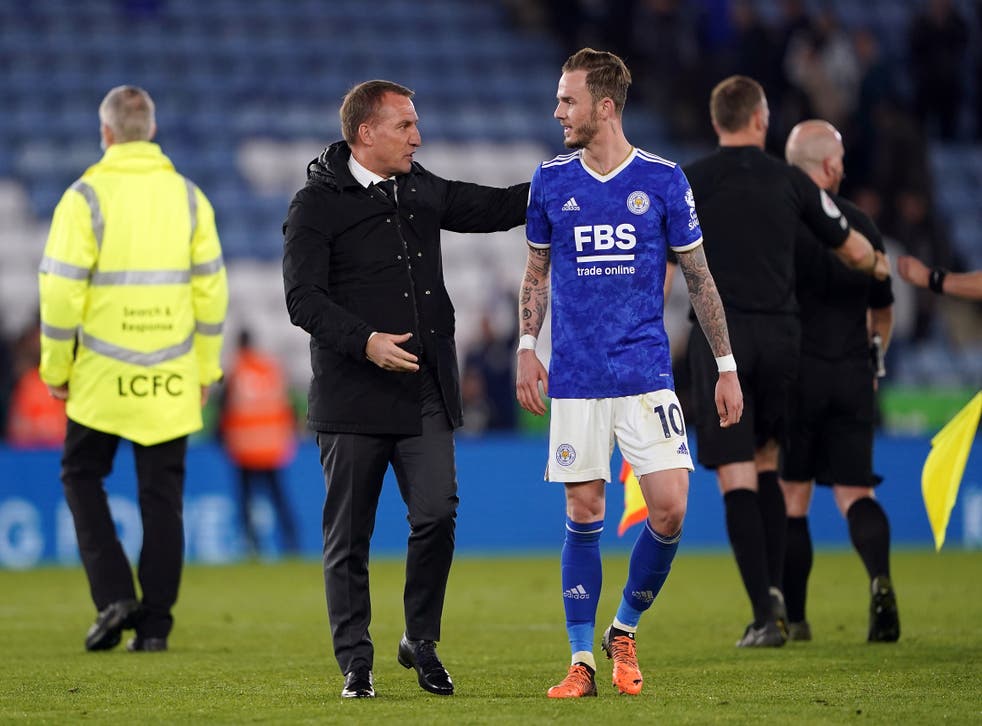 The 25-year-old playmaker has two years left on his current deal but has attracted interest this summer from Newcastle, who failed to prise him away in a £40million bid.

Maddison is one of the Foxes’ star players and the club are keen to avoid him entering the final year of his contract next summer.

Asked whether there had been dialogue between the two parties, Rodgers said: “I believe so, I believe they’ve spoken. Yeah, Jon (Rudkin, director of football) has spoken to them a number of times, yes.

“I’m pretty sure the club would want to do that (tie him down). Both sides have to be able to find an agreement.

“With James, with two years left, naturally the club would want to protect the asset. But it works both ways.

“Sometimes, everything goes onto the club. If a player, I’m not saying James, doesn’t want to sign it, then it can be a stalemate.

“But absolutely, he’s an outstanding player and of course, Leicester City would benefit from keeping him longer.”

Maddison, who will have an eye on earning a place in England’s World Cup squad, has started the season well for the Foxes and Rodgers says there has been no change in him following the interest from Newcastle.

“He’s been brilliant. He’s a top-class player. Arsenal, in the spells, where he had the ball, he looked the most dangerous player,” he said.

“He scored a very good goal. For me, James is still the same. He’s improving, developing, and happy.

“Of course, he’s a top player at this level, so people will be interested in him, but I’ve seen no change in him whatsoever.”

Rodgers also expects Wesley Fofana to still be at the club after the transfer window shuts.

The defender has been the subject of two bids from Chelsea but both were rejected and nothing fresh has arrived in the last 10 days.

Rodgers has insisted all along that Fofana is not for sale and does not expect to lose him in the next fortnight.

“I don’t think so far ahead, the idea is that he is a Leicester City player, ” he said.

“He is not for sale, the club have made that clear, unless anything changes on that I would expect him to be here.

“Currently at this moment there is nothing new and nothing has changed from when we last spoke.”

There were reports the 21-year-old had asked Leicester to accept a lower fee while Rodgers has denied the player handed in a transfer request.

Asked to clear up the speculation, the boss added: “Yes, I can, he hasn’t. He’s a great kid. He’s loved by his team-mates.

“We’ve spoken numbers of times about the whole situation and of course a private conversation. Our communication is normal, and we just continue to prepare for the games.

“It’s a challenge for any player and for clubs around this time when the window is open, and there’s lots of speculation and lots of noise that goes on with it, and especially for a young player – 21 – all the speculation that has surrounded it.

“That’s why we’re here, to help and educate him in dealing with all these rumours. The focus is very much on the team and getting them ready for the weekend.”


View more: Video: Ben Affleck and Jennifer Garner are friendly exes as they both stop by their son Samuel's school in Los Angeles

Katie Price has dodged £254,000 of bills by handing over just £21,000 to her creditors. The former glamour model, 44, owed £234,000 in tax and £20,000 to business creditors of her Jordan Trading Company. But now accountants have now finished liquidating the failed firm and this week revealed that they ...

Dr Teresa Irwin is a US-based 'vaginacologist' who specializes in female pelvic dysfunctions and regularly shares educational videos on TikTok She says that many of her patients' health issues are linked to a lack of knowledge and education about their own bodies As a result, Dr Irwin wants to share more information with her followers - including the ups and downs of what really happens during labor and birth The mom-of-three revealed she had to break her own waters during the birth of her second child, because a doctor refused to, insisting it should be 'natural'When her third baby was born, his head was so big that Dr Irwin snapped her tailbone during the birth and was told she had to rest for six weeks afterwards


View more: Pelvic health doctor opens up about her harrowing birth experiences - revealing she had to break her OWN waters and SNAPPED her tailbone during labor - as stark warning to other women about realities of childbirth

CCTV footage has been released after a body was found in the River Cherwell last summer. Thames Valley Police says it is keen to speak to an individual who it believes may have witness information. Officers were called at around 12.15pm on Monday, July 26, 2021, to a report of ...

The departure of beleaguered Royal Navy aircraft carrier HMS Prince of Wales to head for repairs has been delayed again after the £3 billion warship suffered a further technical problem. The Nato flagship broke down off the Isle of Wight in August after sailing from Portsmouth Naval Base to take ...

Manchester United boss Erik ten Hag has opted to keep his squad in Cyprus for warm-weather training before flying back to face Everton. The Red Devils survived a scare to defeat Omonia Nicosia in their third game of this year’s Europa League group stage. Normally following a European trip, United ...