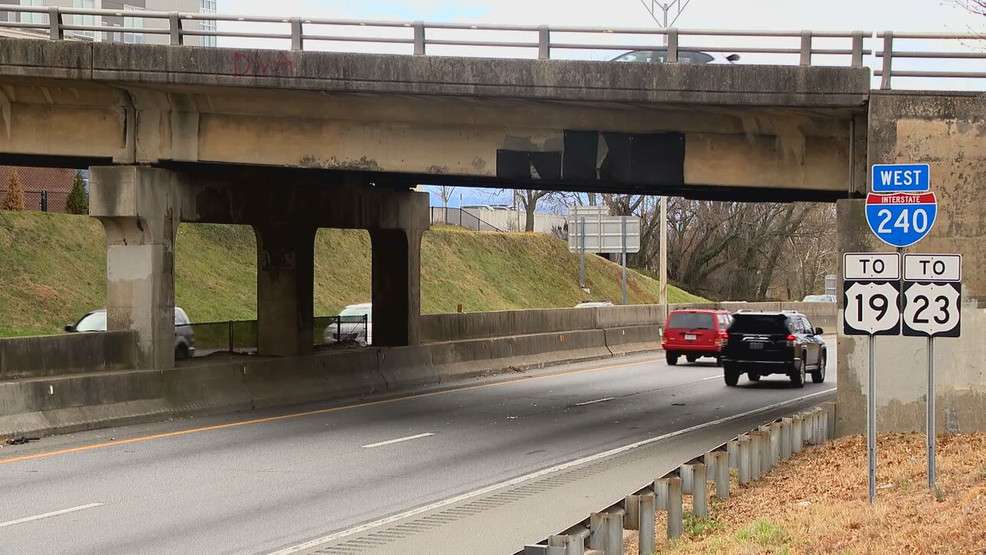 “When I saw it on the news this morning, I was already thinking of how I was going to go so I could avoid it because there are ways to avoid it,” Linda Woodmansee, Montford neighborhood resident.

Residents and commuters alike are making plans to detour their regular drive plans to accommodate repair work that will take months. Starting Monday, Nov. 28, repair work to fix the damage done to the beams under the bridge will begin on the Montford Avenue bridge over I-240. The beams were damaged when a truck’s lift arm passed underneath the bridge and slammed into all six of the beams.

Officials say the work will likely cause added congestion on the roads around the Montford neighborhood through March of 2023.

Contractors are limited to working at night, between 7 p.m. and 6 a.m.

“If you’re at the other end of Montford, it’ll have more of an effect because I don’t think there are a lot of alternate routes, but from here we can kind of go around it,” says resident Sandy Friedlander.

In a statement NCDOT says, in part, “..this work will affect traffic both on the interstate and on Montford Avenue through March 2023. We ask everyone to stay alert and follow posted detours so each worker can go home to his or her family at the end of each shift. “

Detours have been outlined by the NCDOT for the duration of the bridge work.

During construction hours, all I-240 West traffic will be directed to take the Montford Avenue exit (Exit 4C), cross directly over Montford Road, then take the I-240 West on-ramp to rejoin the interstate.

Also, at night, all lanes of Montford Avenue will be closed with marked detours. All southbound drivers should plan to turn onto Chestnut Street and then right onto Broadway.

Northbound traffic may use City of Asheville streets to access I-240 West and areas north of I-240. Daytime lane closures on Montford Avenue, with similar impacts to the current traffic pattern, will be likely through the life of the contract.