The UW couldn’t hang with UCLA and suffered a sloppy first loss of the season.

Two hours before kickoff at the Rose Bowl, UCLA football players acted like they owned the place. They used the entire field for early warm-ups. They set up cones, ran through drills and didn’t look up.

They wouldn’t budge even when University of Washington quarterback Michael Penix Jr. and his teammates came out to get loose, leaving them barely a corner of an end zone to do anything.

Not much changed on Friday night after the sun went down behind the San Gabriel Mountains and the ESPN-TV cameras came on — the storied stadium belonged to the unbeaten Bruins nearly all game long.

UCLA by far had the better secondary and used this advantage to both exploit and punish the Huskies, sending them to their first loss in five games in the Kalen DeBoer era with a 40-32 defeat.

The outcome proved as deflating as the first four games  were invigorating to the fan base. At least the Huskies made it look respectable.

“Obviously a tough loss,” DeBoer said. “We dug ourselves too big a hole.”

Bruins quarterback Dorian Thompson-Robinson went right after the UW’s largely inexperienced cornerbacks and threw a pair of first-half touchdown passes over their heads while his defensive backs twice intercepted Penix deep in Husky territory to settle this one.

This game surely was different than the others on a couple of negative fronts.

Penix got sacked for the first time all season for a 9-yard loss by former Husky Laiatu Latu, of all people.

Late in the first quarter, the Huskies finally faced the daunting task of trailing for the first time in 2022, at 9-7.

The UW was sloppy much of the way, not only continuously getting beat in coverage, but missing a lot of tackles and drawing too many penalties. The Huskies were flagged 9 times for 98 yards, 3 going to right tackle Roger Rosengarten.

In a match-up of likely the Pac-12’s two best quarterbacks, Penix ended up with big numbers, 33 completions in 48 attempts for 345 yards and 4 touchdowns, and those 2 picks. Thompson-Robinson countered by going 24 of 33 for 315 yards and 3 scores, but without giving up the ball. Penix was sacked twice, his UCLA counterpart once.

“We’ve got to do better,” Penix said. “Me, myself personally, I’ve got to take care of the ball better.”

Still, the game began promising enough for DeBoer and Company when the Huskies scored on their opening drive for the fifth consecutive game.

Penix took them 75 yards in 10 plays and found Rome Odunze wide open at the goal line for a 33-yard touchdown pass, beating Bruins cornerback Devin Kirkwood and it was 7-0 with four and a half minutes played.

Typical of this Husky team, it had to press the issue right on that first series, with Odunze scoring on a fourth-and-6 play.

The Huskies also changed things up on the offensive line, swapping positions with Troy Fautanu and Jaxson Kirkland, with Kirkland moving to guard for the first time since 2019.

“We think Jaxson can be a really, really good guard,” DeBoer said.

The first UW defensive series also turned out well, with the Huskies pulling a successful goal-line stand, stopping their hosts at the 3 by forcing three consecutive Thompson-Robinson completions. 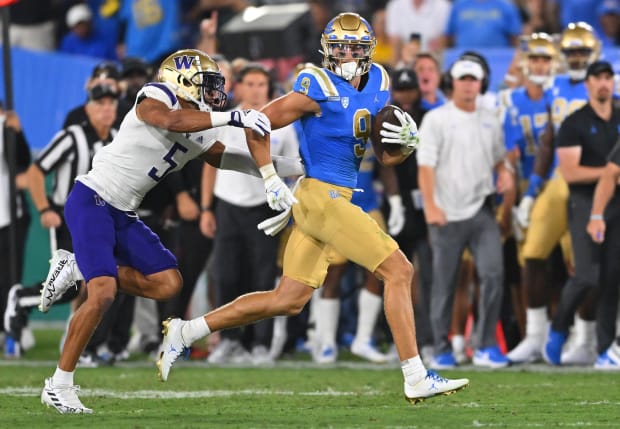 However, they got sloppy thereafter and it cost them.

On the second play near the goal line following the change of possession, running back Wayne Taulapapa dropped a Penix pitch and fell on the ball in the end zone for a safety.

UCLA then followed up with an 11-play, 93-yard drive, capped by Zach Charbonnet going over the left side for a 1-yard score standing up. The Bruins led 9-7 with 2:54 left in the opening quarter and the UW trailed for the first time since DeBoer took over.

Into the second quarter, the Huskies reclaimed the lead 10-9 when Peyton Henry converted a career-best 50-yard field goal, with the ball hitting the crossbar but crazily bouncing through.

It was all Bruins for the rest of the half. They wouldn’t share the field anymore. They took advantage of the UW’s generosity to reclaim the lead on Thompson’s 12-yard touchdown pass to Jake Bobo, beating Husky safety Alex Cook, which was good for a 16-10 advantage that stood up.

“It’s a team that’s hurting in the locker room,” DeBoer said. “They expect to win.”

The Huskies helped this drive along by committing a pair of penalties on the same play. Defensive tackle Faatui Tuitele was called for holding and cornerback Davon Banks got charged for a late hit on Bruins tight end Michael Zeike after flipping him on the sideline, all of this moving the ball from the UCLA 48 to the Husky 12. Bobo’s scoring catch came a play following this rampant rule-breaking and DeBoer’s guys were reeling for the first time all season. 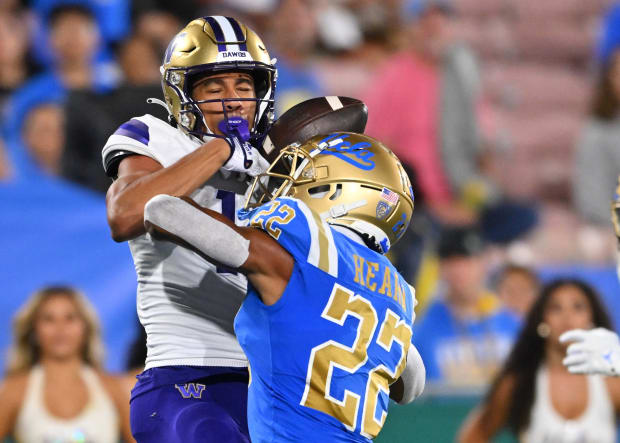 Two plays and a holding call later, Penix threw an interception right to Bruins safety Stephan Blaylock, who returned it 27 yards to the UW 15. UCLA scored on the next play when Thompson-Robinson hit wide receiver Kam Brown for a touchdown in the left corner of the end zone, badly beating Banks for a 23-10 lead.

“Just bad, bad eyes,” Penix said of the interceptions. “I’ve got to move on with my progressions. I’ve got to be smarter with the ball.

Each team emerged from the break ready to score practically at will. The Huskies found the end zone all three times it had the ball in the second half.

The Bruins moved 75 yards for Thompson-Robinson’s 1-yard scoring run, with the wily quarterback completely faking out a pair of Huskies, edge rusher Bralen Trice and cornerback Jaivion Green at the goal line and waltzing past them.

Down 33-10, the Huskies at least didn’t roll over. They went 75 yards on 13 plays spread over 5:55 for a 19-yard touchdown pass from Penix to Jalen McMillan, with the latter bouncing off a tackler over the middle and slipping to the end. A two-point conversion pass failed to make it a two-score game.

Bobo caught his second touchdown pass, a 39-yarder, beating corner Julius Irvin this time, while the Huskies responded with a 4-yard scoring toss to tight end Devin Culp. A two-point conversion run on a reverse by Ja’Lynn Polk reduced the deficit to 40-24 with 12:03 left.

The Huskies forced a punt and scored once more, on a 9-yard pass to Odunze on fourth-and-goal, and McMillan scored on the two-pointer.

All that was left was the Bruins to hang onto the football and run out the clock. UCLA won the total yardage battle, too, 499 to 416. The UW was left to try and pick up the pieces.

“We were saying just don’t worry about the scoreboard,” Penix said. “You get down at halftime, just keep playing. You’ve got to fight, all the way to the end. The game isn’t over at halftime.”

Go to si.com/college/washington to read the latest Inside the Huskies stories — as soon as they’re published.

Not all stories are posted on the fan sites.

Find Inside the Huskies on Facebook by searching: Inside Huskies/FanNation at SI.com

Agnelli has resigned | Daniele Badolato – Juventus FC/GettyImages Juventus have been rocked by the stunning resignations of their entire board, including president Andrea Agnelli and vice-president Pavel Nedved. Numerous reports in Italy claim that the entire Juventus board of directors offered their shock resignations during a shareholders meeting ...

Brazil's midfielder Casemiro scored the lone goal of the game vs. Switzerland to help his team advance to the knockout stage of the World Cup

FILE – Joseph Percoco, a former aide to New York Gov. Andrew Cuomo, arrives at federal court for his corruption trial, March 8, 2018, in New York. Percoco was convicted of accepting over $300,000 from companies seeking to influence the Cuomo administration as it worked on the Buffalo Billion ...

Wind energy is now South Dakota’s No. 1 producer of electricity, but not every day

Houston boil water notice: Put your address in and see if you're affected

'Gaslighting' is Merriam-Webster's 2022 word of the year: 'We do hope you’ll trust us'

Holiday train to make stops in North Country on Monday

“They are going to slam this judge”: Experts say appeals court will shut down Trump judge’s “circus”

Cherokees ask US to make good on promise: A seat in Congress

Kim Kardashian 're-evaluating' her relationship with Balenciaga amid ad scandal