Morgan has been on form all day aboard his Ciceley Motorsport BMW 330e M Sport – he was a pacesetter in the opening session before a trackrod bracket became detached from the rear frame.

Tom Ingram ended up supreme in that early running, his Excelr8 Motorsport Hyundai i30 N recording no fewer than four laps quicker than the best anyone else could manage, and ending up atop the order by 0.104 seconds.

Times came down in the later session – albeit not for Ingram – and it was Morgan who led a BMW 1-2-3.

A late improvement from Stephen Jelley hoisted his West Surrey Racing-machine into second position, 0.014s adrift of Morgan, while the second Ciceley BMW of BTCC rookie George Gamble was third.

“Coming here, we made some changes to the front end of the car and it just seems to have gelled,” said Morgan.

“Whether it’ll work everywhere I don’t know, but this is a relatively high-grip circuit. It’s always nice when you push a car out at a track and it seems to work, and this is one of those days.

“It’s given me a lot of confidence to push on, and even in FP1 when the tyres were 100km-plus old the balance was good.” 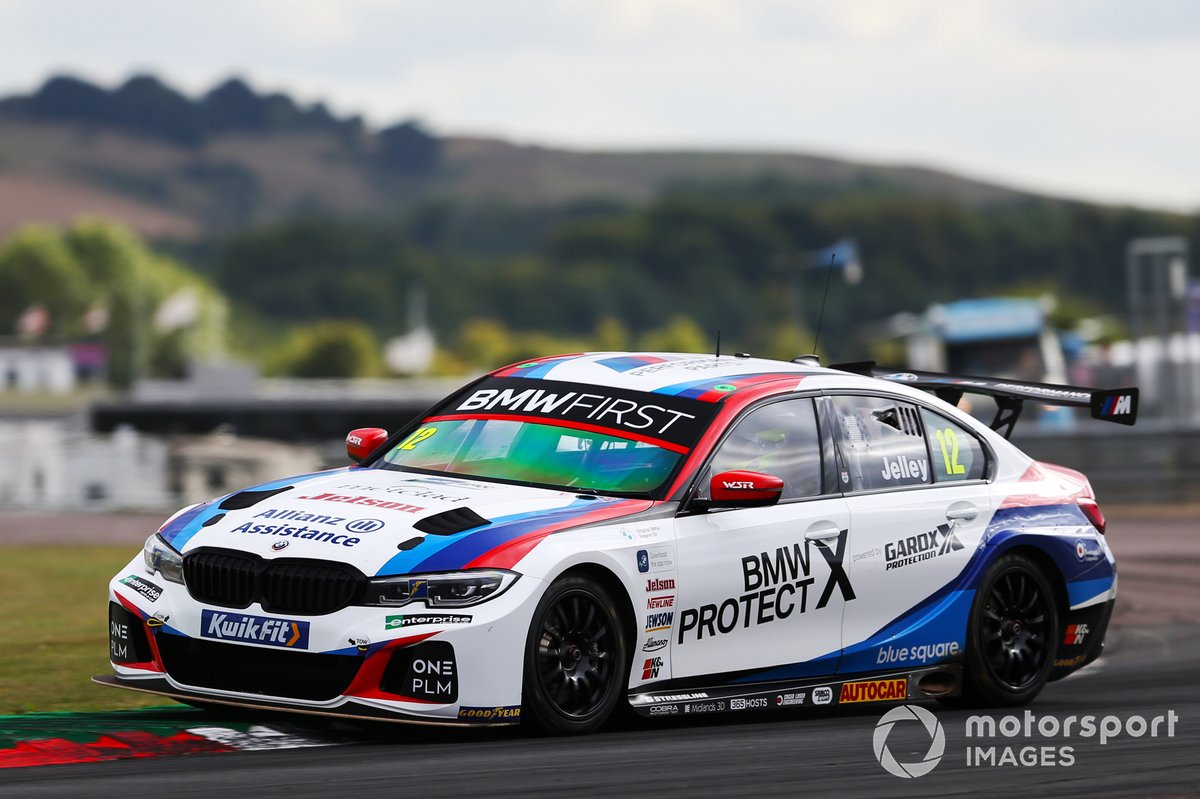 Ingram’s early-morning best was good for fourth overall across the two sessions on a circuit where he always shines, but he was down in 14th spot in the later period.

Instead, the front-wheel-drive opposition to the BMW armada became the Speedworks Motorsport Toyota Corollas, which had survived a tricky opening session.

Ricky Collard was second in that period, then fourth later on to go fifth overall. It’s been an impressive day for the BTCC rookie, but he ended the first session in a red-flag-inducing clash with Team Hard Cupra driver Will Powell on the approach to Becketts, which also caught out Dexter Patterson, who had to take his Infiniti off track to avoid the opaque cloud of tyre smoke.

Collard alighted from the Toyota and stalked straight over to the Cupra to remonstrate furiously with Powell, but continued on good form in the second session.

Team-mate Rory Butcher, meanwhile, had an altercation with Excelr8 Hyundai driver Tom Chilton in FP1, in which he was fourth, before going sixth later on to end up seventh overall.

In between the two Toyotas was the second WSR BMW of Jake Hill, with the third of the WSR squad, championship leader Colin Turkington, immediately behind in eighth overall.

Apart from Turkington, Hill and Ingram, the other member of the main title-contending quartet, Ash Sutton, was a lowly 18th in FP1 in his Motorbase Performance-run Ford Focus, and slipped even further to 23rd later on.

These favored stocks are down by more than 20% and are poised to pop soon, says Morgan Stanley

'When a player has so much EGO, I don't get it': John Obi Mikel slams Cristiano Ronaldo over his Piers Morgan interview and Manchester United exit - and says 'that's why I always go for Messi'

BMW rounds off 50th anniversary year for M with sensational reboot of 3.0 CSL

BMW is rounding off the 50th anniversary year of its M racing and performance brand with a stunning reboot of the iconic 3.0 CSL (coupe, sport, lightweight) from the 1970s. It’s been flirting with this idea since 2015, when it revealed the 3.0 CSL Hommage R concept car, but there’s ...

Morgane Metraux looks to end LET season on a high

Morgane Metraux. LET By GolfDigetME.com LET winner Morgane Metraux holds a two-shot lead with one round left to go at the Andalucía Costa del Sol Open de España at Alferini Golf. The 25-year-old began the day a few shots off the lead and fired a round of 67 to ...

The UK's most and least reliable cars for MOT tests including Vauxhall, BMW, Tesla & more

Two Teens, 13 and 16 Years Old, Shot While Sitting Inside Car in Morgan Park

'You're talking about one of the best players in history': Casemiro insists Cristiano Ronaldo's bitter Man United exit is a 'sad' moment for the club... but the Brazil star is yet to speak with former team-mate following his tell-all Piers Morgan interview

BMW M5 CS Gets Even More Power From Manhart, Tuned To Nearly 800 HP

BMW doubles down on EV and battery production investment

Iconic collector cars on auction in Joburg next week – Photos

6-speed manual only, the BMW 3.0 CSL is more than just an M4 with a better grille

Round of Appaws! 'Crowd-pleasing' French bulldog named Winston - who is co-owned by NFL player Morgan Fox and his family - wins top title at National Dog Show