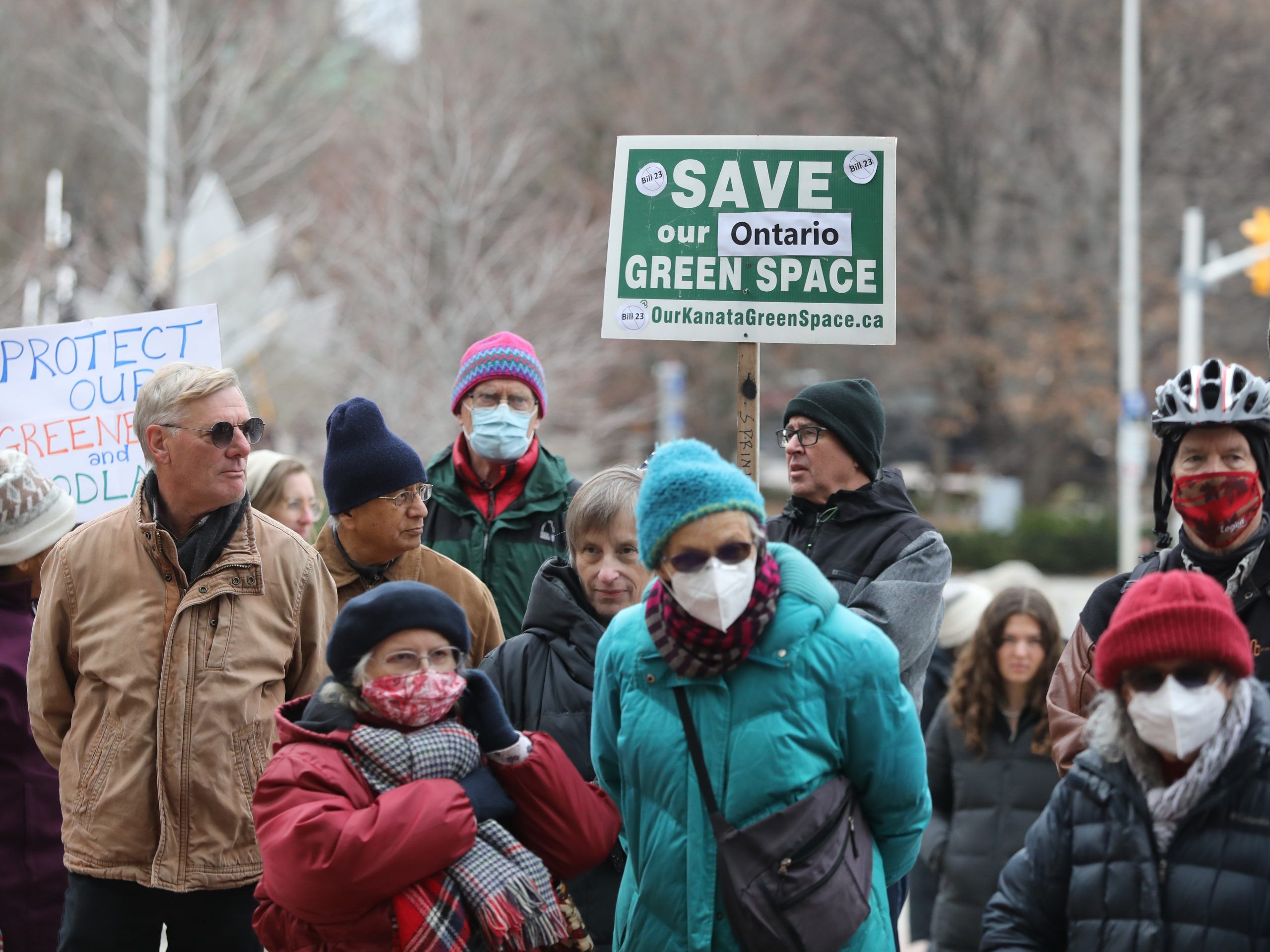 Protesters showed up for an anti Bill-23 rally at Ottawa city hall Nov. 15, the day the new council was sworn in.

On Nov. 15, Ottawa, like municipalities across the province, inaugurated a new city council. Citizens had spoken, electing a new mayor and many new councillors charged with solving municipal problems and providing the services expected of a world-class city. Everyone would agree, there is a lot to do.

While the new council mingled over lunch and a reception inside, I was part of a rally taking place outside in the clear, cool air. It was an unusual rally, with a focus rarely seen on the steps of city hall. Instead of protesting municipal policies, people were there to show their support for the new administration and concern over the double whammy it had just received from the Ontario government.

Earlier in the month, Queen’s Park had overruled several key decisions in the City of Ottawa Official Plan, undoing years of detailed planning for growth of the city and fractious compromises on density, urban sprawl, and efforts to make the most of the struggling public transit system. City staff and politicians were gobsmacked by a 50-per-cent increase in expansion lands they don’t want or need to meet population projections, and that impose difficult infrastructure challenges. Other Ontario cities suffered similar setbacks.

New mayors and councils across the province might be asking themselves, what is the point of local government if the Conservative provincial government is set on ruling from the centre? New Ottawa Mayor Mark Sutcliffe might also ask what Premier Doug Ford intended when his government passed legislation to enable “strong mayors” in Toronto, Ottawa and possibly elsewhere in the province, following it up with a “minority-rule” plan.

At virtually the same time, the Conservative government introduced Bill 23 , omnibus legislation that takes a chainsaw through everything from municipal finances to protections for renters, green building standards, affordable housing guidelines, heritage review, parkland dedication and other policies that have little to do with the constraints on housing supply that the bill is meant to address. The threat to wetlands that protect all Ontarians from flooding and biodiversity decline is unprecedented, and dangerous.

The provincial government overplayed its hand with Bill 23, raising the ire of a remarkably wide range of organizations: farmer associations, alliances of homelessness advocates, neighbourhood associations, urban planners, and all the environmental groups you can think of. You really have to ask: What is the government thinking? I can’t help but conclude that the Conservatives are wildly and blindly following the wish-list of a handful of corporations in Ontario built around the housing industry.

A line has been crossed, not only for informed citizens but perhaps also for mayors and councils of Ontario’s large and medium-sized cities. They have just had their legs cut out from under them. Bill 23 slashes as much as $26 million a year in development charges the City of Ottawa sorely needs in order to put necessary infrastructure in place. To address the gap, taxes will have to go far beyond the 2.5 per cent Ottawa’s new mayor committed to during the election campaign, along with more user fees, less transit, more homelessness, fewer services, fewer affordable rental housing units, smaller and fewer parks, and deeply compromised wetlands.

Only a few weeks ago, we saw the provincial government back down from its planned use of the notwithstanding clause of the Canadian Constitution, aimed at busting unions for legal strike action.

Maybe this time the picketers at Queen’s Park will be led by the mayors and councillors of Ontario, bused in by the Association of Municipalities of Ontario from across the province, standing against Bill 23 with the people that elected them. Or perhaps the threat of a mass resignation by newly elected officials would get the attention of the premier. Given the power of a majority government still at the beginning of a mandate, only a collective stand from municipal officials can force a pause and rethink. If the Bill’s consultation period is not extended in a meaningful way, and predictably awful provisions are not withdrawn, what is the point of local government?

Daniel Buckles is co-founder of the People’s Official Plan, an alliance of environmental, community and social justice organizations in Ottawa.