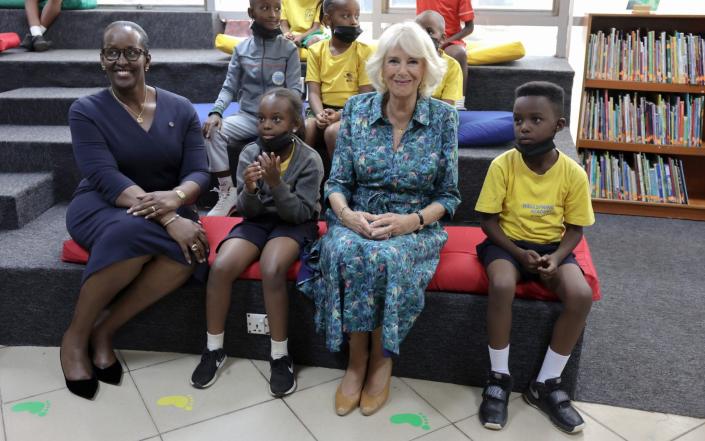 The Duchess of Cornwall today echoed a speech given by the Queen 75 years ago as she appealed to the Commonwealth to use its “power” to end gender-based violence.

The Duchess, addressing a violence against women event in Kigali, Rwanda, said the Commonwealth heads of government gathering in the East African country had “one purpose – to find solutions”.

In one of her strongest speeches to date on the subject, she said that each one of us “must take personal responsibility not to let this opportunity be lost.”

The Duchess called upon delegates to take inspiration from the Queen’s “words, her example and her deep love for the Commonwealth” as she quoted a speech delivered by the then Princess Elizabeth on her 21st birthday in 1947:

“If we all go forward together with an unwavering faith, a high courage, and a quiet heart, we shall be able to make of this ancient commonwealth, which we all love so dearly, an even grander thing – more free, more prosperous, more happy and a more powerful influence for good in the world,” she said.

The Duchess said it was “surely significant” that every member state has signed up for the “Commonwealth says NO MORE” campaign against domestic violence as she urged action over words. 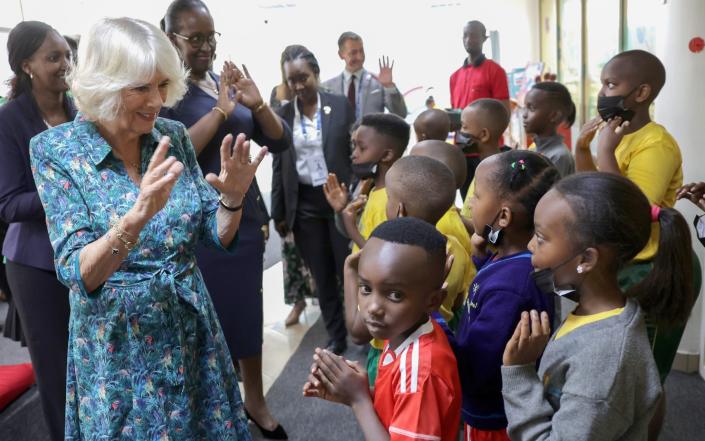 She added: “We are seeking rights not favours.”

“There is power in this alliance. In the strength of our unity, we, the women and men of the Commonwealth stand with victims and survivors, who, despite the temptation to hide away in silence, speak up so that others know they aren’t alone – whether in Africa, Asia, Europe, the Pacific opr the Caribbean and Americas.

Carrie Johnson, who arrived in Kigali this morning with the Prime Minister, joined the Duchess at the event. 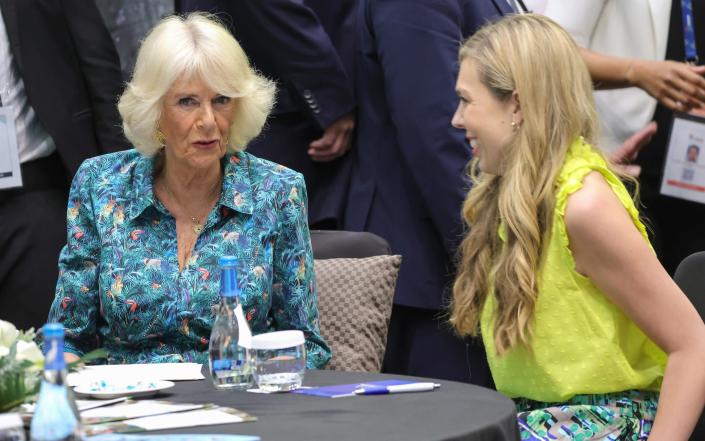 Mrs Johnson has long supported her work on gender-based violence and was in the audience when the Duchess spoke on the subject in London last November.

The future Queen consort has vowed to keep campaigning against domestic violence for “a lifetime”. Earlier this year, after the Queen cemented her future title with a ringing personal endorsement, the Duchess acknowledged it had already elevated her platform.

She has worked alongside Diana Parkes, whose daughter Joanna Simpson was killed by her husband in 2010, while their two children were in the house and has called for a “culture change” in the way violence against women is tackled.

Last year, she delivered a powerful speech in which she asked: “How many more women must be harassed, raped or murdered before we truly unite to forge a violence-free world.”

Today, the Duchess noted that calls to domestic violence helplines across the Commonwealth had increased by up to 500 per cent, and that globally, nearly one in three women have been abused in their lifetime. She described the figures as “shocking”.

She referred to her visit, alongside the Prince of Wales, to the Kigali Genocide Memorial and the message she had taken away, that we all have a personal responsibility to fight discrimination and ideologies that cause such destruction to others.

It was in that “same spirit of encouraging personal responsibility” that she spoke today, she said.

Mets’ Dominic Smith ‘back comfortable’ at plate after stance change

Gerrit Cole gets nostalgic in return to Pittsburgh, where his MLB career began

‘Thor: Love And Thunder’ Gets Ready To Rumble With $300M WW Opening

Turkish police used teargas and pepper spray to halt an LGBTQ+ Pride march in the capital Ankara on Tuesday, detaining at least 36 people after authorities banned such marches in cities across the country for security reasons.Reuters journalists saw police pepper-spraying activists and dragging them across the ground before handcuffing ...

‘It sucks’: New Yorkers face return of alternate side parking after 2-year hiatus

Morningside Heights residents kvetched about the full-time return of alternate side parking this week as New York City returned to twice-a-week street sweeping following a two-year pandemic hiatus. “It sucks man,” said Ricardo Sinclair, 43, an electrician who commutes to Manhattan from Poughkeepsie. “During the pandemic, it was good ...

Contreras (hamstring) out of Cubs lineup, day-to-day originally appeared on NBC Sports Chicago Willson Contreras was not in the Cubs’ starting lineup Tuesday against the Brewers and is considered day-to-day with left hamstring tightness, according to manager David Ross. Contreras, who got treatment on the hamstring before Tuesday’s game, ...

Wanted male, 36-year-old Allan Sanderson has been arrested in relation to a serious incident from June 19, 2022. Sanderson was originally charged with obstruction and unauthorized possession of a firearm in a vehicle after RCMP issued a public safety alert due to two men in the area of La Ronge ...

The chairman of a Manhattan community board is facing demands for his removal after calling a local district leader a misogynistic slur during an election night party last week, the Daily News has learned. Jeffrey LeFrancois, the chair of Community Board 4, which spans a section of Manhattan’s West Side, ...

Jonathan Palmer is building an EV-friendly track and calls it “a new project for a new world”. Motorsport entrepreneur and former Formula 1 star Jonathan Palmer has unveiled plans to open the world’s first self-sufficient eco driving and race circuit on a 1300-acre former air force base. The site, ...

The Renault 5 Diamant is an all-electric recreation, featuring a horsehair dash and marble steering wheel. In 1972 we first laid eyes on the Renault 5 and it went on to be an incredible success, with over five million examples of the first generation model finding homes. To celebrate ...

Dominic Smith has gone back to his open stance; Chasen Shreve designated for assignment by Mets

Your daily horoscope for Wednesday, July 6, 2022

No deals with SNP before or after election – Sir Keir Starmer

Famous British goods could lose out under UK-Australia deal

Boris Johnson bids to save premiership after Cabinet resignations

Boy, 2, loses both parents in Highland Park shooting, is saved by strangers