Codey Zuelow was working at Discount Tire in Bloomington, where he brings an unmistakable kindness to his customer interactions.

It was exactly what Barbara Lewis needed.

“That’s what I was thinking on the way home, I kept saying, ‘Who does this? Who says things like that?'” Lewis said. “I mean, it just really makes you believe that there’s still good people.”

Lewis was waiting for winter tires last week when she got a call that her mom had died.

“Word for word I was like, ‘Barbara needs to get out of here,'” Zuelow said. “I grabbed three guys and got it done in like 20 minutes.”

Lewis says she was thinking about life and death and feeling sad when Zuelow brought her her keys. 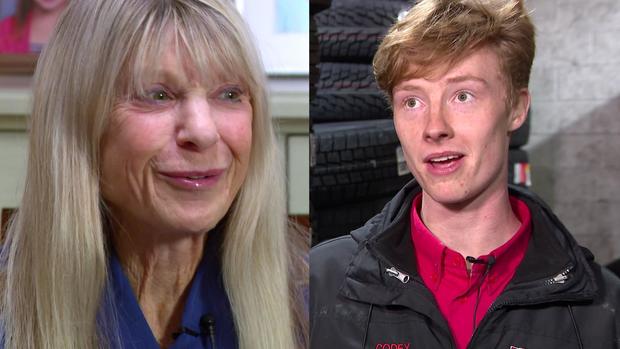 “I just lost it,” she said. “And he gave me the biggest hug, and I was just crying.”

Zuelow says he got a little teary-eyed, too.

“You see somebody, anybody regardless, stranger or not, in that much pain, you empathize for them,” he said.

Zuelow also offered to shovel Lewis’s driveway, but she said, ‘No thanks, I’ll just take another hug.'”

They both are quick to say that kindness can be spread year-round, not just during the holiday season.

Lewis returned to the tire shop Monday with two dozen donuts and $100 to give to Zuelow as a Christmas gift.