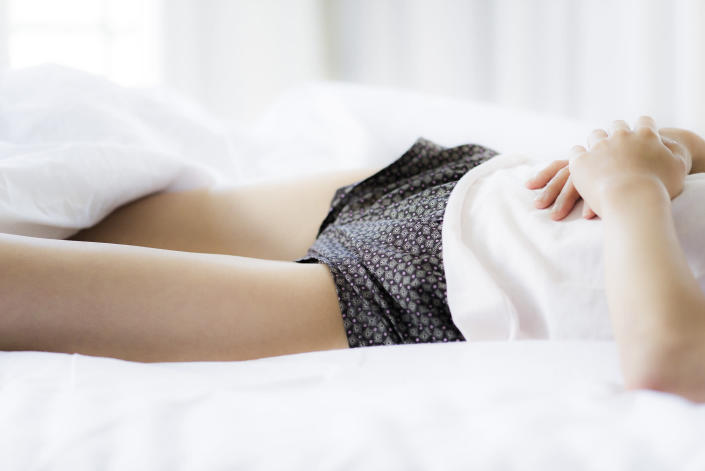 Can your period get ‘stuck’? (Getty Images)

Some women can practically set their clocks by the arrival of their period.

They know that as the end of their 28-day cycle approaches, they’ll start to feel those familiar lower abdominal cramps, sore boobs and the tell-tale fatigue and irritability that normally signals the arrival of Aunt Flo.

But sometimes, a peculiar thing happens, though the signs are all there that your period is about to arrive, there’s still no sign of it two days later.

The Health Site previously reported that there are other symptoms of a ‘stuck’ period including a distended, swollen lower abdomen, which is sometimes warm to touch, slight spotting, and radiating pain just below your ribcage.

Interestingly, it is something that many women seem to have experienced, with a quick search of ‘my period is stuck’ throwing up examples of concerned women taking to forums to ask what’s going on.

But is your period getting stuck an actual thing or is something else going on?

It seems experts are divided on the subject.

Gynaecologist Dr Maya Lulla told Health Site that though not medically recognised the condition is common among young women who haven’t undergone childbirth.

“In young women, the opening of the womb is constricted since they haven’t gone through childbirth,” she said.

“Once they give birth, the opening widens and facilitates easy and unobstructed flow of menstrual blood. As long as you eventually get your periods, it is not something you should worry about.” 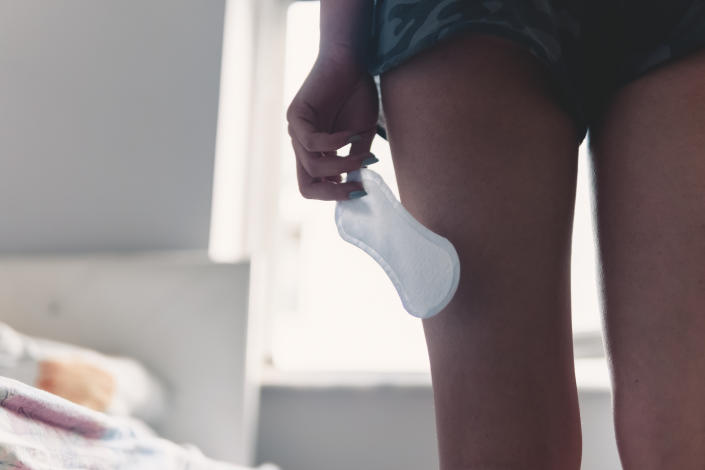 What’s going on when your period feels ‘stuck’? (Getty Images)

But Dr Lynae Brayboy, chief scientific researcher at Clue, believes that though the symptoms listed above may sometimes feel like a ‘stuck’ period, it’s unlikely that’s actually what’s going on.

“First, let me clarify that your period cannot get ‘stuck’,” she says.

“The period happens at the beginning of each menstrual cycle,” she explains. “The whole purpose of the menstrual cycle is to produce an egg that could be fertilised and lead to a pregnancy.

“When pregnancy does not occur the uterus sheds the lining that would have provided a place for an embryo, a fertilised egg, to grow.”

So what could be happening?

“The uterus sheds the lining, which is the period via the cervix and the vagina,” Dr Brayboy continues. “So unless something has happened like surgery, trauma or scarring the menstrual blood can come out, just like sperm can enter.

“Our bodies are not a clock so menstrual cycles have variation because ovulation varies.”

She goes on to say that slight alterations in the timing of your period over the years are very normal.

“After the first menstrual cycle it can take several years for the menstrual cycle to normalise and after that every transition throughout the reproductive lifespan including the the postpartum period, breastfeeding or chestfeeding exclusively, and perimenopause/menopause can interrupt and/or change the timing and characteristics menstrual cycle,” she adds.

According to Dr Brayboy the menstrual cycle can also be interrupted by things like diet, exercise, stress, medical conditions, dietary supplements/herbs and medications. 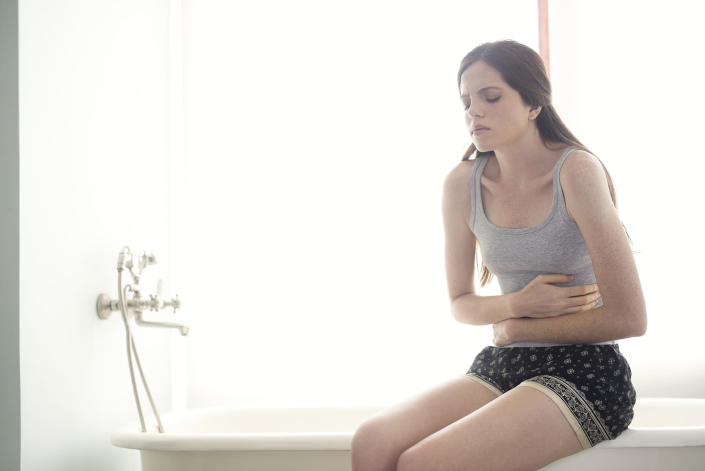 Sometimes it feels like your period is about to start but it doesn’t actually arrive. (Getty Images)

There are some other explanations for having all the period signs, but no period too.

“The first thing to rule out is possibility of pregnancy,” explains Mr Narendra Pisal, consultant gynaecologist at London Gynaecology.

“Hormones from early pregnancy can cause various symptoms including cramps, so it is important to do a pregnancy test.”

Mr Pisal says that, while rare, there are some other potential explanations for your period feeling ‘stuck’.

“If there is history of any uterine procedures such as hysteroscopy, curettage, IUD insertion, surgical termination or retained placenta, intrauterine adhesions or scar tissue (Asherman’s syndrome) can form as a result and lead to a trapped period,” he explains.

“Treatment of abnormal cells on the cervix (loop treatment or cone biopsy) can also lead to closure of the cervical canal (cervical stenosis) and can stop the period from coming out.”

More commonly you could have a lighter than usual period, which could contribute to a feeling that it is ‘stuck’.

“In some women, the period may be very light and may take time (sometimes days) to come out through the cervix and vaginal canal,” Mr Pisal explains. “This may also give the feeling of a stuck period.”

It is unlikely, however, that your period blood won’t show up eventually, even if it takes a little longer than usual.

So should you be concerned if you have all the signs that your period is due to arrive, but no actual period?

Not necessarily. While having delayed periods is generally not something to be worried about, if you are experiencing uncomfortable symptoms or have any concerns about your menstrual cycle it’s important you consult your GP or gynaecologist.