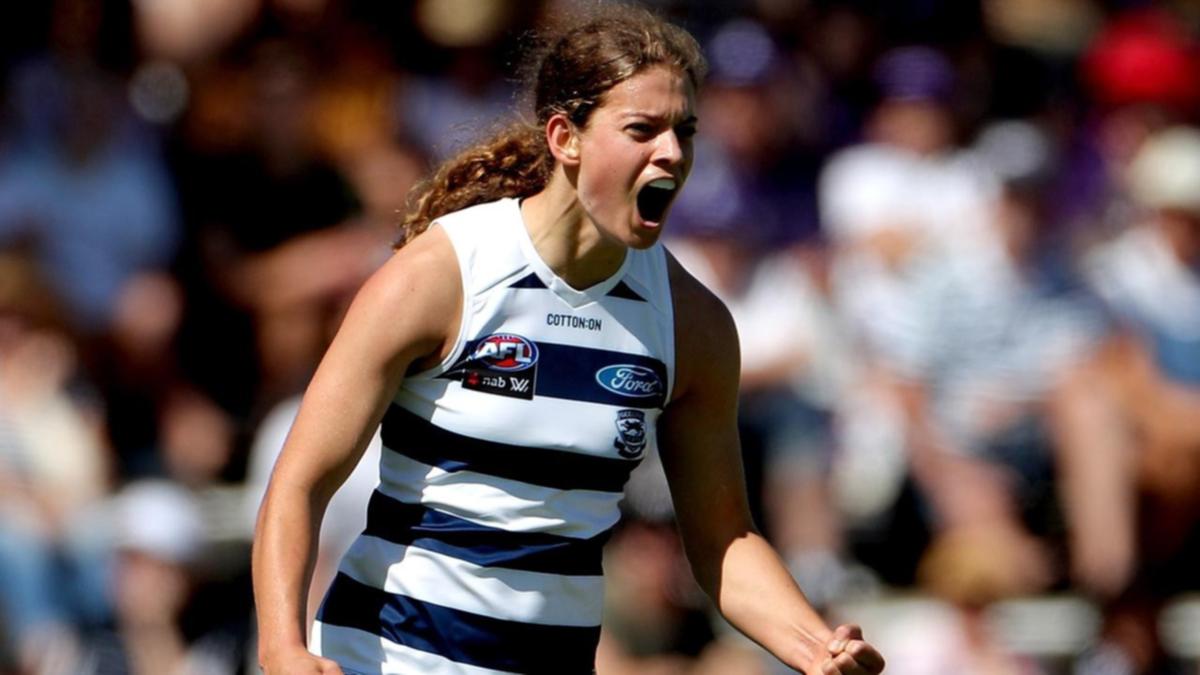 Geelong have overcome the absence of suspended star Georgie Prespakis to boost their AFLW finals hopes with a thrilling one-point win over the Western Bulldogs.

Prespakis was hit with a two-match ban during the week for a dangerous tackle and watched from the sidelines in Ballarat on Saturday.

Trailing by 19 points early in the final quarter, the Bulldogs kicked the last three goals of the game.

But they left their run too late, with the final major floating through as the siren sounded.

It was Geelong's first ever AFLW win over the Dogs and took them above their opponents on the ladder with a far superior percentage.

Both sides have 4-2 records.

The result also kept the Cats in the top-four mix.

Morrison (21 disposals), Rebecca Webster (17) and Amy McDonald (15) found plenty of the ball for Geelong, while Scott (two goals) and Chloe Scheer (one) were dangerous in attack.

Bulldogs captain Ellie Blackburn (25 disposals) tried to lift her side and ruck Alice Edmonds fought hard against the tide.

The pair helped the Dogs to a positive 29-19 clearance tally, but Geelong had too many contributors around the ground.

The ball lived in the Bulldogs' front half for long periods of the opening term as they generated a 10-4 advantage in forward entries.

But the lead was just two points at quarter-time when former Cats star Richelle Cranston missed her set shot after the siren.

Scheer found plenty of space inside-50 to put Geelong in front for the first time early in the second term.

And the Cats, who kept their opponents goalless in the second quarter, would have led by more than seven points at the main break if not for a string of wasted chances in front of goal.

Mia Skinner provided a highlight with a brilliant goal from the boundary line during the third quarter and Geelong looked home early in the fourth term when Julia Crockett-Grills extended the advantage to 19 points.

Rylie Wilcox and Deanna Berry kicked goals to help the Bulldogs fight their way back into the contest and Elle Bennetts' late shot floated through as the siren sounded.

West Indies could be forced to give a debut to pace bowler Marquino Mindley just 48 hours after getting off a flight from the Caribbean as the tourists battle several injuries in Adelaide. Veteran quick Kemar Roach (hamstring), young seamer Jayden Seales (knee) and No.3 bat Nkrumah Bonner (concussion) ...

The Australian Professional Leagues will use the Socceroos' World Cup performance in Qatar to push the government for funding for the A-Leagues' academy programs. According to data presented in an APL report to mark two years since their split with Football Australia, 65 per cent of the Socceroos squad ...

Only one man in the Australian squad was more disappointed with Lance Morris missing out on a test debut than the 24-year-old himself, and that was Cam Green, who copped the quick in the nets after the call was made. Scott Boland’s inclusion for the Adelaide test at the expense ...

Aaron Finch insists talk of his cricketing demise is premature and is adamant there remains plenty of “love” for an Australian team which has been deemed unpopular with supporters. Australia’s 36-year-old T20 captain on Wednesday dismissed suggestions the upcoming BBL season would be his farewell campaign with the Melbourne ...

Wayne Bennett has confirmed the Dolphins have five positions left in their roster for 2023 as the new NRL franchise continues negotiations with Brisbane fullback Tesi Niu. Coach Bennett was at the helm of the club's inaugural open training session attended by 600 fans on Wednesday. With less than ...

West Coast coach Adam Simpson is hopeful his North Melbourne counterpart and friend Alastair Clarkson will be given the green light to coach against him in round one of next season's AFL. Clarkson and Brisbane coach Chris Fagan are currently at the centre of an independent investigation into claims ...

NRL star Tom Starling was held in a chokehold while a police officer punched him in the ribs during a violent affray, a court has been told. The Canberra Raiders hooker and his brothers have fronted court to fight allegations about their roles in a massive brawl at a Central ...

Amy Jones and Sophia Dunkley have made half-centuries as England beat West Indies by 142 runs in Antigua to go 2-0 up in their three-match ODI series. England won the toss and chose to bat, with Tammy Beaumont and Emma Lamb making 37 off the first eight overs before ...