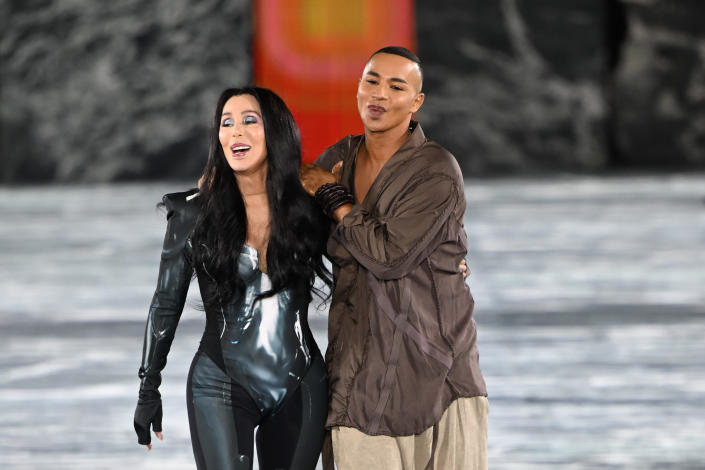 The 76-year-old singer defied her age to rock the runway for the finale of designer Olivier Rousteing’s new collection in a skin-tight, cleavage-baring latex catsuit with statement shoulder pads.

For her futuristic appearance the music icon wore her hair in loose waves that fell below her shoulders, and finished the stand-out look with fingerless gloves and platform wedge boots.

Strutting down the catwalk, the Believe star went for a bold metallic make-up, which she wore with a slick of glossy plum-hued lipstick.

The Oscar winner was joined on the runway by designer Rousteing, 36, who wore an oversized brown shirt which he teamed with a pair of baggy beige trousers and platform sandals. 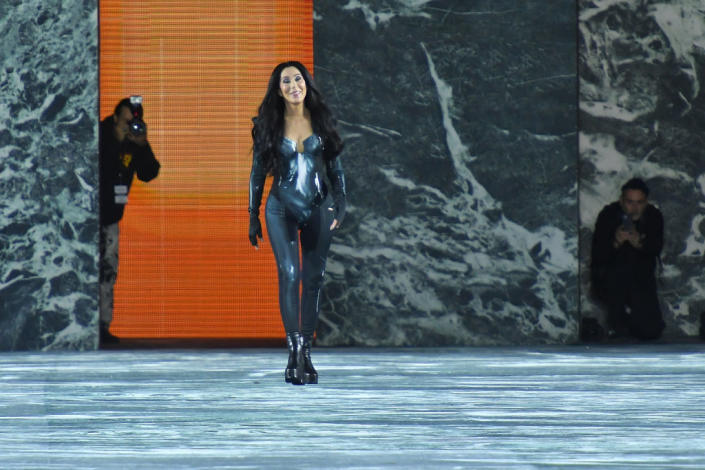 Cher has stolen the show at Paris Fashion Week donning a skin-tight bodysuit to close the Balmain show. (Getty Images) 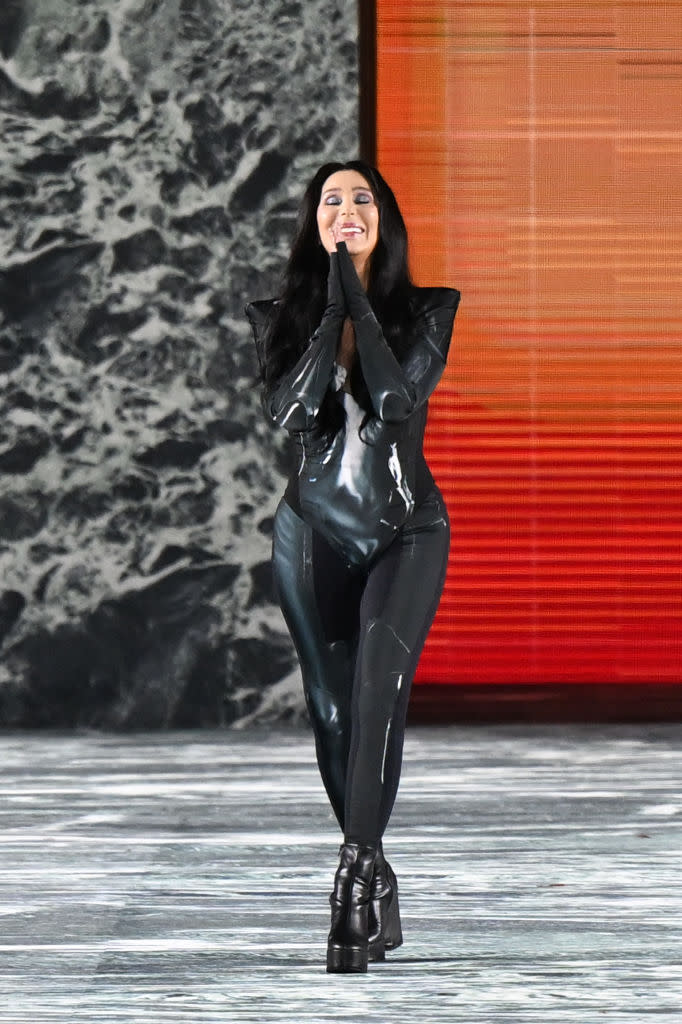 Cher proves that age is just a number in a plunging bodysuit at Balmain. (Getty Images)

Following her catwalk cameo, Cher told her fans how much she'd enjoyed her march down the runway.

“Just had the best time, on stage…felt great,” she wrote on Twitter. “Show was probably best fashion show 'ever'. Models were beauty from another universe. Clothes 2 die 4..Olivier 2 die 4. Stage was calling me Cher….oh Cher…come home…I hear you.”

And social media was certainly impressed with the star's appearance.

“Cher closing for balmain is so iconic she looked amazing,” one fan wrote.

“Cher walking for Balmain….oh my god unreal! I’m away to pound the gym for the next 20 years,” another agreed.

“Cher at 76 looking incredible at balmain show,” yet another user commented. 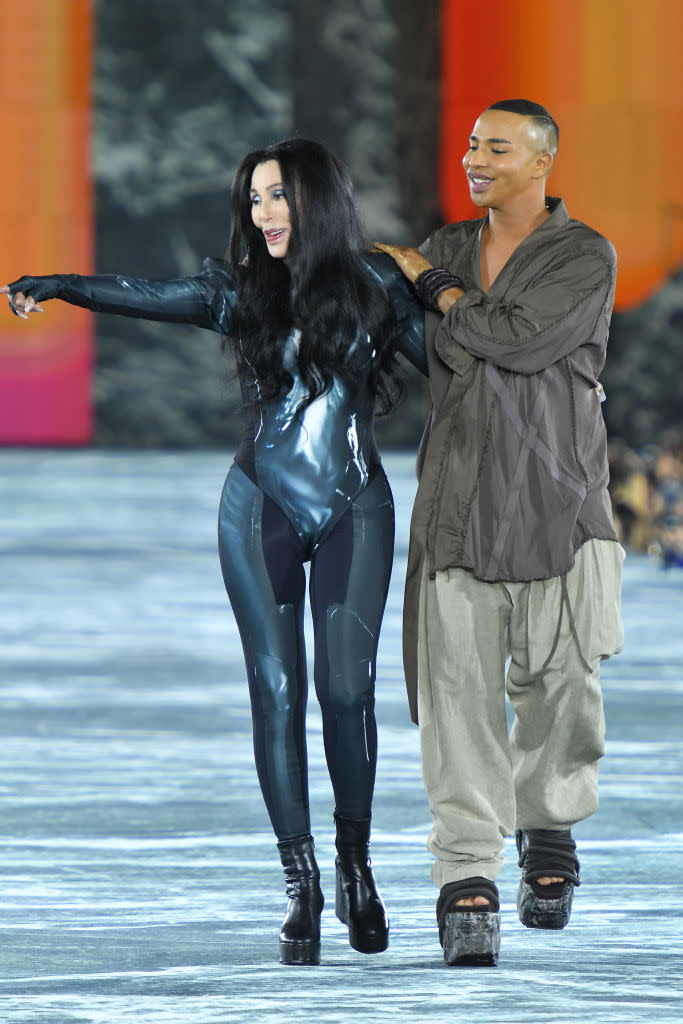 Cher is no stranger to a flesh-flashing bodysuit, with the garment becoming something of a signature style throughout her illustrious career.

Back in 2017, while picking up the prestigious Icon Award at the Billboard Music Awards, she re-wore an incredible see-through black bodysuit she'd first worn in 1989.

And in 2019 the Mamma Mia: Here We Go Again star rocked a retro, embellished, purple jumpsuit with a plunging neckline to perform on stage at the America's Got Talent final. 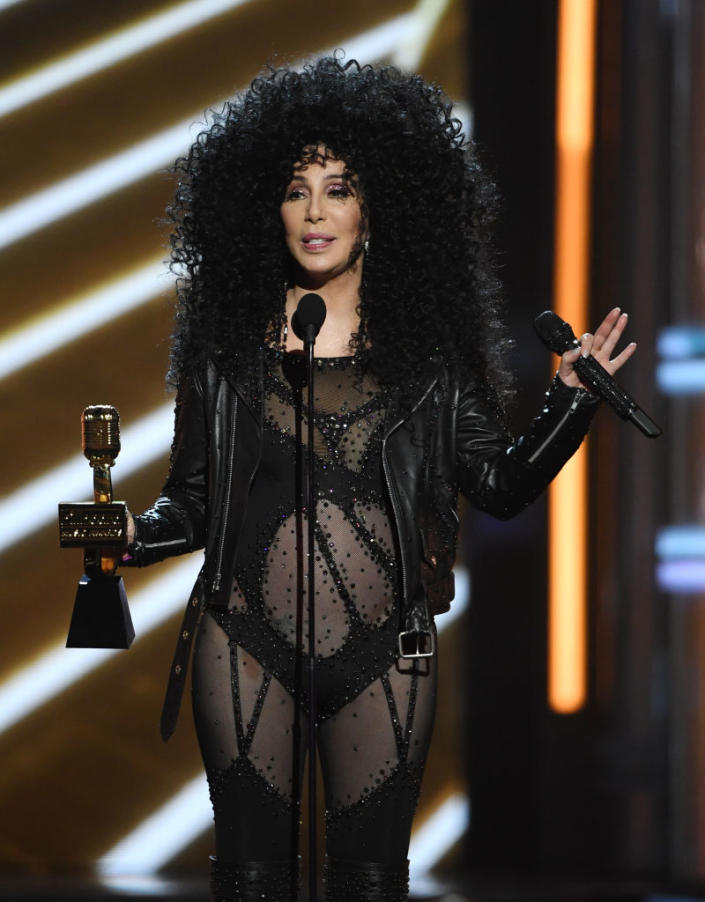 Cher rocked a sheer jumpsuit at the Billboard Music Awards in 2017. (Getty Images)

Cher's show-stealing appearance at PFW comes after the singer cheekily responded to a tweet that compared her to pop star Dua Lipa, who is nearly half a century younger than she is.

A fan on Twitter wrote: “Dua Lipa, the Cher of our generation,” over a clip of Dua bearing something of a resemblance to the Mermaids star.

By way of a reply, Cher wrote: “How many yrs are in a generation” with a thinking emoji.

Watch: Cher shuts down fan who called Dua Lipa the 'Cher of our generation'

“[Going grey] is fine for other girls,” she told People. “I'm just not doing it!” 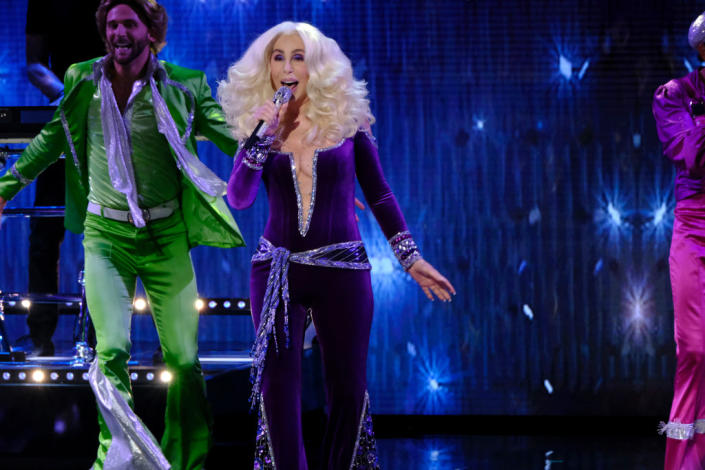 This purple bodysuit was Cher’s outfit of choice for the ‘America’s Got Talent’ finale in 2019. (Getty Images)

The thought of going grey isn't the only thing the Turn Back Time singer dislikes about the ageing process.

When previously asked how she feels about getting older the pop icon admitted honestly: “I hate it.”

“Any woman who is honest will say it's not as much fun,” Cher continued. “When I was working on the road we used to work two shows a night and then go out dancing all night long, but these days, it's like we've got to rest because you've got another night.”