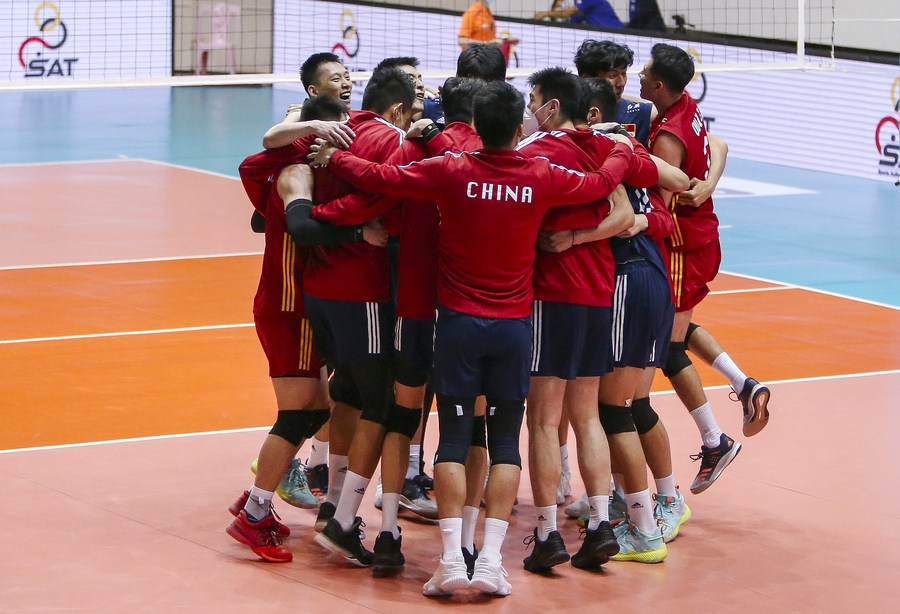 Chinese players celebrate after defeating Japan 3-0 in the final of the men’s volleyball Asian Cup in Nakhon Pathom, Thailand on Aug. 14, 2022. (Xinhua/Wang Teng)

Three-month overseas training and competing has given the Chinese men’s volleyball team a confidence boost ahead of their 2023 campaign.

BEIJING, Sept. 30 (Xinhua) — The head coach of Chinese men’s volleyball team, Wu Sheng, believes that his squad has laid a solid foundation for their quest to qualify for the 2024 Summer Olympics.

China stunned world top-ranked Brazil in the FIVB Nations League in June before winning the Asian Cup title for the first time in 10 years. But Wu’s side then fared badly in the world championships, losing three games in a row and failing to win even a single set.

“It was a joy to book a spot in the next Nations League through our players’ hard work. We had done so much work in our training camp at home. So it was not surprising that we could beat a powerhouse like Brazil,” Wu said.

“A surprising win does not mean that we are competitive. It’s still a long way for us to catch up with others,” he added.

Wu blamed fatigue for his team’s unsatisfying performance at the World Championship.

“We spent nearly three months abroad, which was exhausting for our players. None of us had such experience before,” Wu said.

“We traveled between different countries to compete in three tournaments. Both living conditions and food are different from that in China, which took us too much energy to adapt to.”

It was the Chinese team’s first overseas trip since they won the bronze medal at the 2021 Asian Championship. Wu said that he has learned valuable things from this international travel.

“I found the squad is more experienced and tacit than before, but when things did not go well, our players tended to lose confidence, especially when they realized they could not take control of the match anyway. Then I realized as a coach, I should always encourage players and focus more on their mood,” Wu said.

Next year will be very challenging for the Chinese squad, as they will compete at the Nations League, Olympic qualification tournaments, Asian Championship and Asian Games to earn ranking points.

China currently ranks 26th in the world, with a one-point gap from the Czech Republic, Bulgaria, Finland and Qatar.

At Paris 2024, world rankings will play a bigger role in the definition of quotas. As the host country, France has automatically qualified for the Olympics. Six of the remaining 11 quotas will be decided by three Olympic qualification tournaments to be played in September and October 2023. The five remaining places will be decided by the FIVB rankings in June 2024, prioritizing countries from continents that do not have qualified teams in the Olympic tournament.

Despite his team being regarded as underdogs in some tournaments, Wu said their goal in the Paris 2024 Games remain unchanged and the team will give everything to secure a ticket to the grand stage.

The coach has already worked out a plan for the next year. “We intend to hire retired foreign players to be our training partners, which may be useful for improving our serves,” said Wu.

“We will also shore up our weaknesses through training and select more potential players to join us so that we can have different lineups for different tournaments. I hope to reduce players’ stress and fatigue,” he added.

'No political appointees in GLCs'

Ban on single-use plastics at DBKL offices from Dec 1

The last chance for a Malaysian Malaysia?

ESG compliance by companies – all a farce?

PM urged to consult with party leaders on Cabinet line-up

YOURSAY | No, Zahid does not deserve to be given DPM’s post

Even people with only a marginal interest in the royals have some knowledge of Charles and Diana’s “love story,” and The Crown digs into just how incompatible they were, how little they understood each other, and how toxic their relationship was. But here’s the thing: The Crown is fiction. And ...


View more: Prince Charles and Princess Diana’s First Meeting Was Completely Different Than on ‘The Crown’

Soon (fifth from left) presenting a memento to Nasyitah during the foundation’s visit to Sibu Tua Pek Kong Temple. With them are the foundation and temple committee members. AN ISLAMIC non-governmental organisation (NGO) is conducting visits to churches and temples in Sibu, Sarawak, to strengthen religious and racial harmony ...

All eyes on second most powerful position, and it's not the deputy prime minister

Pressure during game leads to poor performance for Croatia and Japan

The last chance for a united Malaysia?

BN has confidence in Anwar

I turned down a new S600 official car, says Anwar

Genoa, Alexander Blessin destroys the team: 'They look like amateurs'

On the console: Netflix’s Stranger Things

Sabah leaders call on Anwar in show of support

Drones: The good, the bad and the ugly