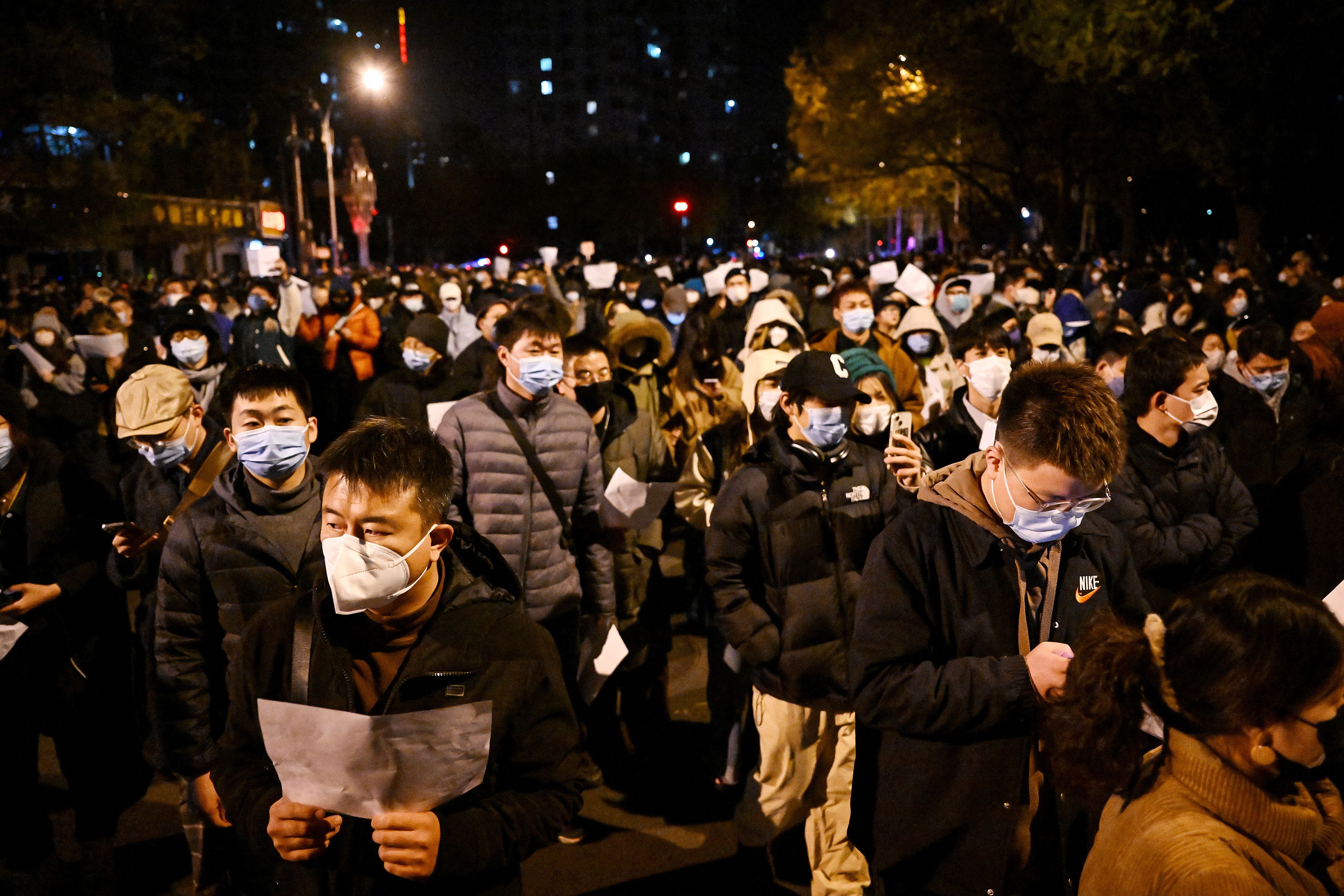 Protesters march along a street during a rally for the victims of a deadly fire as well as a protest against China’s harsh Covid-19 restrictions in Beijing on November 28, 2022. A video of Chinese Covid-19 lockdown protestors breaking down a gate has gone viral on social media.

A video of protesters in Wuhan demonstrating against China’s Zero-COVID policy has gone viral.

The clip shows the protesters attempting to pull down a gate separating their community as part of the restrictions put in place. Bystanders can be seen recording with their phones and watching as the gate is toppled.

Demonstrations against the government and President Xi Jinping are rare in China and have sparked international attention. Protests have been erupting across the country after an apartment fire in city of Urumqi that resulted in 10 fatalities.

Protesters have argued that China’s Zero-COVID policy and its restrictions may have slowed efforts to save victims of the fire and resulted in needless deaths.

The video, dated November 27, was posted on Sunday by the RFA_Chinese Twitter page, a new organization that focuses on Asian nations. The clip has so far been viewed 1.8 million times.

“Wuhan residents: ‘The epidemic started in Wuhan, and it will end in Wuhan.’

“The wave of demonstrations in China has blossomed everywhere. The number of people who took to the streets far exceeds the epidemic prevention personnel.

The Chinese government has said that since the first COVID-19 case was discovered in Wuhan, its policies and actions have prevented a global economic downturn and millions of deaths.

The current protests highlight the growing frustration of people in China over the handling of the COVID-19 pandemic, sparking suggestions that the battle on COVID has come full circle.

Beijing’s policies have resulted in entire cities, businesses and communities being brought to a standstill over the last two years, despite the economic impact.

China has maintained that it has had few infections and deaths in the past two years. However, the latest data from the country released by Johns Hopkins University has indicated that from October 26 to November 26 the number of COVID cases in China had increased by more than 490 percent.

Georgia Representative Marjorie Taylor Greene, who has previously been critical of lockdowns and COVID restrictions, said she supported the Chinese protesters in a tweet.

Covid has been an evil tool of oppression.

It started in Wuhan, it ends in Wuhan.

I’m praying for these people. https://t.co/thSSge94f3

She also echoed the phrase “It started in Wuhan, it ends in Wuhan.”

“The CCP [Chinese Communist Party] has abused China’s people long enough. Covid has been an evil tool of oppression.

“It started in Wuhan, it ends in Wuhan. I am praying for these people.”

While the Chinese government has said it allows free expression, human rights experts have long raised concerns that protesters and demonstrations are stifled. It is not clear how the CCP will respond to the latest unrest.