Max Verstappen could win a second straight title on Sunday 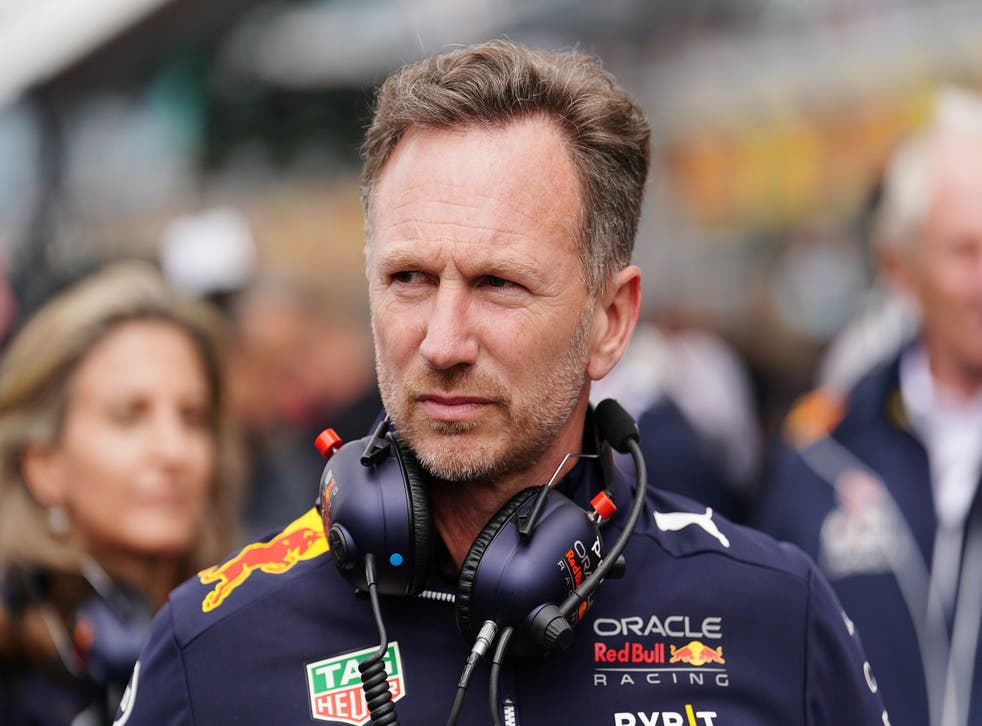 In a fiery, and tense press conference on Saturday, Horner insisted he is “absolutely confident” Red Bull did not overspend as Max Verstappen beat Lewis Hamilton to last year’s controversial championship.

Horner also suggested the accusations that Red Bull broke F1’s budget cap have been planted to take the spotlight away from Verstappen, who could claim his second title in as many seasons on Sunday.

Responding, Horner said: “We were a little bit taken aback by the comments from our two rival teams.

“The submissions between the team and the FIA is confidential, and I have no idea what the outcome of our rivals’ submission is so I would be intrigued to know where their source of information for these fictitious claims has come from.

“They are hugely defamatory, and one can only assume that it is not a coincidence that this comes at a point where Max has his first strike at a world championship.

“We are here talking about cost caps rather than the phenomenal performance Max has had this year. It is an under-hand tactic employed to detract from perhaps a lack of performance on track from our rivals.

“The FIA has stated that they have not completed their process, so unless there is a clear withdrawal of those statements, we will be taking it extremely seriously.

“We will look at all the options available to us because it is absolutely unacceptable to be making the comments that were made yesterday which are totally defamatory to the team, to the brands, and to Formula One.

“To reiterate, what is totally unacceptable, is for teams that are not party to any form of the submission to be making claims about our submission and about perspective penalties. It is just bang out of order.”

F1 introduced a budget cap of 145million US dollars (£114m) last year. But Verstappen’s Red Bull are facing accusations – reported in Auto Motor und Sport and Gazzetta Dello Sport – that they went beyond that figure, potentially by over five per cent, which would equate to more than USD7.25m (£5.6m).

The FIA is assessing Red Bull’s finances, with a verdict set to be revealed on Wednesday. Sanctions available to the sporting federation range from a reprimand to financial penalties to a deduction of drivers’ championship points. The latter would have an impact on last season’s result.

Hamilton was denied a record eighth crown when he was beaten by Verstappen at a deeply contentious winner-takes-all finale in Abu Dhabi on December 12. Verstappen took the title by eight points.

On Friday, Wolff was asked on Sky Sports about Horner’s claim that he was not aware that his team had breached the salary cap.

Wolff replied: “It’s funny that Christian has said that because it has been weeks and months that they’ve been being investigated. So maybe he doesn’t speak to his CFO.”

Horner added: “They [Mercedes] were very clear in naming Red Bull so when you refer to accusations that I am making, the accusations were actually from the other way round.

“We don’t know if we are in breach of the rues, and we won’t know until next week when the process has been completed.

“So, perhaps when these accusations are made, people in glass houses should not throw stones. This is an issue for the FIA to deal with and one for Red Bull to consider what our positions is with comments that have been made.”

EXCLUSIVE: How Brittany Higgins skipped town during the trial of Bruce Lehrmann for a beach getaway - and the behind-the-scenes moments from the trial we couldn't tell you about until now

Video: Kim Kardashian shows off her glorious Christmas tree at her Calabasas mansion as she continues tradition of waking up her children to the sounds of holiday music

Olivia Rodrigo CONFIRMS she will release new music in 2023 after debut album Sour scored her three Grammy Awards: 'I am so excited'

Investigation continue after broad daylight stabbing on Glasgow street (Image: Photos by Colin Mearns) COPS are continuing investigations after a man was stabbed in Glasgow. We previously reported that Bain Street had been locked down as forensics swept the area after a man was attacked. The 45-year-old was rushed to hospital to ...

Mac Jones appeared to yell ‘throw the [expletive] ball’ on the Patriots sideline as they lost to the Bills Mac Jones did not have a good night to kick off Week 13 of the 2022 NFL season. He threw for only 195 yards despite 36 attempts in his third ...


View more: Mac Jones appeared to yell 'throw the [expletive] ball' on the Patriots sideline as they lost to the Bills

Edinburgh reacts to Nicola Sturgeon spending over £260,000 on Supreme Court cases for indyref2

joules next retail High street retailer Next has secured a last minute deal to buy Joules, after gazumping the South African group behind Hobbs and Whistles to acquire the business out of bankruptcy. The FTSE 100 company will take on 100 Joules stores as well as its head office ...


View more: Joules to shut 19 stores after Next snaps up brand in last-minute deal

At the age of just 34, Stephen Flynn is a natural born leader – Roger Harris Stephen Flynn is the clear favourite to succeed Ian Blackford as the SNP’s Westminster leader next Tuesday and could be crowned without a contest. It would mark the culmination of a remarkably fast ...

Murray Smith, an RCMP technical specialist, acknowledged to the Commons public safety committee on Thursday that some hunting firearms would be prohibited under an amendment to the Trudeau Liberals’ gun control legislation. OTTAWA — Canada’s firearm classification system would baffle students of Byzantium, but even the uninitiated can figure ...

Scientists have discovered a new dinosaur species with a duck-like, streamlined body that may have used its adaptations to dive underwater to hunt for prey like modern-day penguins about 71 million years ago. The findings, published on Thursday in the journal Communications Biology, represent the first case of a ...

Winning candidate says Labour is offering "hope that politics should be about creating a better country for all of us".

EXCLUSIVE: Candice Warner reveals what she really thinks about husband David retiring from Tests - and what shocked her most about the Aussie cricket team when she first met them

Inside the night the Socceroos stunned Argentina: How one of the best free kicks you'll ever see gave Graham Arnold and his teammates a victory for the ages against the football giants

Car park to be swallowed by homes under Nailsea regeneration plan

The gang's all here! Carrie Bickmore posts rare sweet family picture with her partner Chris Walker and their three children from her last day on The Project

Video: Olivia Rodrigo CONFIRMS she will release new music in 2023 after debut album Sour scored her three Grammy Awards: 'I am so excited'

Emotional Chrissie Swan, Sam Pang and Jonathan Brown sign off their last breakfast radio show after it was cancelled by enjoying some Crown Lagers… but she sips on a Coke after going sober

Video: A toast to everyone getting along? Anna Wintour joins the Bidens, Republicans, Democrats and celebs for White House state dinner with Macron - as GOP leader Kevin McCarthy brushes off question about dining with investigation target Hunter

Video: Moment notorious tiny alleged terrorist who planned attacks on Sydney and Melbourne lands in Australia where he faces life in prison

Video: EXCLUSIVE: Little boy born with an extra toe on his foot FINALLY gets it removed - but was upset when he had to say goodbye to the extra limb he named 'Peggy'

'Stunning' British seaside town is perfect for staycations in 2023

Man suspected of stabbing his daughters - aged four and six - wife, female relative before killing himself: All five found dead inside million dollar home in Chicago suburb in 'domestic-related incident'

Mother of four hailed as a 'hero' after she pushed her daughter, 4, out of the way of an oncoming car before she was struck - now she faces a battle to save her leg

Analysis-Soccer-German exit not as shocking as it looks

Road closures in Dorset: nine to look out for

EXCLUSIVE: Little boy born with an extra toe on his foot FINALLY gets it removed - but was upset when he had to say goodbye to the extra limb he named 'Peggy'

PICTURED: Mom, 38, and her eight-year-old son who were killed in their sleep when tornado ripped through Alabama, causing large pine tree to fall on their home

Video: Why I gave up my job and sold my house to buy a Tesla: Melbourne man whose electric car videos caught the attention of Elon Musk has no regrets

Kim Kardashian and the art of distraction: Just divorced reality star almost spills out of her TINY bandeau top at Miami festival as she shakes off Kanye West drama and Balenciaga scandal

Video: Hardworking family who've paid taxes in Australia for more than 10 years are still fighting to avoid deportation - despite doing everything right to try and stay

Ready to party! Today Show host Allison Langdon beams as she heads from her final show to the dry-cleaners to pick up a fresh dress after breaking down in tears during her emotional send-off

'Could cause damage!' Drivers urged to top up 'vital' car fluid ahead of winter

The Who's Roger Daltrey's quiet life in serene Sussex village - house prices are £367,000

Why I gave up my job and sold my house to buy a Tesla: Melbourne man whose electric car videos caught the attention of Elon Musk has no regrets

Neighbours unsure on plans for hundreds of homes at Boots headquarters

From fighting for his life to allegedly 'turning on his Lotto syndicate and keeping their entire $1.5million for himself': Inside man's incredible year from sitting in hospital barely able to eat to 'becoming a millionaire'