Sublime finishing, accurate switches of play, movement in behind and neat trickery: Wednesday night was the perfect showcase for the talent Christopher Nkunku possesses.

Unless you have been living under a rock, or just drained of all your transfer interest over this past summer, the 24-year-old has signed a pre-contract agreement with the Blues ahead of a proposed move for the 2023/24 season, football.london understands. As reported earlier on in the year, Chelsea hold a long-term interest in Nkunku and have been keen to sign the 2021/22 Bundesliga Player of the Season for a while.

Naturally, I was tasked with watching the following game Nkunku was involved in to see how he would fare.

RB Leipzig were at home to Celtic in Wednesday’s night earlier kick-off at the Red Bull Arena. In a similar fashion to Chelsea, the Bundesliga side needed maximum points after losing their first two games to Shakhtar and Real Madrid. Recently appointed Leipzig boss Marco Rose set up on paper in a 4-2-3-1 formation with Nkunku down to be a 10, flanked by former Blue Timo Werner on the left, Dominik Szoboszlai on the right and Andre Silva led the line.

This is not an uncommon position for the French international, already praised for his versatility, he has operated as a more conventional centre forward but also out wide on occasion. Once the game began, Leipzig looked more like a 4-2-2-2, with Nkunku joining Silva as a strike partner. 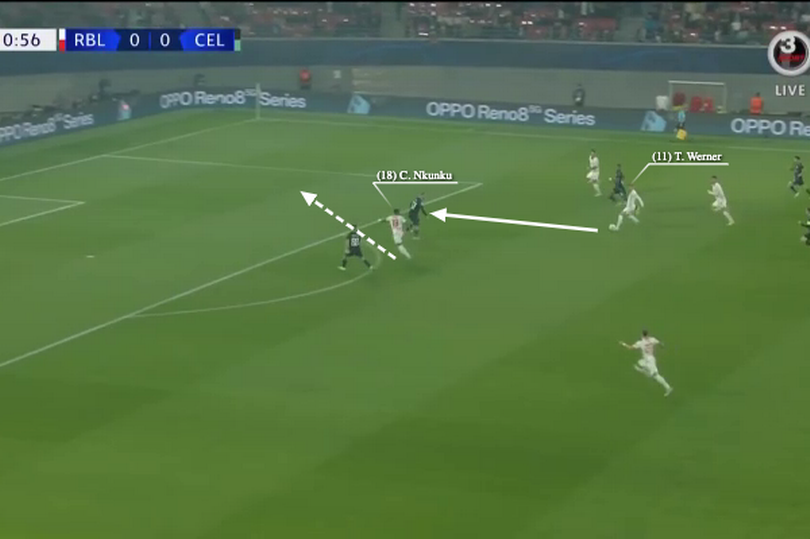 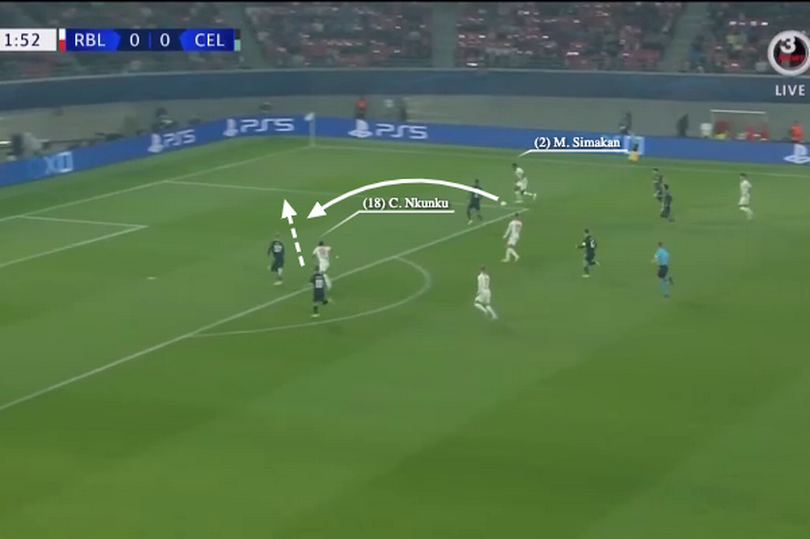 Leipzig’s directness and movement troubled Celtic all night, and Nkunku had the pleasure of consistently finding positions either on the last line of defence, looking to break their offside trap, or floating around others to make late runs into the box.

The first showcase of his talent in front of goal was cruelly ruled out by the new automated VAR. This move very much demonstrated the former of the two areas of threat, again occupying the gap between Celtic’s back-four. 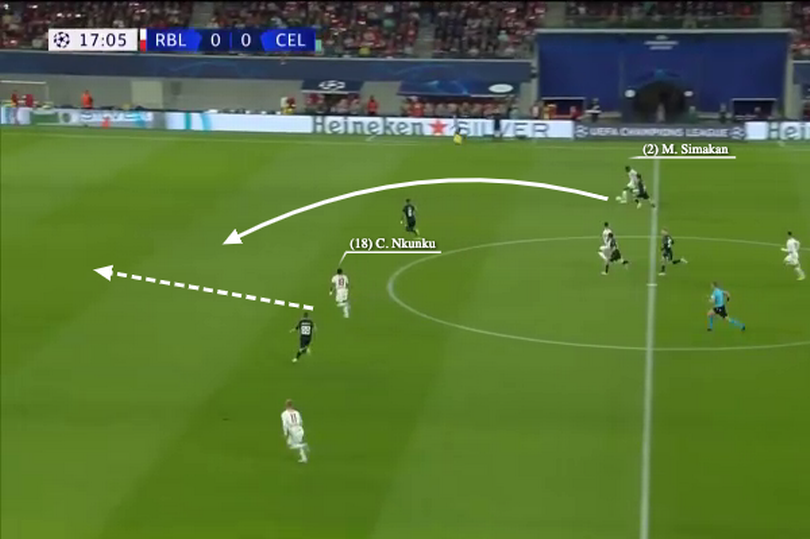 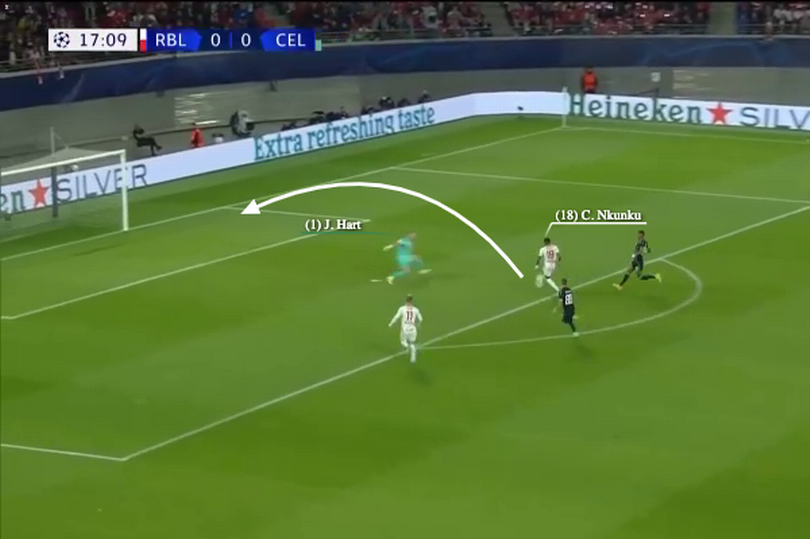 With Joe Hart rushing out, Nkunku nonchalantly chips the ball over the former Manchester City keeper with no stress. Although the goal rightly did not stand it was still a notably relaxed finish.

It only took 10 minutes for Nkunku to find himself again in a similar position. This time though, there would be no VAR to save the visitors. 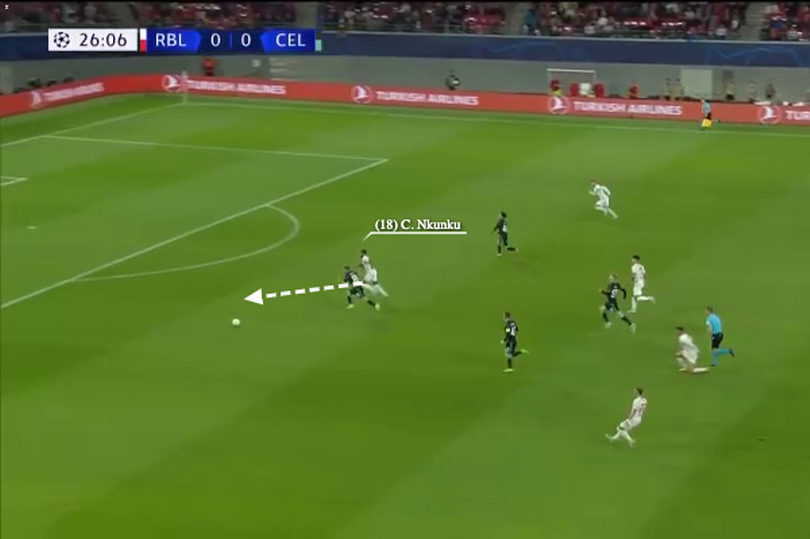 Nkunku accelerates onto a Silva through ball, nipping ahead of Josip Juranovic 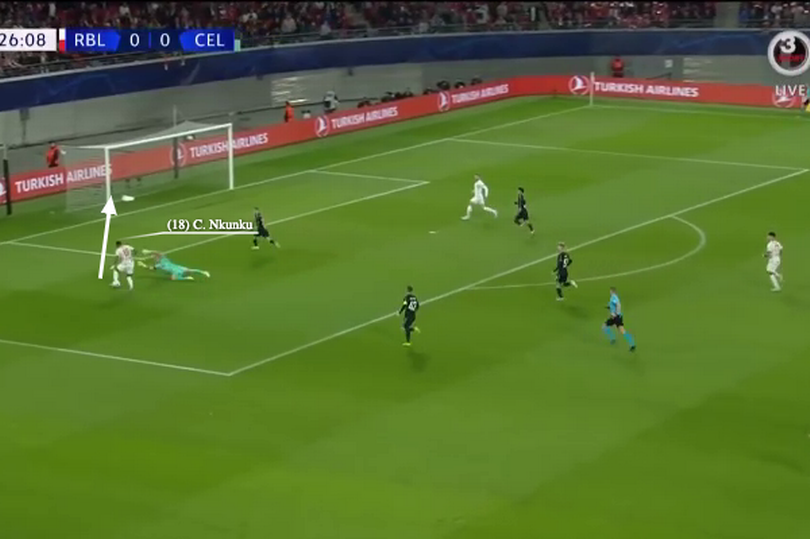 His first touch takes the ball away from Hart, the second precisely rolls the ball into the net before Juranovic can recover

Nkunku’s regular output of goals is his greatest asset, netting 20 years in 34 Bundesliga appearances last term, with this finish his ninth in only 13 so far this campaign.

There were also some moments of flair sprinkled on top of this efficient display. Casually flicking the ball through to Werner with his heel in another flowing move, only to be undermined by Werner naturally sticking to his gimmick of being offside.

As the game progressed into the second half and Celtic hit a surprise leveller, Nkunku dropped a little deeper, retreating much more to the position expected of him when the teams were released. Again, it is impressive how his technique comfortably allows him to interchange between positions fluidly — showing a good passing range from deep to switch play or having neat trickery in tighter areas higher up the field when confronted by several defenders. Werner failed to overcome this in the Premier League. One would hope Nkunku fares a bit better.

His consistent understanding with the marauding wingback Simakan would conjure Leipzig’s third and final goal of the night to seal the three points. In the first half, Nkunku provided a similar switch to Simakan. 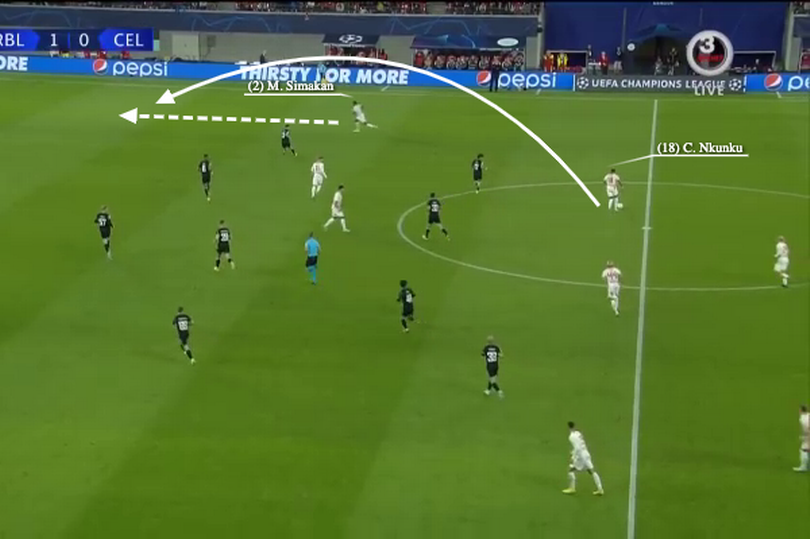 In the first half, Nkunku had provided a similar switch to Simakan. But the defender had little assistance once he got the ball 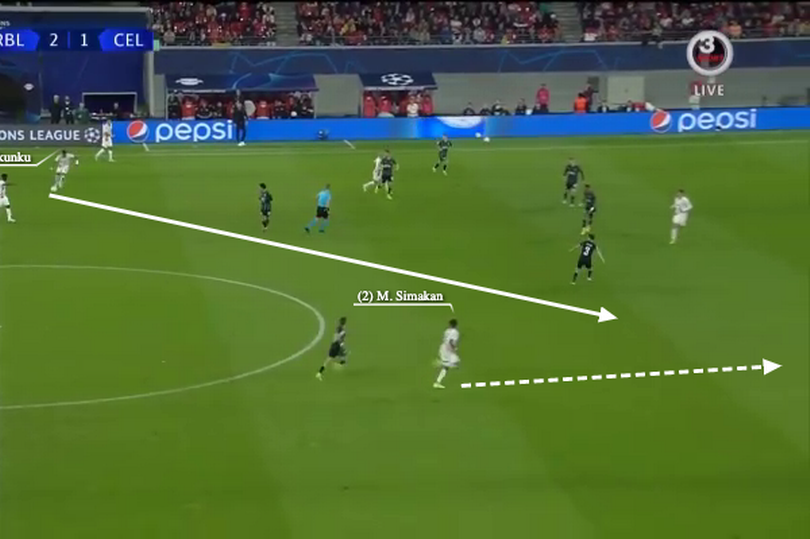 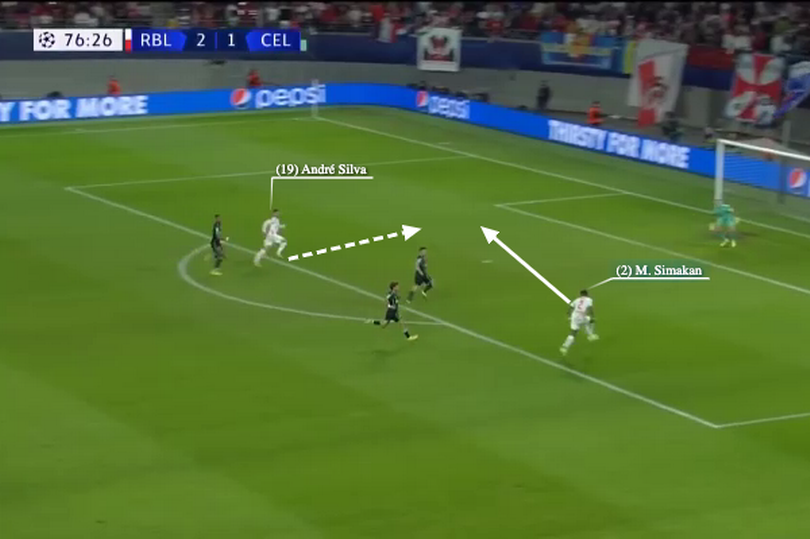 After last night, Nkunku has been directly involved in 61 goals for RB Leipzig since the start of last season. It is easy to see why his signature has been coveted by a number of top European clubs. His varied movement and skillset fit in with a flexible coach like Graham Potter, who you could see using his potential £53m man in interesting ways.

Part of Nkunku’s charm is that it was hard from this game to nail him down to one position or even trademark. He showed an equal level of striker instinct and the range of passing you would expect from someone operating a lot deeper.

Todd Boehly clearly sees the value in paying a little bit extra for the burgeoning talent who looks ready to make the next step in his career. If the transfer is sealed, Nkunku’s big challenge will be replicating his influence at a club where many attackers have stumbled in recent years.

World Cup: No one imagined Saudi could play at this level, Renard says

No one imagined Saudi could play at this level, Renard says

Poland vs Saudi Arabia PLAYER RATINGS: Robert Lewandowski was worthy of his big World Cup moment but Wojciech Szczesny was the real hero as Poles claimed a crucial win

It's not true: Saudi Arabian footballer denies getting Rolls Royce for shocking win over Argentina in FIFA WC


View more: Saudi Arabia coach Herve Renard DENIES that his players will be gifted a Rolls-Royce each by the country's royal family after their fairytale win over Argentina - as he insists their only goal is to reach the World Cup's last 16

Video: 'I went viral': Will Smith jokes after testing positive for Covid and being unable to surprise an audience at a screening of his film Emancipation


View more: Video: 'I went viral': Will Smith jokes after testing positive for Covid and being unable to surprise an audience at a screening of his film Emancipation

The car caught was in a tidal surge on Polzeath beach A car came close to being washed out to sea after being caught in a tidal surge on a West Country beach. The black Audi was parked on the sands at Polzeath, on Cornwall’s north coast earlier this ...

Cristiano Ronaldo offered £1.2million a WEEK to play into his 40s in Saudi Arabia after Man Utd axe

'I went viral': Will Smith jokes after testing positive for Covid and being unable to surprise an audience at a screening of his film Emancipation

Audi almost lost to the sea on West Country beach

Argentina vs Mexico LIVE: Lionel Messi and Co MUST WIN to stay in the World Cup after shock Saudi Arabia defeat... so can his star-studded team discover top form in time?

Saudi Arabia brought down to earth by Poland at World Cup

Poland get hard-fought win against Saudi Arabia at World Cup