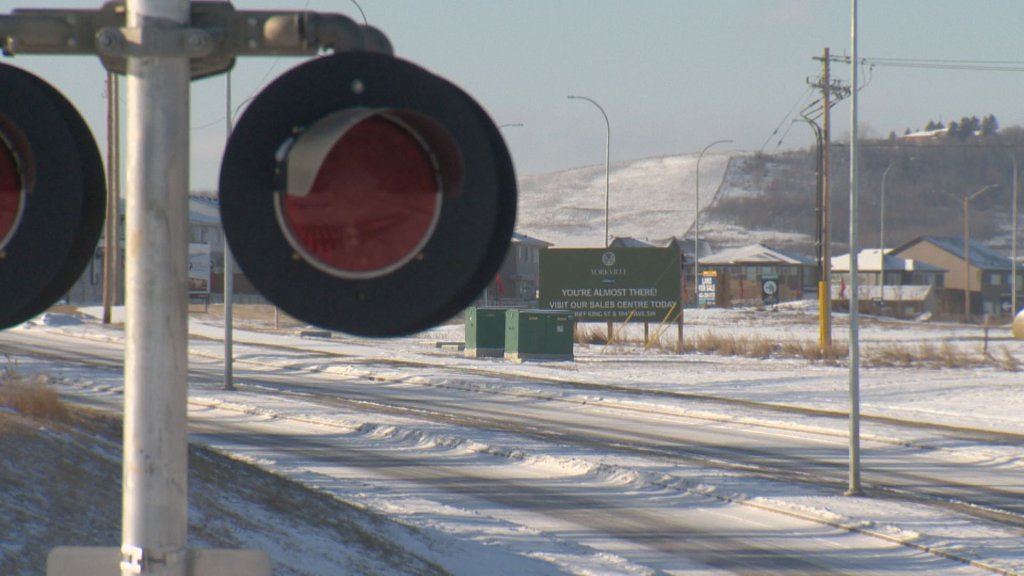 Train whistles at the CP Rail crossing at 210 Avenue S.W. has prompted complaints to the City of Calgary over the noise, resulting in the proposed whistle cessation.

Early morning train whistles in southwest Calgary have prompted city officials to explore a whistle cessation after several complaints in the area.

When those trains roll through, they sound off a whistle that lasts about 20 seconds.

City officials told committee those whistles resulted in complaints to the city from some of the newer communities in the area like Walden, Legacy, Pine Creek and Belmont.

It’s unclear how many complaints the city received.

According to the city, the crossing was realigned last year and a new, at-grade crossing was built along with bells and traffic arms.

“As a result, the need for whistling from the trains to indicate their approach and arrival is no longer required due to the premium safety measures that have been put in place,” Ward 11 councillor and committee chair Kourtney Penner told reporters.

The move to silence the whistles at the crossing comes as a surprise to Meryl Coombs, who runs the Spruce It Up Garden Centre just metres from the rail line.

“I would say it’s a bit of a surprise,” Coombs told Global News. “But I guess my bedroom is not right beside it.”

The garden centre has been in that location for 17 years, and Coombs said he is unbothered by the whistles.

“It’s not offensive to us at all,” Coombs said. “I kind of like the odd train noise, a little ambience.”

Megan Janzen, who lives in Walden, said she hears the train whistles early in the morning but isn’t bothered by the noise.

“I wake up early so it doesn’t really bother me,” she said. “But if you’re somebody that sleeps later, it might bother you. You can definitely hear it.”

Cherie Reaburn told Global News the train whistles are no worse than the traffic noise from 210 Avenue, but they can be bothersome in the evening.

“I do hear them — they’re a little annoying,” Reaburn told Global News.

Several other residents that spoke to Global News on Thursday said they were relatively unbothered by the train whistles.

According to the city, there are 54 rail crossings in Calgary near residential areas which already have whistling cessation resolutions in place.

Committee heard the city must issue each whistling cessation on a case-by-case basis rather than a city-wide bylaw.

“In many cases, crossings within the city don’t have the highest level of protection. They don’t have bells, gates and lights. They’re at-grade crossings with just crossbucks,” Canace Bain, a traffic engineering co-ordinator at the City of Calgary, told committee.

“We would have to look at upgrading — with the railway — all those crossings to provide that level of protection.”

Train whistles waking Edmontonians in the middle of the night

Committee voted 6-1 in favour of approving the whistle cessation with Ward 10 Coun. Andre Chabot voting against doing so.

“The impact to the adjacent residents is directly proportional to the proximity they are to where the whistle is actually being blown,” Chabot said in committee. “There’s no direct correlation to how loud it’s perceived by the residents.”

City council will still need to make the final decision on the whistle cessation.

If it’s approved, the City of Calgary will need to notify CP Rail and Transport Canada of the policy change in the area.

CP Rail did not respond to Global News’ request for comment.