The City of Ottawa has ongoing serious concerns about the Confederation Line’s performance and wonders whether it has been designed, constructed and maintained properly, according to court documents.

Those documents, filed earlier this month, will likely be what Ottawa’s newly elected council will hear about — in addition to being briefed on the highly publicized LRT inquiry and its impending final report — in a closed-door session Monday morning from the city’s legal team.

Council should hear about the city’s efforts to have a court declare that LRT builder Rideau Transit Group (RTG) — the consortium comprising SNC-Lavalin, ACS Infrastructure and Ellis Don — is in default of its 30-year contract.

On Nov. 4, the city filed a whack of evidence with the court in anticipation of a three-day hearing that was supposed to have taken place mid-month.

But it was postponed to the new year at RTG’s request after city expanded its argument against the consortium to include issues that arose in July 2022.

A power outage during which two backup systems didn’t work, a failed axle bearing and a lightning strike that caused the system to be down for days are all further evidence, the city says, that the Confederation Line is still not up to snuff.

“There continue to be significant issues with the performance of the system and the City remains seriously concerned with RTG’s performance,” according to the court documents.

It’s been almost a year since the the city applied to the Ontario Superior Court, asking it to confirm RTG is not living up to its obligations in the LRT contract.

If the court agrees, it would pave the way for the city to get out of its 30-year contract with RTG’s maintenance arm, worth about $1 billion.

RTG argues, among other things, that the city launched its battle in part to distract from the public inquiry that had been ordered by the province the previous month.

If true, the court battle has not been much of a distraction. It is moving much more slowly than the inquiry, with none of the dramatic in-person testimony that last summer’s public hearings provided.

But the recently filed documents provide an insight into how concerned city officials — or at least their lawyers — continue to be about the reliability of the Confederation Line.

Here’s the city’s take on the seriousness of last July’s LRT issues, according to court documents.

On a Saturday night during Bluesfest, a power outage shut down the line between Tunney’s Pasture and Lyon stations.

Power outages can happen on any electrical transit system, says the city, but in this instance both backup systems also failed: the uninterruptible power source batteries and the generator.

The incident “raised a multitude of issues whereit appears that the system has not been maintained properly or perhaps not designed and constructed properly,” according to an Aug. 18 letter from OC Transpo transit service director Troy Charter to RTG CEO Nicholas Truchon included in the court documents.

As well, Rideau Transit Maintenance (RTM) says it’s told the city the batteries “have been failing prematurely,” and that it has replaced some and has a plan “to prevent further premature failures.”

RTM says it’s adapting generators so they don’t have to be restarted by a licensed engineer, a conversion process the company says should be finished near the end of this year. 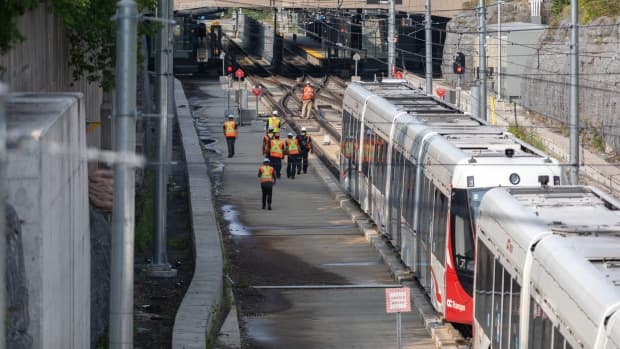 Crews walk along the Confederation Line in Ottawa on Aug. 9, 2021, one day after the axle of this out-of-service LRT train dislodged from the rail. The Transportation Safety Board of Canada is now investigating.

Arguably the most concerning of the summer’s LRT troubles was an axle bearing assembly failure on one of the light rail vehicles, discovered after the car was removed from service and the operator reported vibrations on their train.

The city argues that the operator’s actions prevented what could have been a third derailment on the main line.

A few weeks later, train-maker Alstom confirmed that the failure was similar to the issue that caused a derailment at Tunney’s Pasture station in August 2021, when an axle broke and a wheel snapped off.

The root cause analysis of that 15-month-old incident is still not finished.

In a preliminary report delivered in May 2022, Alstom largely blamed the design of the track, suggesting the sharp curves put too much stress on the trains’ components. To this day, the train travels at much slower speeds on curves located on the eastern half of the system.

RTG doesn’t agree with the train-maker’s assessment and has hired the National Research Council to investigate. The Transportation Safety Board of Canada is also studying the problem.

For the city, the July 21 axle failure is a more recent sign that there are still worrisome issues with the Confederation Line.

“The city has serious concerns regarding RTG and its subcontractor’s performance,” Charter wrote in the Aug. 18 letter to Truchon.

What appears to have been a direct lightning hit to the overhead catenary system damaged 900 metres of overhead cable between uOttawa and Lees stations and took days to repair.

RTG can hardly be blamed for its system being hit by lightning, and said in court documents that “the City’s assertions that the damage to the system was ‘purportedly’ caused by a lightning strike are inflammatory and unwarranted.”

Still, the city wants a “full review” of the backup systems to protect against issues like lightning strikes, suggesting that the damage caused was more extensive than expected.

RTG argues that the city’s complaints — sent directly to the consortium through letters, as well in at court — are “unhelpful” to its work and “only serves to further deteriorate the relationship between the parties.”