Instead of getting stronger as the playoffs approach, the Yankees’ bullpen has more questions.

Aaron Boone said after Friday’s 2-1 loss to the Orioles at the Stadium that Clay Holmes was out with a strained shoulder that required a cortisone shot Thursday.

Holmes will be sidelined at least through the end of the regular season, with Boone saying the team believes the ALDS is a possibility, since that series won’t start until Oct. 11.

The right-hander said he felt something in his rotator cuff during his most recent outing in Toronto on Monday.

Holmes said it was “nothing too worrisome” and he’s “very optimistic” about being back for the playoffs, but the timing is ominous. 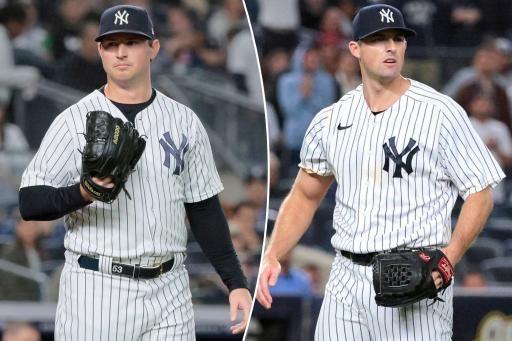 It’s the latest setback for Holmes, who has struggled throughout the second half and spent time on the IL with lower back spasms and went through a rough patch earlier this month when he allowed runs in five of six appearances.

Britton’s chances of making the playoff roster after undergoing UCL surgery just over a year ago may have come to an end Friday, when the left-hander was removed from his outing in the sixth inning after throwing a wild pitch and a visit from the training staff.

“His elbow is fine,’’ Boone said. “We didn’t want to push through something and have him end up hurting himself.”

Everything to know about Aaron Judge and his chase for the home run record:

Asked his chances pitching in the playoffs, Boone said, “We’ll see where we are [Saturday].”

Britton had the surgery just over a year ago and came back earlier than usual for that type of surgery in an attempt to get into the postseason.

Britton had walked five in just two-thirds of an inning in his two appearances since coming back and then walked the first batter he faced Friday against Baltimore, Gunnar Henderson. 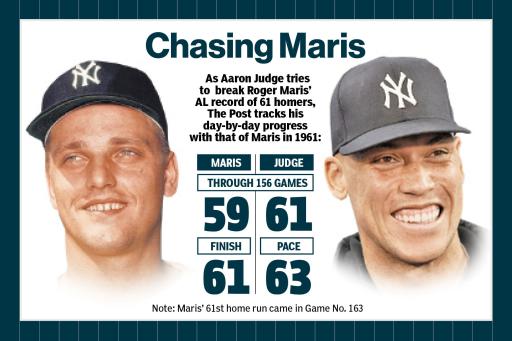 After Britton fell behind the next hitter, pinch-hitter Jesus Aguilar, first baseman Anthony Rizzo and catcher Jose Trevino went to the mound. Two pitches later, Britton threw a ball to the backstop.

Boone and trainer Tim Lentych came out, and after a brief chat, Britton was pulled from the game, replaced by Ron Marinaccio.

Before the game, Boone said Britton needed to work on his command, but added the 34-year-old had good arm speed and felt healthy.

Aroldis Chapman’s spot on the postseason roster isn’t secure, either. 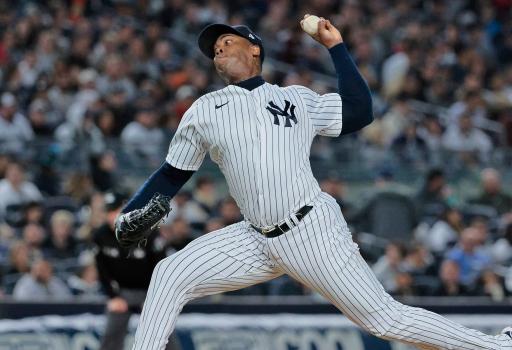 Asked Friday if Chapman was certain to pitch in the playoffs, Boone didn’t say yes.

“We’re really excited with where Chapman is,’’ Boone said of the lefty, who impressed on Wednesday in Toronto, retiring all three batters he faced — striking out two and hitting 101 mph.

“He has an outing like he did in Toronto and you say, ‘That’s it right there,’ ” Boone said. “It was dynamic. We know he can be that guy. It’s an important week for him and he’ll get regular work and hopefully continue to have that consistency.”

Chapman threw another scoreless inning in Friday’s game, but his velocity was not as good on a cool night in The Bronx and he didn’t strike out anyone.

Wandy Peralta, out with a back injury, threw a bullpen session on Thursday’s off day, with another scheduled for Sunday.

Boone said the lefty could pitch out of the bullpen in Texas in the final series of the regular season or hold off until the playoffs.


View more: How Mariah Carey’s love of Marilyn Monroe brought her to Broadway’s ‘Some Like It Hot’

Americans should expect Christmas trees to cost more this year, and they may want to buy their spruces early, according to a survey of wholesale growers. Inflation hit 7.7% in October, and Christmas tree growers weren’t spared with gasoline, diesel and fertilizer prices soaring. More than a third of Christmas ...

Singer Dua Lipa has been granted Albanian citizenship. (Credit: Getty Images) Singer Dua Lipa is one of the most popular pop artists in the world at the minute. Her fame has continued to rise after her hugely successful release of the 2020 album ‘Future Nostalgia’, which spawn hits such ...


View more: Dua Lipa: why did singer get Albanian citizenship, has she changed her name, where was she born?

The Giants aren’t American Airlines: they still want Odell Beckham Jr. on board. The team still plans to host OBJ on Thursday and Friday for a free agent visit, even though Beckham was escorted off a Sunday flight from Miami to Los Angeles, the Daily News has learned. The Cowboys, ...

A judge in Wisconsin is ordering Enbridge Inc. and an Indigenous band to confer about “imperfect” alternatives to shutting down the cross-border Line 5 pipeline. District Court Judge William Conley calls the prospect of shutting off the line “draconian” and wants Enbridge and the Bad River Band of the Lake ...

An RCMP dive team has recovered the bodies of the pilot and two passengers killed in a plane crash near Port Hardy, B.C., last week. The Cessna float plane went down in Strachan Bay on Wednesday, killing all three people aboard. “Efforts to locate the plane and any potential survivors ...