Their season has been ignored, but no longer.

Their record has been minimized, but no more.

Their presence on this fall’s Los Angeles college football scene was completely overshadowed until Friday night, when the UCLA Bruins emerged from a cool darkness into the blinding brightness of legitimacy.

At a Rose Bowl that rocked, against a team that had not previously cracked, UCLA stormed to the biggest win of the five-year Chip Kelly era, grabbing a 24-point lead then hung on to beat undefeated No. 15 Washington.

The 40-32 victory was a game not only about Chip, but chips.

“I’m reading through all the articles throughout the whole week, people are saying that we’re the worst 4-0 team out there, they’re writing us off,” said a hoarse quarterback Dorian Thompson-Robinson after three hours of brilliance. “My boys came in here with a chip on their shoulder. I think I told ya’ll on Monday, see if Washington can run with us, not the other way around. So that’s my answer. That’s my answer.”

It was truly quite the response. 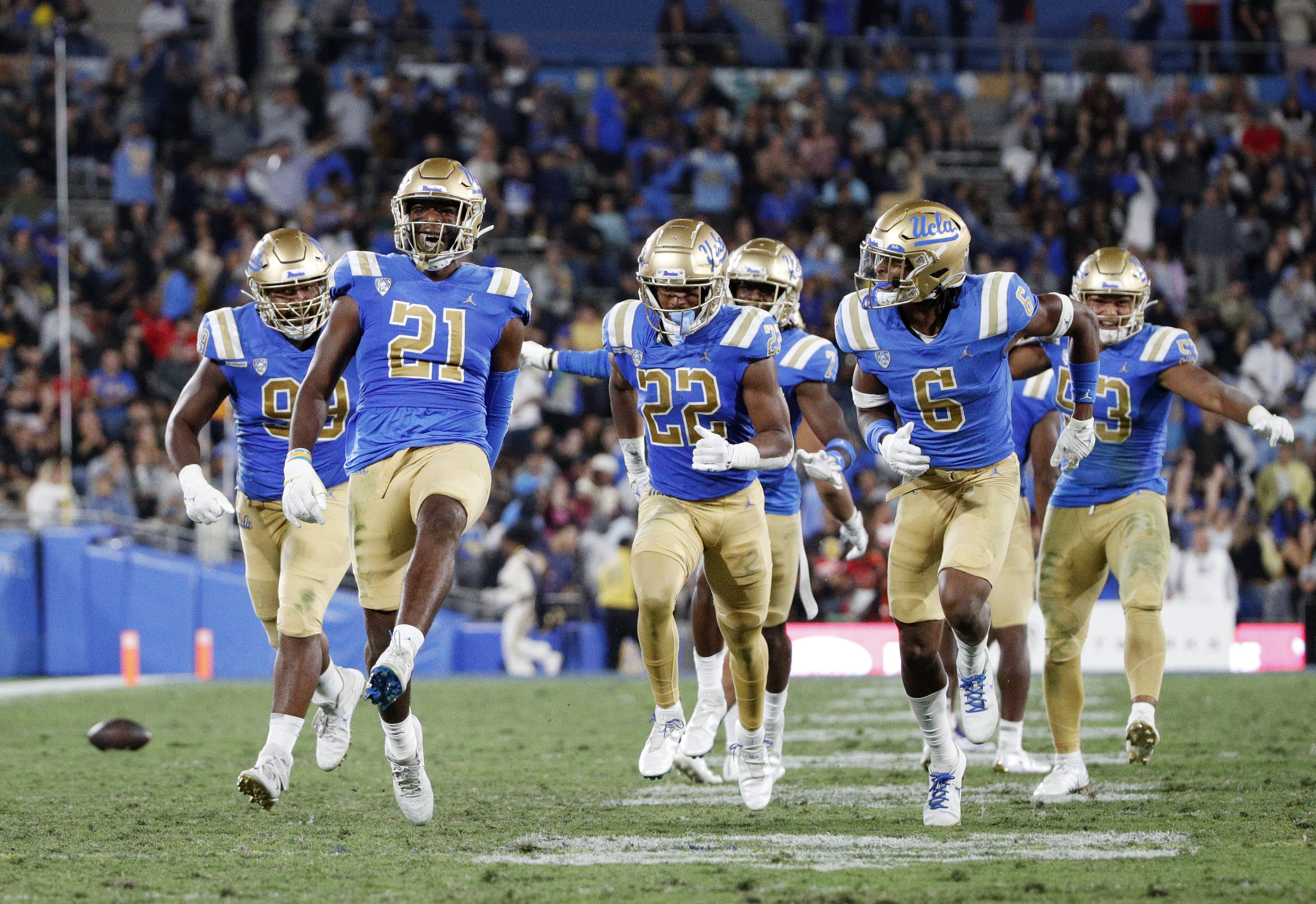 In their first game against a credible Power Five opponent, the Bruins hurdled skepticism like Thompson-Robinson leaped over a stunned Washington defender.

In their first game on national television, the Bruins blew past the jokes like Thompson-Robinson juked two Washington defenders into colliding into an embarrassing heap on a two-yard touchdown run.

In yet another opportunity to blow a big moment like this program has done so often, the Bruins held firm, converting two third downs in the final minutes while rolling downfield for a final drive to end it.

Their game-clinching play? On third-and-five? Would you believe a six-yard pass from Thompson-Robinson to Hudson Habermehl? It was one last daring act of trust in a veteran quarterback who is five seasons old and all grown up, going 24-of-33 passing for 315 yards and three touchdowns and no glaring mistakes.

“He doesn’t get phased, doesn’t get rattled, he’s as tough as they come,” said Kelly, later adding, “It was really cool … to see the way it ended.”

It’s equally cool to see the way these Bruins have started, now that their season is officially underway after four games against North-South-Alabama Something-or-Anothers.

It’s early, but they are 5-0 and have won eight consecutive games dating back to last season, their longest winning streak in 17 years.

It’s a small sample size, but they did just beat a team that had not trailed this year while dominating a quarterback who led the country in passing.

“This game is a race to maturity, you’re going to get tested, but competitors respond to those situations,” said Kelly. “There’s a resilience to this group, they’ve been through a lot. … Each week, they get a little bit better.”

Hop on the bandwagon with caution, as they host powerful Utah next week and then travel to formidable Oregon two weeks later.

And, of course, as always, believe in Kelly at your own risk, as his teams have never survived success, witness his 23-25 career record here with only two victories against teams that finished the season with winning records.

But, hey, give them this: In this season’s first chance to show up and show off, the Bruins were huge.

There was Thompson-Robinson, shrugging off first-possession wildness to show every bit of his veteran savvy with smart decisions, fearless sprints, 60 yards rushing, leadership everywhere. His hurdle will be a neat memory. His juking of the two Husky defenders will be a viral video.

Said Kelly: “We really have total confidence in everything Dorian does. I think he’s got a great grasp of what we’re trying to do.”

Rasped Thompson-Robinson: “I’m honestly getting more hoarse by the game.”

Then there was an offensive line that opened huge holes leading to 184 yards rushing, including 124 yards and a touchdown from Charbonnet. The Huskies only sacked Thompson-Robinson once, and were frustrated such that Duke transfer Bobo was able to wrangle free for 142 receiving yards and two touchdowns. 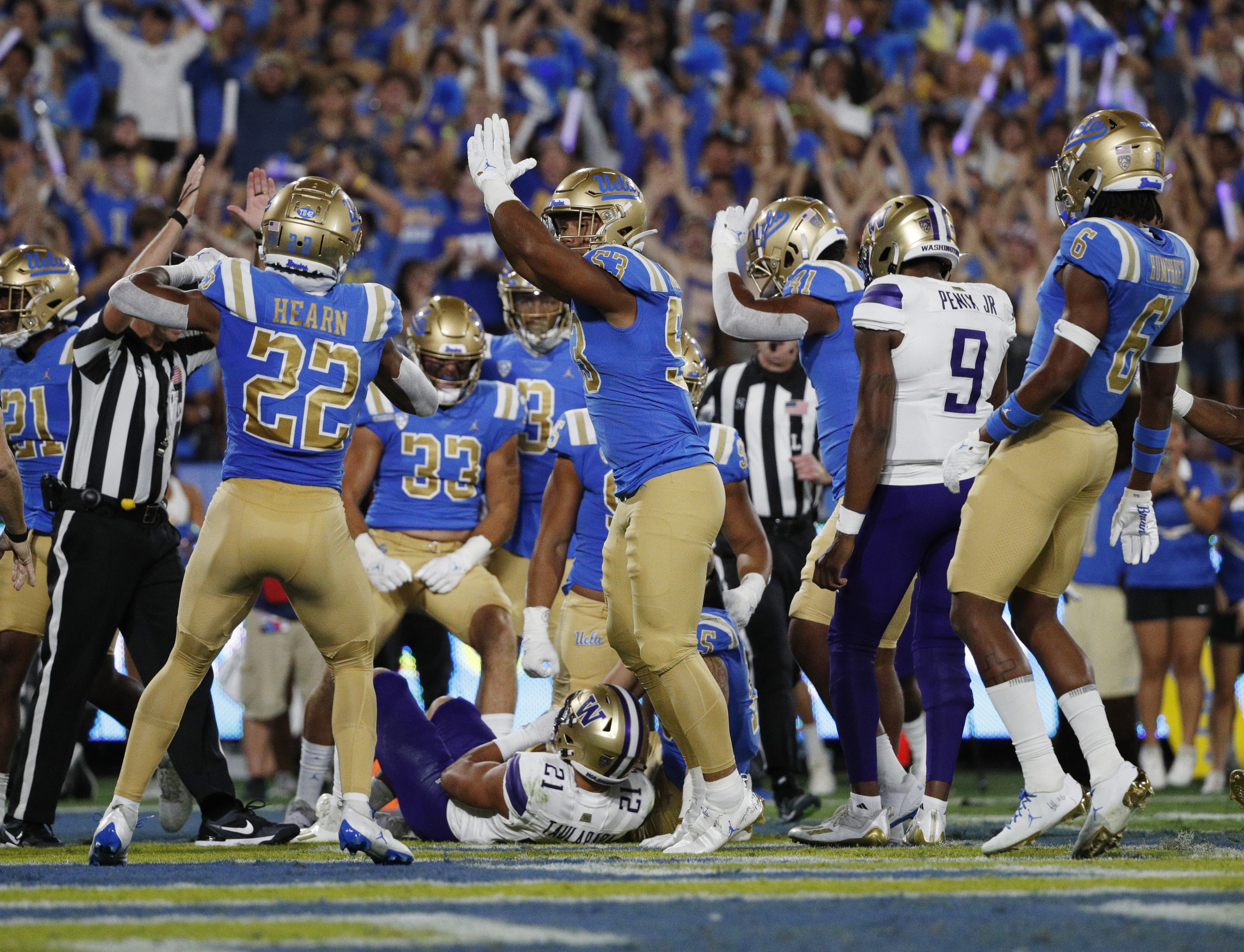 UCLA linebacker Darius Muasau gestures for a safety call after Washington running back Wayne Taulapapa (21) was tackled in the end zone Friday at the Rose Bowl. (Gina Ferazzi/Los Angeles Times)

“All those guys are starting to gel as a group,” said Kelly of a line that has three veterans in the middle surrounded by two newcomers. “I was proud of how those guys handled it.”

There was also a much-maligned Bruins defense that hounded star quarterback Michael Penix Jr. with first-half interceptions by Stephan Blaylock and JonJon Vaughns and all kinds of pressure from everywhere. They allowed 410 total yards, but much of that was gained after the Bruins had taken their big lead.

“For us to kind of hold them at bay a little bit, I think, was the difference,” said Kelly.

Hmm, here’s guessing that in this week’s Associated Press poll, they will receive more than the one vote they received last week. Although they have clearly learned to feed on the disrespect.

“I love it. I love it,” said Thompson-Robinson. “You know, I don’t stay on social media 24/7, all day every day like maybe most people think, but I do read it. I do read it. I get notifications just like everybody else does. And if you think words don’t hurt, they do. They do and I always remember even if I don’t say nothing.”

Besides their soft early schedule, before Friday the Bruins were also criticized for their miniscule support. In a small way, perhaps, that narrative for this season is also starting to change.

After three home games in front of empty seats that included two of the smallest crowds in UCLA’s Rose Bowl history, Friday’s game drew an actual crowd that made actual noise, so much that they even forced the confused Washington offense into an early timeout. The announced attendance was 41,343, which still isn’t great but is about double the average early crowds, and it mattered.

“It’s really important. … Friday night game in L.A. traffic, I saw three accidents on the way to the game. I’ll give credit to our police escort, they were weaving and dodging,” said Kelly. “For the people that came out … hopefully we ‘ll continue to get more of that.”

And to think, UCLA started out so badly, midway through the first quarter they were being booed.

First, there was Washington’s game-opening 75-yard touchdown drive that ended with a fourth-down, 33-yard pass from Penix to a wide-open Rome Odunze. It didn’t get any prettier after UCLA’s ensuing possession, when the Bruins failed three times from the Huskies’ three-yard line on three overthrown passes from a pressured Thompson-Robinson. The final miss was on fourth down, and here came those boos.

But the anger didn’t last. The game changed two plays later when Washington running back Wayne Taulapapa dropped a short pitch from Penix at the goal line, leading to a UCLA safety that started a run during which they outscored Washington 33-3. 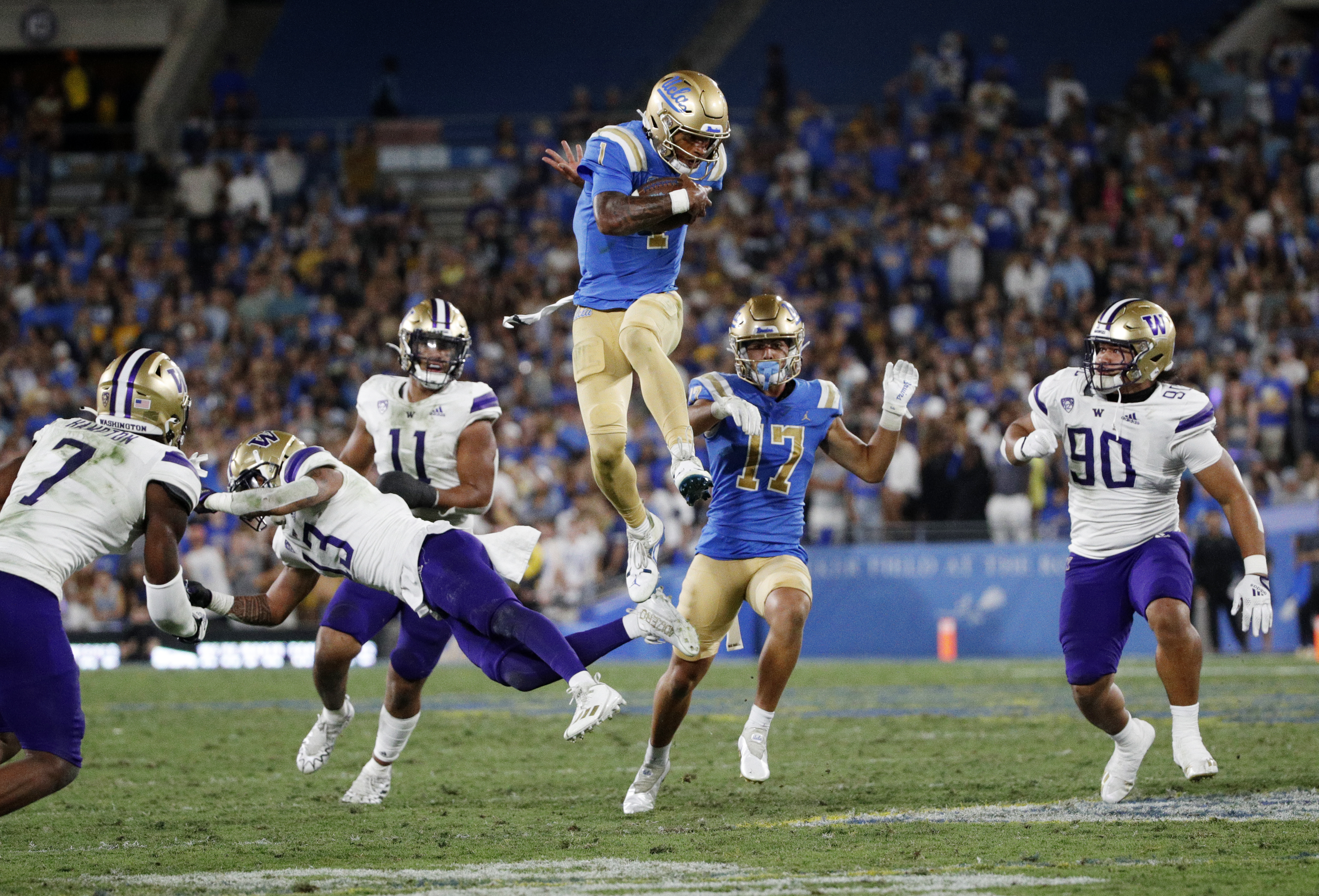 Next week, once again, with defending Pac-12 champion Utah coming to Pasadena, the football world will find out just how good.

“So that’ll get your eyes up, getting ready for that one,” said Kelly.

The eyes are indeed up, and opened.

Snow, rain showers to continue in parts of Puget Sound

I Filled My Trader Joe's Cart With As Many Holiday Products As I Could Find; Here Are My Favorites

Meet the Typhoon: Why Russia Built the Largest Submarine Ever

Joanna Gaines has been a mainstay on television for a decade, but the Fixer Upper star has recently opened up to share her own story, and the message is a powerful one. As a reality TV star, Joanna has given fans a glimpse into her relationship with her husband, Chip, ...


View more: Joanna Gaines Is Flooded With Support After She Breaks Down During Emotional Podcast

The US Department of Health and Human Services should be prepared to send doctors, nurses and medical staff to New York amid a surge in respiratory syntactical virus infections, Senate Majority Leader Chuck Schumer said Sunday. While the Big Apple reported a slight decline in RSV cases on Nov. 19, ...

The Giants have lost games this season, but not like this. Well, they actually did not lose a game on Sunday. It only felt like they did. When Graham Gano’s desperation 58-yard field-goal attempt fell far short, the Giants walked off the field at MetLife Stadium with a bizarre and ...

Netanyahu asked about Trump 2024: ‘Keep me out of it’ Incoming Israeli Prime Minister Benjamin Netanyahu would not wade into discussion of former President Trump’s third run for the White House on Sunday. Netanyahu, who is set to make his own return to power, was pressed by NBC’s “Meet ...

Rich Fury/Getty Images What do James Cameron and The Weeknd have in store for “Avatar” fans? “Avatar: The Way of Water” is set to swim into theaters later this month. The sequel to Cameron’s 2009 box office phenomenon has been over a decade in the making, with many questioning ...

A lack of staff has forced the psychiatric unit at Lakeshore General hospital to shut down temporarily. The West Island regional health authority says the hospital was operating with about 6 of the 9 psychiatrists needed to maintain a full 24-hour service some patients need. Those who are currently receiving ...

What Congress can do with Trump’s tax returns

Where did Earth’s oxygen come from? A new study hints at an unexpected source

'Everyone Should Have The Right To Their Own Opinion': Akon Under Fire After DEFENDING Kanye West's Praise Of Adolf Hitler

‘One of the oldest hatreds’: Netanyahu sees new source of antisemitism

Fatal crash closes I-95 a day after carjacking, gunfire and police chase

In the age of megachurches, communion has become a big business

'The Constitution is not the buffet at Mar-a-Lago': CNN's Acosta smacks down Trump's new election plan

Mach 3 Legend: How the SR-71 Spy Plane Was Born

France, Mbappe Are Oozing Greatness Again at This World Cup