Kings general manager Rob Blake said he wasn’t trying to send a message when he placed Cal Petersen on waivers and risked losing the goaltender who was supposed to be the foundation of the team’s future.

Even if Blake’s sole motivation was to help a shaky Petersen find his game — and even though Petersen cleared waivers on Thursday and was sent to the Kings’ farm team in Ontario, Calif., for extra work — Blake succeeded in jolting a team that has been negligent on defense and maddeningly inconsistent over the first third of this season.

The Kings have the most skill they’ve had in years after accumulating talent through the draft and acquiring winger Kevin Fiala, who leads them in scoring. Their power play, once a liability, has become an asset thanks to an infusion of creativity from new assistant coach Jim Hiller.

But their overall defensive effort has been glaringly bad, and it reached a low Tuesday in a wild 9-8 overtime loss to Seattle. Players spent Wednesday talking about Petersen among themselves, with the coaches, and with Blake. They spent Thursday morning greeting Pheonix Copley, who backed up Jonathan Quick Thursday night against the Arizona Coyotes, and welcoming newly promoted forward Samuel Fagemo to the fourth line and defenseman Tobias Bjornfot to a pairing with Matt Roy.

“It damn well should,” coach Todd McLellan said, “because we share in that transaction. All of us do.”

Intentional or not, it’s a statement they needed to hear.

“I think it’s a wakeup call for everybody in the organization. If you’re not performing … we all need to perform better. I think that’s just the bottom line,” defenseman Drew Doughty said.

“Defensively we’ve been really, really shaky for a lot of games and we haven’t helped our goaltending at all, to be honest. It’s a wakeup call to everybody. We need to step up and play better. We have a better team than we’ve shown this year. That’s it.”

The odds were against Petersen being claimed off waivers because the 28-year-old Iowa native is in the first year of a three-year, $15-million contract that includes a 10-team no-trade list. Barring a goaltending emergency, few general managers would be inclined to take on that much baggage for a goalie who has a 3.75 goals-against average and .868 save percentage this season, the fifth straight season his save percentage has declined.

Petersen was the opening night starter last season and was given many chances to secure a job as Quick’s successor, but he couldn’t seize any of them. Still, he was part of the team, surely a part of their future. Waiving him suddenly created the possibility he’d be in their rear-view mirror. For a group that’s still finding its footing and sorting out what it wants to be when it grows up, uncertainty was an unsettling addition to the equation. They were shocked.

“It sucked that it happened, to be honest,” Doughty said. 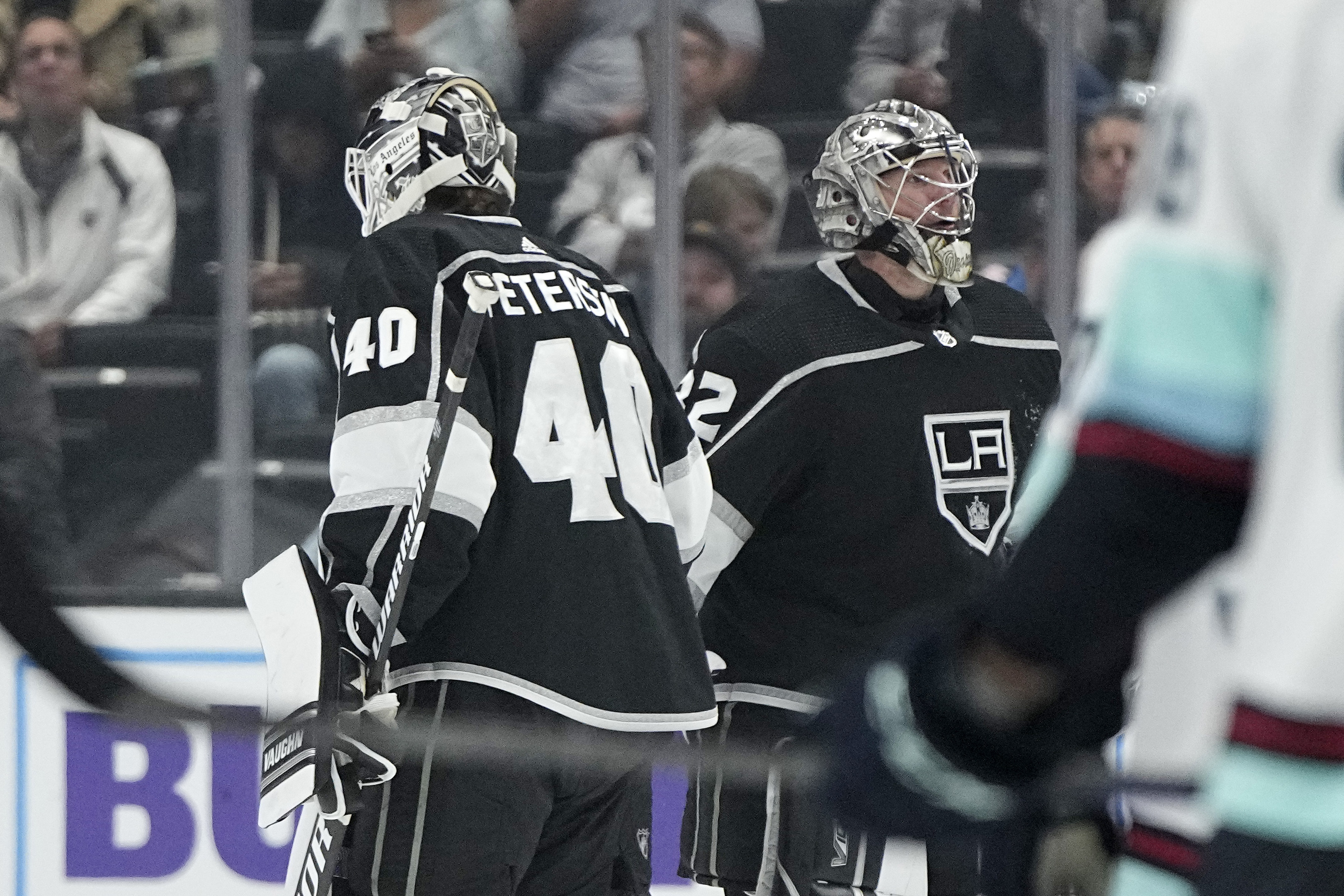 Kings goaltender Cal Petersen, left, and goaltender Jonathan Quick pass each other as the Kings switch goalies during the second period against the Seattle Kraken on Tuesday at Crypto.com Arena.(Mark J. Terrill / Associated Press)

Doughty made a point to assure Petersen that his teammates recognized they shared the blame for his woes. “I felt sorry for him because maybe he hasn’t performed to the best of his ability and he would be the first probably to say that, but at the same time we haven’t played well in front of him,” Doughty said. “There’s games where he’s given up four goals but he’s also saved like 10 that should have went in, too.

“That’s what I told him, too. ‘We haven’t been playing good in front of you so just go down there and play well and you’ll be back up here and we need you for the long haul.’”

Blake, who also sent forward Rasmus Kupari and defenseman Jordan Spence to Ontario, on Thursday, had his own conversations with Petersen. He wanted to be realistic but also encouraging. “We believe you’re going to be here with us helping us going forward, but we need to find a way to get you back playing the way you’re capable of and the way we feel you’re capable of,” Blake said in recapping his side of the conversation.

“What the idea here is Cal can go down to the American League and play in games and get that structure that we believe in and come back up and help us. That’s as simple as it gets.”

Speaking after the Kings’ morning skate Thursday, Blake also singled out the team’s ineffective penalty killing as a concern and said he wants to “find the underlying issues” behind the big discrepancy between actual goals against and expected goals against. “There’s some areas that we need to improve on. There’s some areas we’ve made progress for sure. The biggest thing is consistency, and I don’t think I’m the only one saying it,” Blake said.

That’s a clear and direct message, one they can’t afford to ignore.