Chris Nowinski had a bad feeling hours before the Dolphins kicked off Thursday night and a worse feeling after they did.

Friday, Nowinski, a leading expert on concussions, told The Post that he fears Dolphins quarterback Tua Tagovailoa may have permanent brain damage.

Nowinski, a Boynton Beach resident, had warned that if the Dolphins allowed Tagovailoa to play against the Cincinnati Bengals, it would represent a “massive step back” for concussion care in the NFL.

MikeMcDaniel: Tagovailoa had no concussion until Thursday, but games are secondary now

Game recap: A look back at Dolphins vs. Bengals 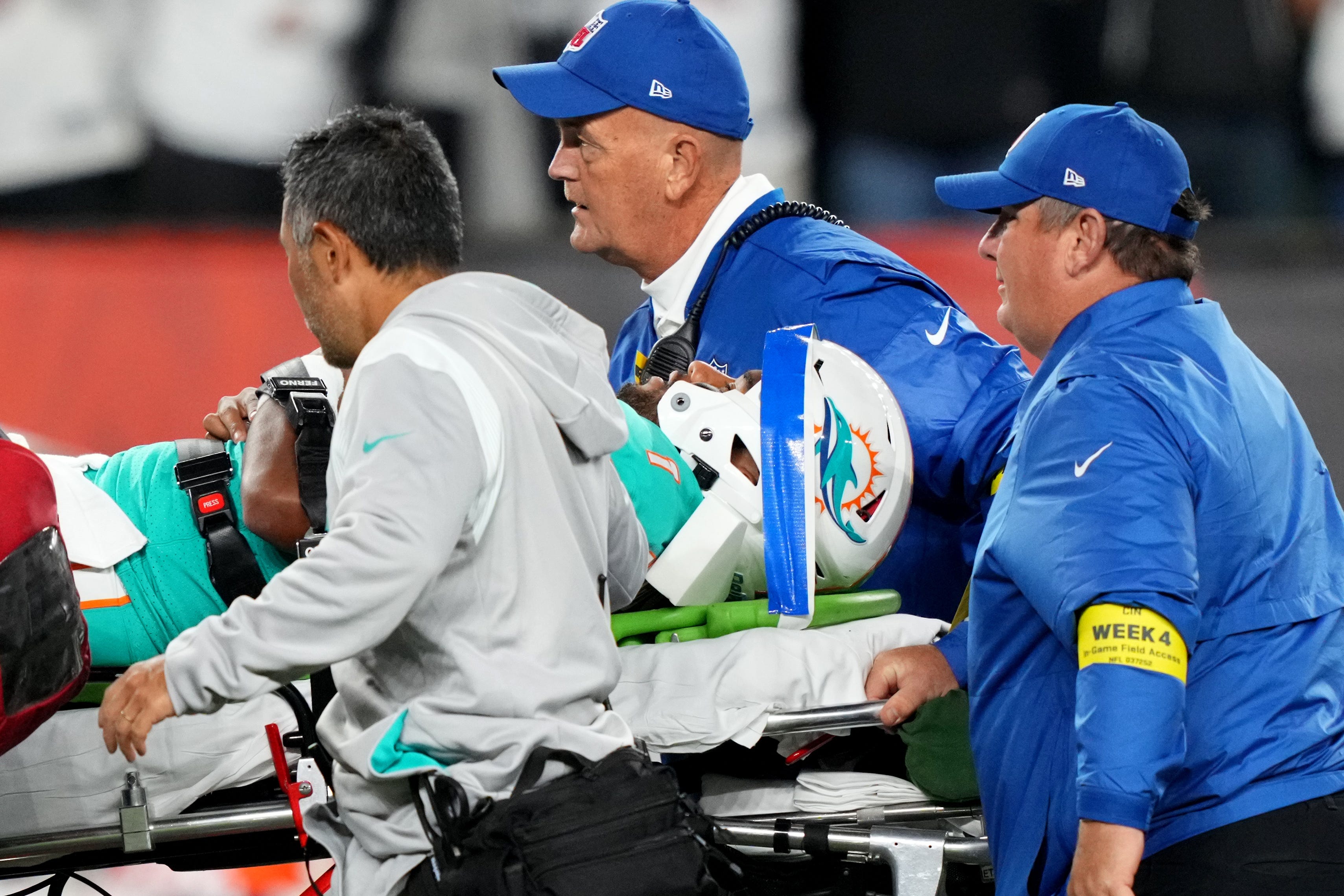 Miami Dolphins quarterback Tua Tagovailoa is taken off the field after suffering a head injury.

“If he has a 2nd concussion that destroys his season or career, everyone involved will be sued & should lose their jobs, coaches included,” Nowinski tweeted 3 1/2 hours before the game.

Tagovailoa did play and did suffer a concussion. Now the Dolphins and NFL are facing hard questions on whether the league’s concussion protocol either failed or was not adhered to, because Tagovailoa was playing four days after being injured against Buffalo.

“I’m going to take no pride in being right,” Nowinski said Friday.

It hit Nowinski both personally and professionally. He’s a co-founder and CEO of the Concussion Legacy Foundation, a nonprofit that helps lead research into traumatic brain injury. His foundation has studied the brains of Nick Buoniconti, Jim Kiick, Earl Morrall and other Dolphins after their deaths to diagnose chronic traumatic encephalopathy (CTE).

Nowinski also is a former Harvard football player and WWE performer whose wrestling career was cut short because of concussions. He’s constantly on the lookout for athletes enduring what he went through. Although the Dolphins say Tagovailoa did not suffer a concussion against Buffalo, Nowinski questioned that after seeing him stumble after hitting his head on the turf.

If Tagovailoa had a concussion then, it would mean he suffered two in four days. That’s not nearly the same as two concussions spread apart, Nowinski said.

“Essentially, your brain needs weeks or even more than a month to get back to normal,” Nowinski said. “And that means your cells are damaged and they need time to recover. They need time to get back to normal function. And if you have what we call a second neurometabolic cascade before the first one is resolved, you’re taking cells that would have recovered and you’re killing them.

Nowinski teamed with Dr. Robert Cantu to launch the Concussion Legacy Foundation in 2007, inspired in part by the suicide of Andre Waters, the former Philadelphia Eagles defensive back from Pahokee. The foundation now has a worldwide outreach. That and the number of years that have gone by add to Nowinski’s frustration over the handling of Tagovailoa.

“’It’s hard to watch,” Nowinski said. “Two concussions too close together ended my career, destroyed my brain, and it shouldn’t be happening to anyone else 20 years later.”

When Tagovailoa first went down against the Bills, he wobbled getting up and appeared to be shaking off cobwebs as teammates closed in to assist. To many, the scene showed the classic signs of a head injury. Reporters covering the game were informed that’s what he’d suffered. Since the injury occurred in the second quarter, Tagovailoa was examined on the sideline and in the locker room during halftime but played the entire second half.

It wasn’t until after the game that the Dolphins and Tagovailoa said he was checked for a concussion but never had a head injury. Instead, they said, he was restricted by back and ankle injuries.

Nowinski tweeted Sunday that he was calling BS “on the ‘back tweak theory.”

Friday, Nowinski said Tagovailoa showed “zero signs” of a back injury, adding, “No doctor should have believed that that was the cause of him falling, shaking his head from side to side like you’re shaking off the cobwebs.”

Thursday night, Tagovailoa went down again, this time at the hands of defensive tackle Josh Tupou, who body-slammed Tagovailoa on a sack. Cameras zoomed in on Tagovailoa’s hands, which showed fingers awkwardly bent. Later, viewers were informed that’s a classic neurological reaction when someone suffers a concussion.

So is it possible that Tagovailoa’s back tightened up on him in the Bills game as a neurological reaction as well?

“No, no, no,” Nowinski said, explaining that Tagovailoa showed five independent signs of a concussion Sunday, some of which never occur outside of a brain injury.

On Thursday, Tagovailoa was taken to a nearby hospital by ambulance but discharged and flew back to South Florida overnight with teammates. Friday, McDaniel said his quarterback was undergoing an MRI and it was too early to even consider when Tagovailoa might play again. He said he trusted that the concussion protocol was followed and stressed that he would never use a player who was physically unfit to be on the field.

“These are people that we mutually invest in and somebody I’ve grown very, very close to,” McDaniel said of Tagovailoa. “So when it comes to head injuries and concussions, with things that severe, the only thing I’m worried about is the person first.”

Nowinski questioned if the Dolphins or the league prioritized Tagovailoa’s health.

“To risk it, it just seems like we’ve learned nothing in the last 20 years,” Nowinski said. “It’s like this is a sign of a huge cultural problem in the NFL. Besides like a protocol failure, coaches saw him fall down after getting hit in the head and didn’t believe that he could have had a concussion. You just kind of wonder who these people are and how much they care about Tua as a person — how much they care at all about the long-term health of football players.”